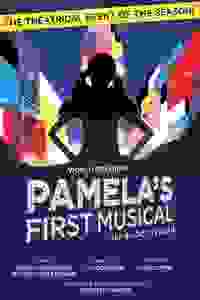 The musical tells the story of Pamela, an unhappy, imaginative young girl whose mother has died. Her father, though well-meaning, doesn't fully understand his creative, unusual daughter. When Pamela's eccentric and fabulous Aunt Louise sweeps her away on her birthday to see her very first Broadway musical, Pamela meets many of the colorful personalities of the New York Theater world. In meeting them and watching a clever musical-within-a-musical, Pamela discovers her tribe and the place where, as she sings, "all the pieces fit"-the world of musical theater.

See it if you want to see a solid, children's musical with great pedigree before it makes it way to Broadway.

See it if wish for a family friendly love for the theater show with inside theater references. done by a fun and good cast

Don't see it if music is still not quite there. could only really see this being done regionally or by high-school and colleges

Don't see it if You want real comedy and depth of character , this is okay but wants to be great Read more

See it if you want to see some great Broadway performers in a very comfortable theater. The music by Cy Coleman is nice.

Don't see it if if you want a coherent musical with a plot and concept that work together and makes sense. The musical needs a total overhaul.

Don't see it if you are put off by the hour train ride from NYP to Red Bank. The theater is a block from the station with lots of restaurants nearby

See it if You want to see a talent cast have a great time.

Don't see it if You want a complex or original story.

See it if you are a big fan of the children's book, David Zippel's lyrics, Carolee Carmello, Howard McGillin, Andrea Burns, and David Garrison.

Don't see it if you are expecting the usual high standard of the late Cy Coleman's music, an interesting book, you don't want 2C a dated Auntie Mame clone.

“A delightful production...Daniele directs this production like a Broadway musical in miniature. All the pieces for something bigger are here: a great cast, memorable songs, and a fast-paced, exciting narrative. But for a show about the Great White Way, ‘Pamela's First Musical’ feels small...Yet...there's much to recommend. Its story will appeal to younger audience members, while its satirical jokes and insider references will amuse theater-loving grown-ups.”
Read more

“Musical theatre lovers and many more will be delighted by this dazzling, enthralling production...A show that will surely be enjoyed by a broad audience of theatergoers including families with youngsters...’Pamela's First Musical’ is spirited and heartfelt...The highly accomplished company electrifies the stage with their musical prowess and wonderful character portrayals...The musical score of the show is an ideal complement to the story along with the lively dance numbers.”
Read more

“Nearly everything a parent could want in a child's first theater experience...The show boasts a creative team with a miles-long list of accomplishments...But...This roster of theatrical titans seems to have preferred...a dramatized children's story told with a stripped-down simplicity...The cast is not given much room to shine in the simplicity of the characters, but high points nonetheless emerge...This show offers great fun for the young and musical-curious...Don't expect much beyond that."
Read more

“Bland and unmemorable at best and shockingly tone-deaf at worst. Those who harbor warm feelings toward Wasserstein or Coleman should stay far away, lest their memories be spoiled...Although Daniele manages to stage an entire musical-inside-a-musical, she never captures the sense of a little girl falling in love with the art form...More pointedly, neither play nor production gives a strong sense of what Pamela longs to escape from...Essentially a piece of fluff.”
Read more

“While ‘Pamela’s First Musical’ boasts credentials equal to those precursors...The show, if not the production, suffers in comparison; that storied foursome are not at the top of their game...It is entertaining, but not, one suspects, to the extent it must have been to those creators...It’s essentially an extended inside joke..It remains a collegiate enterprise, albeit an accomplished one...A striking production...with eye-catching sets."
Read more

"This show is, in a word, wonderful...The score is rich with more-than-occasional wit...If you love musicals, especially the ins and outs of their creation, you should see this show. If you know girls and boys who are interested in the theatre or are highly imaginative, you should take them to this show...The show is corny, and charming, and utterly irresistible. Allow yourself to be perfectly delighted by this gem of a production."
Read more

"Billed as a valentine to Broadway. It’s that, and much more, including an unexpected moral to the story...It’s a great introduction to how the theater works to create a live musical performance, plus plenty of references and nuances to keep adults and musical theater lovers entertained...A big round of applause for the ensemble that played a cast of thousands."
Read more

"Director and choreographer Daniele delivers all the necessary camp and pizzazz, but also gives us beautiful moments of stillness...'Pamela’s First Musical' transported me back to when I was a similarly precocious child seeing my first Broadway musical, a feeling of nostalgia that is, to me, more than worth the price of admission. While the show is written for a theatre-savvy crowd, it can still be enjoyed thoroughly whether this is your first musical or your thousand-and-first."
Read more