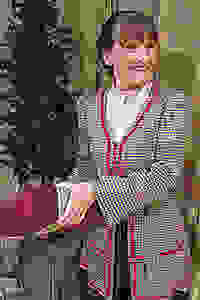 View in admin
The Great Tree and Other Tales by Zona Gale
NJ: Cape May
Score it Scored!

"Gayle Stahlhuth is a master storyteller.” - from Dottie Knapp's review for Exit Zero

Gayle Stahlhuth adapted stories by this Pulitzer Prize-winner, and performs them as Calliope Marsh, Gale's wonderfully fictional storyteller who lived in Friendship Village, Wisconsin. In “Human,” while at the post office, she discovers that a seven-year-old boy doesn't have the money to visit his mother who’s in a hospital in another town. In “The Great Tree,” she’s determined to see the tree in the center of town lit with electric lights for Christmas Eve. All of the stories are taken from her books Friendship Village (1908) and Neighborhood Stories (1914). Gale adapted her novel, Miss Lulu Bett, for the stage, for which she received the Pulitzer Prize in 1921 when it was on Broadway. Stahlhuth has been delighting audiences with her unique one-person holiday shows in Cape May since 2005. This was first performed in Cape May six years ago under the title “Christmas in Wisconsin.”