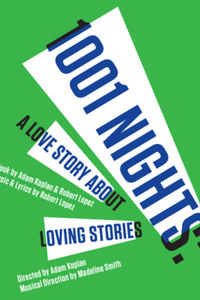 In this celebration of brainy imagination over brawn, a princess uses her wits to save a kingdom from an evil decree as she spins tale after tale for a narrow-minded king. This playful adaptation of the 'Arabian Nights' fairy tales is recommended for ages 6 and up.

See it if You want to see a ambitious, but confusing musical going back and forth between the Arabian nights and modern NY told in song and dance.

Don't see it if You don't enjoy non traditional musicals that try to be quirky and hip, but don't always succeed.

See it if you enjoy hearing excellent voices and seeing a musical you won't see on Broadway. It is a bit different.

"Mr. Koplan has nimbly directed the 70-minute production, which frames the grim premise in a nonscary way...It’s hard to say what’s funnier: the many rhyming jokes or the stage business, which includes an 'Open Sesame,' 'Shut Sesame' routine that’s like 'Who’s on First' in ancient Arabia. The show’s feminism, though, feels 21st-century fresh. Sherry/Scheherazade always triumphs, whether she’s pitted against a homicidal king or a homework-obsessed dad."
Read more