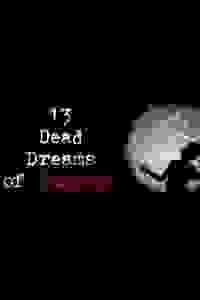 This two-person shadow-puppet play with songs revolves around a bizarre true story of Midwestern town who blames a spate of nightmares on the unidentified corpse the town displayed for decades. More…

In 1929, a dead body is found and placed on display in hopes of identification. That's when "Dead Dreams" began: experience-shared recurring nightmares of that haunted sleepy town of Sabina OH, and the stranger-than-fiction story of Eugene.

See it if wacky, creative Fringe piece. Highly atmospheric, but gets stale. Both performers can sing/act. A step-up from campfire ghost stories.

Don't see it if you want a polished, coherent experience. Visuals were not great. The dreams are, eventually, annoying. Underlying real story fascinates.

See it if You’re intrigued by shadow puppets and projections used to tell a story.

Don't see it if You hope for the story to be very exciting. In the total darkness it felt a lot like a bedtime story and it was hard to stay awake.

See it if Show is in the dark with flashlight and shadow on white screen, with sound efforts. Singing and tell story.

Don't see it if Want a high production. This is in a small theater.(seats are comfortable)

Also This remember me of a camp fire stores. You talk about ghost and ghoul anything scary. The story were OK not over scary. The performer did a good show.... Read more Read less

See it if you like hearing ghost stories and truly haunting conceptions of the afterlife. Literary—some wonderfully chilling writing.

Don't see it if you’re judging the scare factor by film standards. Jump-out-of-your-chair terror is hard to come by in live theater.

Also Pros: The show has mystery in spades. Each dream a gothic vignette within an overarching campfire story that’s actually the best of them all. Like a 1-hour mini anthology of short horror fiction.

Cons: This is really low tech even by shadow standards. (I love shadow plays and went into this expecting elaborate puppetry.) It’s not badly done, just relatively simple. Visuals set the tone but aren’t the main attraction—the best imagery is in the narration.

Script is riveting in a way you can only get from the macabre and I don’t see a ton of plays doing that. The show isn’t so calculating as to enforce a moral or theme, but interesting patterns do emerge in the dreams. Made me think about our current reality as someone else’s afterlife. Creative presentation of a really original story.

See it if you like camp-fire stories. Interesting shadowplay. The ending wrapped up the show very nicely.

Don't see it if you want a polished show - remember this is part of Fringe. The actors told us the props were home-made. You don't like the dark.

Also The story lags a little, but the ending made me glad to have seen the 60 minute lead-up. The show has a home-made feel.... Read more Read less

See it if you enjoy based-on-true-events campfire ghost stories, & are ok sitting in the dark (mostly), except for minimal lighting from the stage.

Don't see it if you expect an extremely polished performance. Here, homemade "arts & crafts" are used to create an interesting hr of creepy story-telling.

This is yet another production that won an award @ the 2018 Orlando Int'l Fringe Theatre Festival ("Best Show" Critics Choice Award), so we expected a lot. Perhaps we were in the right frame of mind to relax & take it all in w/an open mind.

Based on a true story about a corpse found in a small town in Ohio, & placed on display in hopes of identification. Soon after, the 'dead dreams' & nightmares began. Good premise, nicely presented, w/some creepy story-telling & cool visuals. We were NOT expecting the songs & guitar-playing (so much so that we both jerked in our seats as if something scary had happened, then proceeded to embarrassingly chuckle).

We say go w/an open mind. It's an hr of old-school camp-fire fun.

See it if You enjoy other musical mystery/horror/ghost stories like Whisper House, Nevermore, Sweeney. Want to see some great inventive direction.

Don't see it if You dislike pieces that are made up of vignettes that do not all move the story forward.

Also "Everything starts with something that really occurred. A lot of what I do is like collage, I guess. I find these little bits and pieces, I spread them out on the table, and then I find ways to connect them in an interesting way." -Paul Strickland

Paul Strickland said the above in reference to his stand-up comedy but it's certainly true of 13 Dead Dreams, co-written with Erika Kate MacDonald.

The show is served well by its sense of economy. What's neat is that this show could be done absolutely anywhere, in any venue. And I hope they take advantage of that fact and tour this in some great eerie locations come next fall.

The original music is good, though there is a clear standout. The song I will call, "If You're Fingernails Fall out." I cannot recall which numbered dream that one is, but wow.

The show has a wonderful structure to it. A great balance of vignette and main storyline. And it ends with something that is a perfectly tied bow and a question mark at the same time.

Gale
New York City
65+ | Female
247 reviews
Get Alerts Alerts On Alerts Off
60
Interesting premise, "fringey", Has moments, Not scary at all
November 6th, 2018

See it if you are an adventurous theater-goer and are willing to take a chance on new & unique performances; like mildly 'spooky' stories

Also This show had an interesting 'true story' going for it & the investigative personal aspects were the most compelling. It would've been soooo much better if this was done in a much simpler, straight-forward way as a narrative, keeping the nice shadow & light elements. As is, there are too many bells and whistles, too many pauses to change the props. Ditch the irritating guitar & just sing the story in a less 'emotive,' more "Poe-like' fashion and you have a sad, poignant horror tale,... Read more Read less

Don't see it if Very low tech-intentionally I'm sure- but would have benefited from some more polished effects (and more of them) Dragged a bit.

Also You know how listening to someone relating a dream can be pretty boring because there's no real story? Well, listening to a dozen sketchy dreams is a bit too much. I started counting down around 7.... Read more Read less

Mary Siobhan
Yonkers
50-64 | Female
201 reviews
Get Alerts Alerts On Alerts Off
56
Good ideas not developed, We know it's fringe but this is too stripped down - needs some more production of any kind
November 7th, 2018

See it if You are not judgmental & you enjoy stripped down experimental theater.

Don't see it if You are wanting good shadow puppets or particularly scary material. The marketing builds expectations - that get let down.

Also Based on real events the plot is of a communitiy that discovered a dead Black man on the side of road. No one identifies him. Apparently at the time unidentified bodies sometimes laid in state for identification purposes. BUT for decades ?! until 1963?! Why? - He had became a curiosity - a tourist attraction. This is both such a startling & racist set of circumstances that the story itself, not the dead dreams, deserve more examination. Might he have been a victim of racist violence? How did race factor in not burying him sooner?

Multiple people in this town are said to have had the same dreams over & over again - producing a belief that these were the dreams of the dead man - temporarily possessing or haunting those people. The idea of that phenomenon would also have been more interesting than the dreams themselves.

The dreams are told through verse, song & shadow puppetry - a cool idea but not particularly well executed.

See it if You line slightly spooky stories. Interesting perspective on ghosts and atmospheric and creative low budget plays.

Don't see it if You like coherence and a continuously interesting play. My attention waned quiet a bit and the songs did not hit me well save one.

See it if you like ghostly, goose-bumpy tales based on true events; you enjoy sitting in the dark watching shadow-play mixed with narrative & songs

Don't see it if you need high production standards & a show created with handmade items would fail to engage you; if corpses & morbid topics are distasteful

Also An interesting premise, developed with a lot of handmade artistry [such as dead hands typing a letter on an old-fashioned typewriter -- seen in shadow-play], "Eugene" is intermittently engaging. Some of the 13 "dead dreams" are better than others.

Though the narrative can be slow at times, you will not come away feeling you've seen it all before. Paul Strickland & Erika MacDonald, Fringe vets and capable raconteurs, have drawn on original songs, guitar music, lighting, and shadows to set a rather creepy atmosphere.

The simplicity of their methods will remind you of an earlier era in your theatre-going days.

No moral to the story, no final resolution -- just a nifty campfire tale.
--
Background: In 1929, the body of an unknown black man was discovered in a ditch along a highway in Sabina, Ohio. "Eugene" was embalmed but not buried until 1964. After having unsettling dreams, townspeople wrote to the local paper.

See it if you enjoy a mediocre ghost story

See it if Intelligent and creative smaller shows are for you. Highly compelling creatives onstage. Cheers!

Don't see it if Spooky, darker themes upset you.

See it if you like refreshing puppetry, great spooky and fun story, seamless movement,

See it if you enjoy gothic horror, you want a different type of theater experience, you want to see something refreshing, and/or you like weird shows.

Don't see it if you're not a fan of the dark, you don't enjoy ghost stories, you don't like experimental theater, and/or you get scared easily.

Also This was one of the most interesting and enjoyable shows I've ever watched. As a fan of Poe and Lovecraft, I enjoyed the creepy, macabre vibe of the show. The story was well written and the staging well thought out. A town plagued by dreams from a ghost who doesn't know who he is. The creepy vibe was there and the use of shadows only served to intensify it. Overall, this was a great horror show and I highly recommend for anyone who enjoys gothic horror or shows like "The Twilight Zone." If you're scared of the dark or have light sensitivity, then you might want to avoid the show as it is told entirely in the dark and utilizes different types of light effects to tell the story. I DO NOT recommend for younger children as it can be scary to them.... Read more Read less

See it if you enjoy a good, creepy yarn delivered with a clever, artistic, theatrical shadow-play device.

Don't see it if you’re scared of the dark or ghosts or you’re afraid of taking a risk on highly theatrical work.

See it if you enjoy a great campfire, ghost story. Very creative use of shadows and lighting. Great storytelling. Creepy use of sounds.

Don't see it if you want a traditional play. Don't enjoy storytelling. Don't like singing.

See it if you're into experimental theatre and creative staging: puppets, light and darkness, stories, songs... a little bit of everything.

Don't see it if you would like one coherent narrative rather than a series of vignettes, or if you are easily scared.