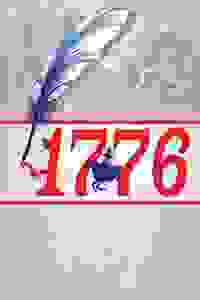 Encores! concert version of the Tony Award-winning musical about the birth of our nation features TV stars Santino Fontana and John Larroquette as founding fathers.

Before 'Hamilton' there was '1776,' a musical about how the founding fathers drafted the Declaration of Independence and gave birth to a new nation. A show that presents John Adams (Santino Fontana), Thomas Jefferson (John Behlmann), and Benjamin Franklin (Tony winner John Larroquette) in all their fractious complexity, the Encores! concert will remind you of how far America has come—and how little we’ve changed.

See it if Great production. Incredible talent. Fontana is an outstanding lead and singer. Cudos to Larroquette too. Powerfully acted.

Don't see it if It's a (more than) concert version. Allows you to pay attention to the writing and the acting. For a musical there's long non-singing parts.

See it if You enjoy history and politics. The talent is excellent and there are some nice musical numbers.

Don't see it if It's an informative piece so if you aren't a history buff your mind may wander during the dialog heavy scenes. Could benefit from more music

See it if you love the smart, funny, engaging script/songs. Although quite long, it moves quickly. Mostly well-sung and acted. Not much staging.

Don't see it if you want a stellar production. Modern dress wrong for historical piece. Larroquette disappoints as Franklin, stepped on jokes and can't sing

See it if you have a time machine. (I just saw the final performance.) But if there's ever a fully-staged revival, see it for the classic book & score

Don't see it if you need the sets, costumes, choreography, etc. to enjoy a musical.

See it if /for strong performances by many of principals particularly Santino Fontana as John Adams, Christiane Noll as Abigail Adams; fine orchestra

Don't see it if /since not a very good musical: songs are pedestrian and jokes and gags are obvious; still inspiring in this ugly era of political gridlock

See it if you're into historic pieces with a modern twist. The actors in this production wear business suits, supporting the show's relevance today.

Don't see it if you don't like true stories that take creative liberties.

See it if you're a big Santino Fontana or John Larroquette fan (they are terrific).

Don't see it if you prefer your musicals to have songs in them. (There is so much talking in this show.)

See it if You are curious to see this show. The acting and singing are excellent. It's Interesting to compare it to Hamilton.

Don't see it if If you want a light fluffy musical. It has more talking and fewer songs than you'd expect. And of course a serious topic.

"'1776' can sometimes feel like C-Span set to music...Your instinct is to yell down the corridors of history, 'Pick up the pace, guys!' You may occasionally feel like shouting the same instructions at the cast members onstage...This cleanly mounted production begins with marvelous gusto...Mr. Fontana shoulders the responsibilities of a leading man with irresistible focus and passion…What was, and remains, revolutionary about ‘1776’ is that it dares to be as dull as real politics can often be."
Read more

"That Edwards’s songs are so secondary, and Stone’s book so good—certainly one of the best ever written for a musical—makes '1776' an unexpected choice for the Encores!...The sound from the orchestra is glorious and so is the production. Under Garry Hynes’s patient, probing, and emotionally vivid direction, it ranks as one of the best of the 68 musical revivals Encores! has offered...The actors thrillingly succeed in making the drama play as if it never happened before—onstage or off."
Read more

"While this current incarnation is not perfect, it nonetheless makes a compelling argument that the show would find receptive audiences for a commercial run...The book by Peter Stone is considered one of the finest in all of musical theater...Considering the show's considerable demands, the ensemble is largely fine despite their limited rehearsal time...The marvel of this show is how it manages to keep us in suspense even though its outcome is known to all...'1776' makes history come alive."
Read more

"It’s witty, intricately plotted and surprisingly suspenseful. As John Adams and Ben Franklin, respectively, Santino Fontana and John Larroquette drive the show with the energy and chemistry of a comedy duo...Director Garry Hynes adds sly curveballs, like the casting of African-American Nikki Renée Daniels as Martha Jefferson. But what’s most striking is how powerfully '1776' argues for unity, honor and, yes, compromise—a resonant note in our divided times."
Read more

"Long-winded scenes without music are as enjoyable as taxation without representation. Stretches of the almost three-hour show are a slog. Still, Stone’s witty jokes about a do-nothing Congress never fail to hit the mark. Polarizing founding father John Adams does gags that could work for a Jimmy Fallon monologue...Set over three tempestuous and bloody months running up to July, 4, 1776, the show’s return is perfectly timed for current, high-stakes politics."
Read more

"Although Sherman Edwards’ score is thoroughly winning, '1776' revolves primarily around Peter Stone’s witty, dramatically-charged book…As staged by Irish director Garry Hynes, this is a lean presentation of the musical that would have been even more effective and fluid had the actors benefited from a longer rehearsal period. Santino Fontana is unusually likable and photogenic as the 'obnoxious and disliked' John Adams, but still captures the character’s fervor and fighting spirit."
Read more

"A superb concert production of a somewhat lackluster musical (but better play)...Under the direction of Garry Hynes, Peter Stone's extended book scenes come alive, so much so that we often forget we are at a concert presentation...But unlike most musicals, the score is really not the main course...While there are aspects of '1776' that don't seem to mesh with reality, it is more truthful than not and certainly gets us thinking about the foundational battles of our union."
Read more

"One of Broadway's finest-written musicals not only serves as a great history lesson, but also strikes many newly-relevant chords...Musically, this '1776' succeeds greatly. However, this is the rare musical where the book is so strong that many of the evening's emotional high points are spoken, so in this case the numerous cuts decrease the drama's effectiveness...The production has the makings of one that could really gel together into something fresh and invigorating."
Read more