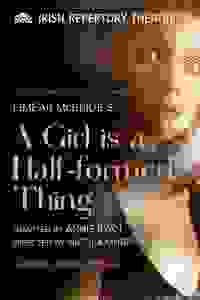 View in admin
A Girl Is a Half-Formed Thing (Irish Rep)
NYC: Chelsea
80
Score it Scored!

A theatrical adaptation of Eimear McBride daring, debut novel of the same name.

A stunning portrayal of a girl's psyche from birth until her early adult years. This theatrical adaptation of the critically acclaimed A Girl is a Half-Formed Thing reignites the novel's exploration of sexuality, resilience, poverty, and isolation set against the backdrop of crushing Catholicism. Adapted for the stage by Annie Ryan, the show had its North American premiere in 2016 at the Baryshnikov Arts Center.

Don't see it if violence is an issue. Although the events are described as opposed to acted out, the play is graphic & horrifying. It's also hard to follow

80
Excellent acting in difficult and traumatic role, 80 minutes no intermish, Difficult to follow at times, One woman monologue, About the trauma of abuse

See it if Want to see a fine actor take on a very difficult monologue. Have interest in the traumatic impacts of childhood & adolescent trauma.

Don't see it if You avoid references to sexual and physical abuse. Do not like monologues or small, very claustrophobic theatre spaces.

See it if You enjoy monologue plays. Enjoy stream of consciousness.

Don't see it if You enjoy dark pieces that also contain hope and levity. Read more

See it if You want to see a powerful one woman show about a young girl growing up in Ireland under very hard conditions. Every movement had a meaning.

Don't see it if You will be upset by rape, violence, child abuse, and death. However, the storytelling is exquisite and draws you in from the beginning.

See it if you would enjoy an amazing solo performance by an actress. Otherwise, I cannot think of a reason to see this.

Don't see it if are not interested in an extremely disturbing portrayal of a very damaged person. Read more

See it if Like Irish storytelling and provocative and difficult material

See it if you are looking to see a first rate performance by a gifted actor. The material is choppy, but she conveys EVERYTHING with emotional clarity

Don't see it if you don't enjoy non-linear storytelling, poetic speech structure, or stories involving rape/incest. It is a difficult story to watch.

See it if You want to see a phenomenal performance. You want to experience a profound night of theater that will stay with you.

Don't see it if You have trouble with profanity or sexual explicitnesses You have difficulty with accents.

"Critic's Pick!...Directed by Nicola Murphy on Irish Rep’s tiny second stage, Jenn Murray rides the current of the monologue like a river, navigating its rapids and eddies, and stretches of calm, with a deftness that easily brings the audience along. On a spare set by Chen-Wei Liao, abetted by Michael O’Connor’s lighting and underscored by Nathanael Brown’s subtle music and sound design, Murray slips in and out of a crowd of characters with near-total legibility."
Read more

McBride's writing, however gorgeous, is densely constructed, a thicket of words that require time to sink in -- more time than a theatrical experience can spare. She once told The Guardian, that, upon reading James Joyce's Ulysses, she decided, "Everything I have written before is rubbish, and today is the beginning of something else." That turned out to be a Joycean stream-of-consciousness combined with a Beckettian austerity of vision. A Girl is a Half-Formed Thing is a piece of remarkable integrity, but it is a relentless, exhausting account of a loveless life.
Read more

Far more profound is the extent to which she embodies each person the girl mentions, giving them life-like dimensions and, thus, indisputably justifying the entire adaptation's existence. Besides her incredible skill, the core of Murray's remarkable performance (or performances) is her bravery, which the equally fearless writing requires...
Read more

"This is one of those theatrical experiences not to be missed, where everything falls into place. And like Halley’s Comet, it is here for a brief moment and then gone with only the memory of the light and the heart-stopping encounter."
Read more