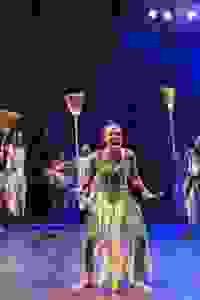 A lovers' quarrel, a host of fairies, unrequited affection and that pixie Puck create an evening of pure magic. Mixed messages, misunderstandings, and magic lead lovers awry and will leave the audience questioning which wedding we'll attend before the story ends. In this operatic staging of Shakespeare, exhilarating orchestrations of marimbas, djembes and ululation resound with South Africa's rich choral traditions when the commanding cast of the Isango Ensemble lifts up their voices to weave African folklore into Shakespeare's most celebrated comedy.

See it if if you like the classics and know this story well.

Don't see it if must concentrate can be confusing at times, over the top some times, not the best I have seen.

See it if you like innovative theatre and opera - not sure all kids will be able to understand - however the music, dancing & staging are engaging

See it if you've outgrown the Lion King

Don't see it if you dislike foreign languages

See it if You’re interested in the play and Shakesphere

Don't see it if You can’t understand that

Don't see it if lol XDDD

Don't see it if You have no imagination

See it if It was free

Don't see it if Cost too much

"With this inventive adaptation the Isango Ensemble claims Britten’s work on its own terms. Rightly so. If Britten could turn a Shakespeare play into a 20th-century British opera, why shouldn’t this ensemble turn that opera into a 21st-century South African theater piece?"
Read more

"If you are thinking about bringing your kids to this Shakespeare production, you might want to read them the play first. This version is an opera, but the plot is a little convoluted...For those who love opera, these voices are glorious, the musicality is superb and this is a unique version complete with masks and tribal dances."
Read more

"This super-energetic interpretation doesn’t take any such factors too seriously or too strictly. Sure, the plot, as it survives, still toys with quarrelling lovers, misplaced fairies, a finagling arch-pixie and timely intrusions by a brash band of mechanicals. Though reduced to two hours, the show bumbles, tumbles and rumbles along merrily, vocal outpourings of varied intensity accompanied (or contradicted) by gutsy percussion."
Read more

"I thought this blurring of Shakespearean and South African characters such as the fairies and Puck was really magical…The first half of the play did at times feel confusing…The second half was more energized…The cross cultural exchange felt fluid and celebratory and we all left the theatre feeling totally enchanted."
Read more