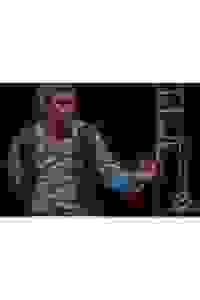 A Solo From The Pit

Musician Elias Faingersh plays us through a comedic crash course in finding operatic (and personal) meaning, as he recounts his decision to leave a coveted position at the Metropolitan Opera in this solo show. More…

This story is about the choices faced by most people — whether to pursue comfort and security or follow their dreams. Combining music, comedy and candor, this show is a peek into a composer’s mind.

See it if you love trombone, but it's painfully over-amplified. Some fun opera discussion and melodies. Uses musical repeater for back-up.

Don't see it if you want truly funny patter (SOLO is lame) or dislike misogyny. Even 60mn is too long. Opens w off-putting song. Not esp'ly moving/inspiring

Also This show rubbed me the wrong way, but many in the audience enjoyed it. I found the music WAY TOO LOUD (the space is small) and the "jokes" not funny. Twice, Faingersh mouths "F*ckin' bitch." His view of women seems inappropriately negativ. He thinks himself a hero for leaving the opera world and exploring more experimental music. The riffs on opera, though, were more fun to listen to than his own work.... Read more Read less

See it if You want to see something new, fresh, original and inspiring. Plus you might just learn something about opera.

Don't see it if You don’t like original music or hearing about other people’s journeys in life.

See it if You have an interest in opera. You want a modern take on opera stories & a memoir from an orchestra musician. You want original music.

Don't see it if You prefer a more seasoned performer: while his stories were enjoyable to hear, his delivery is awkward. You have no interest in opera.

See it if Play with trombone player with storys, some are funny. Music is refreshing and clever.

Don't see it if you hate the trombone sound. Loud music at times.

Also Deals with familiar operas in his style of music. Refreshing and clever different way of music. Sometime it too much and too loud.... Read more Read less

See it if you like opera classics remixed, modern day verbal & musical interpretations of ludicrous opera plots. Point of view of a pit defector.

Don't see it if dislike live looping, want more reverential fare. Has what I can only describe as a crazy-uncle-from-the-old-country sense of humor.

Also Super impressive soloist. I liked the show's music & technical facility. Don’t know the right terminology for this but Faingersh live loops successive layers of brass sounds, opera melodies, and vocal modulations into multi-textured, one-man arrangements. Even though there’s only a trombone it’s very percussive, full sounding, & upbeat. It’s cool to watch and a good jam! (It’s not as bizarre as my description sounds. You’ll know it when you see it.)

This show is accessible but maybe overcompensates for the snobby reputation opera has. The spoken part is sort of lowbrow to an almost-forced degree and vaguely sexist like your older, crazy uncle. It’s tolerable. And there were opera lovers in the audience who clearly liked that Faingersh was playing up the bawdiness of some librettos. Maybe it’s an inside joke? Interestingly, Faingersh identifies w/ the opera heroine roles, not the tenors (in Madama Butterfly, Tosca, La Traviata).

Don't see it if you're a stickler for polished flowing delivery. Not a seasoned story-teller (feels more like a work-in-progress), but he IS entertaining.

He shares stories/anecdotes about orchestra pit & backstage antics @ the Met, while performing bits of HIS interpretations of the operas he played in including Madam Butterfly, Carmen, Aida & La Traviata.

It's not polished, & his delivery is awkward & slow while jumping around from story to story; humorous stuff, albeit sexist & slightly misogynistic. I don't mind an F-bomb anymore than the next guy, but even I thought the mouthing of "F-ing bitch" a few times was superfluous.

Also awkward, he had no clue his shirt was open last Sunday (2nd to last button), exposing his bellybutton & making him look like a belly-dancer all night.

After an entertaining show, we were put-off by him pointing out the empty seats behind us & openly complaining, "I mean, THIS is ridiculous". Quite a deflating bullet-ending.

See it if You are in the mood for a veeeery chill show. If you want to sit back and be lulled by some trombone and body percussion with a loop pedal.

Don't see it if You are looking for a one-man show with a strong thesis and structure. You dislike loop-based music. You dislike slightly misogynistic plays

This punchline was rather emblematic of the entire performance of A Solo From the Pit. Playing on gender stereotypes, getting a decent laugh, and delivered in a sleep-inducing baritone.

Elias Faingersh is a wonderful trombonist. His musical virtuosity though does not carry over into his command of dramaturgy. The show loops, thematically, in the same way that his music does. It is cyclical in nature.

And that brings me to the music itself. While Faingersh's musical talent is undeniable, it does very little to serve the overarching story of the piece.

Faingersh at one point laments modern audiences' inability to stay awake during performances, and says to pass the time devised a version of Carmen that would keep audience members from dozing off. Strange then, that his score for this piece is so oddly hypnotizing, as if daring audience members to fall asleep.

See it if You want to see an opera for dummies tutorial. Helped a lot before I saw Carmen at the met. Also an interesting life story.

Don't see it if You do not like opera made fun of or are a purist.

See it if you enjoy solo shows from the Fringe; you favor small indie shows built on a personal narrative; you're a trombone fan who likes loud music

Don't see it if sexist, misogynistic humor offends you; if you'd prefer a more polished show or higher production values; if you don't care for solo shows

Also Ratings for music, material & delivery:
MUSIC: you'd assume a musician, age 50, who's played in a Lincoln Center orchestra & who's heard some swell subway musicians en route to W. 66th St. would have refined his ear + looping. Yes, he can play trombone but his looping was amateurish thus boring.

MATERIAL: Misogynistic bent to his anecdotes. His humor tends to be sexist. Mouthing "F-ing bitch" a few times is way too "Animal House" & falls flat. The more you know about opera, the less clever his take on it seems.
EX: His take on Tosca being annoyed at Cavaradossi for leaving the seat up when urinating dragged on and on.
Deciding his well-paid opera job & his dream girl Margherita were both "good but not for me," Elias plays his final piece for us. It's a "Madama Butterfly" aria: “Con onor muore” [With honor I die]. Bizarre summation.

DELIVERY: He's awkward. At 60 mins, it moves too slow. After the finale, Elias grabbed a bag to hawk merchandise. Geez.

See it if You like listening to solo trombone music both classic opera and mdoern interpretations.

Don't see it if You are looking to an interesting story into the different/unseen parts of the opera world. Also if you are passioante about opera.

See it if You enjoy people who follow their dreams.

Don't see it if You like strictly classical music.

See it if You love music, one person's story well told intrigues you, you like your comedy with a mix of pathos

Don't see it if You don't like one-man shows, you dislike music, you prefer conventional plot and dialogue

See it if You dislike opera and like unusual, jazz-infused music.

Don't see it if You love opera. The performer almost makes fun of opera.

Also The performer is charming and talented. But beware of attending if you are an opera-lover! Also, it didn't help that the theater let the audience in 30 minutes after the scheduled start time.... Read more Read less

Don't see it if Somebody brought an infant with them who practically was crying the whole time. No it's not O.K. to bother other people with your kids.

See it if ...you want to hear some inspiring music — brass coupled with electronic looping and soulful singing. Also, Elias is very personable.

Don't see it if ...you want a cohesive overall piece. This is too scattershot, though some of the sketches, one in particular, was edgy and hilarious.

Also He's got a beautiful, heartfelt tale of inner struggle to tell, but he hasn't yet brought it to fruition. A stronger director, or just...a director (none was listed anywhere!) could help shape this into something great.... Read more Read less

See it if You like off the wall, clever, funny evening of music and story telling by a charming trombonist/raconteur.

for a previous production “Delightfully entertaining...Faingersh is a virtuoso trombonist...In his very funny one-man show, the musician uses story lines and music from familiar operas...to recall his life, face his fears and explain his choices...The joy of this production is that it introduces you to a new world, it let...
read more
Get Alerts Alerts On Alerts Off
for a previous production “Experiencing a virtuoso trombonist...alone would be worth your Fringe bucks, but Faingersh...adds lively storytelling and musical humor to his one-man show...Faingersh’s musical style is unique...One-man shows can skew overwrought, but the tone is refreshingly light. The ‘follow your dreams’ mes...
read more
Get Alerts Alerts On Alerts Off