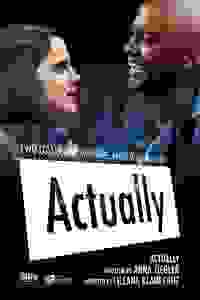 Tom and Amber connect in ways that seem innocent enough at first. But as things progress, they find themselves in murky territory, with ramifications that could affect the rest of their lives. What actually happened between them? And when it comes to relationships, how often is the truth completely objective? Can we ever shed our pre-conceived notions?

Wish I Could See Them All
671 Reviews | 208 Followers
80
Absorbing, Thought-provoking, Edgy, Relevant, Contrived

See it if Indictment of college drinking & hookup culture. Kids with vastly different motivations & expectations get in trouble. Good characters.

Don't see it if You are bothered by unconvincing elements. The legal hearing was a contrivance. Real college students actually(!) study during the week.

See it if insightfully shows how important personal history & context are in adjudicating college rape charges; engaging performances in 2-hander

Don't see it if too much of a "he said she said" vehicle; heavy-handed in demonstrating unfair process; lacks big dramatic moments Read more

"Blain-Cruz’s high-gloss minimalist production makes a great deal of sense moment by moment but cannot seem to accrete meaning and value as the story keeps lurching around...And the actors, called upon to switch gears constantly, have a similar problem maintaining credible characters. Boone keeps enough in reserve to smooth over the role’s inconsistencies, but Socha is stuck making hairpin turns on unmarked roads. To say she doesn’t crash is high praise."
Read more

"Director Blain-Cruz and her two sharp actors infuse this talky piece with energy and urgency, and Ziegler’s meticulously detailed script is more than occasionally funny, despite its serious themes. As Amber and Tom unravel the knotty threads of their fateful interaction on an unadorned stage, our sympathies are repeatedly tested. 'Actually’s' subject is politically charged, but its focus is squarely on the human beings behind the headlines."
Read more

“Ziegler’s taut, devastating new play, directed with a deft, unsparing sense of forward motion...A smart, profoundly painful exploration of the murky, treacherous sexual culture this country is mired in...‘Actually’s’ wit and its intelligence are part of what makes the complex darkness at its center hit so hard. There is brightness in this play, and in these people, and to see its sparks overwhelmed by such fearful and familiar shadows is shattering. In moments, it’s even revelatory.”
Read more

"It's a compelling and provocative subject whose dramatic potential is only fitfully realized in this talky effort, consisting largely of monologues...It's a technique often used by the playwright...But here it feels lazy...It's in the infrequent instances when the characters do interact that ‘Actually’ actually clicks...Despite its stylistic drawbacks...the play feels incisive and smartly observed. As superbly played by Boone and Socha, the characters register as sympathetic figures."
Read more

“Blain-Cruz’s exquisite staging underscores Ziegler’s devotion to a kind of dramatic fair play...Absent stacking of the deck against either Amber or Tom, they emerge as complicated young people determined not to let their ambiguities undermine their conviction about what happened that night. Understanding all that is what gives the terrific actors a dreamlike power in which a gauzy truth gradually and painfully comes into sharp relief.”
Read more

"A gripping portrait of campus rape that frustratingly misses the wood for the trees...Impressively, Ziegler has created what feels like real individuals in Amber and Tom, something that comes across clearly in Socha and Boone's layered performances...Unfortunately, in devoting much of the play's energy to developing nuanced characters, Ziegler glosses over some crucial questions...I didn't leave conflicted, but sad: ‘Actually’ isn't really a reevaluation, but a reminder."
Read more

“Ziegler’s absorbing and thought-provoking new drama...There's a surprising amount of character-driven humor; the kind that deals with the normal anxieties...without ever undercutting the seriousness of the situation...The major strength of Ziegler's storytelling is that she seems less concerned with having viewers take sides than she is with having us feel the mutual tragedy of the situation and be more concerned with discussing how such matters can be prevented.”
Read more

“Ziegler keeps turning the screw, adding details that constantly force us to revise our opinions of the characters...Under the sure directorial hand of Blain-Cruz, neither Boone nor Socha tips the author's hand, presenting each character's argument without fear or favor and leaving us to puzzle out for ourselves the truth...The staging is as lean and swift as the writing."
Read more

“Could very well be the play of the season...A powerful indictment about the way in which appearances, prejudice, and societal constructs like gender and race can take on immeasurable weight when stacked on each other...Ziegler's dialogues are filled with her usual combination of snappy repartee with the sudden phrase that seems to turn the world upside down...The play should elicit some provocative conversations."
Read more

"Ziegler’s play lets us bask in the uncomfortable tale of how these two characters have been set up for this disastrous night...Director Blain-Cruz keeps her staging as minimalist as it gets...The burden of keeping us alert and engaged falls mostly on the actors and the text, which pushes the actors to sometimes overcompensate with a delivery that seems pushed...Ziegler’s nuanced depiction of a potential rapist we hate to hate and an imperfect victim is a brave effort."
Read more

"As for their back stories, Ziegler might have...removed at least one from each of her characters...The play’s dramatic flaws are almost obscured by the deeply felt and thoroughly lived-in performances and the smooth direction of Blain-Cruz...While ‘Actually’ raises some very important questions about how men and women should interact - it’s a testament to everyone involved that it provides no easy answers or snap judgments."
Read more

"Essentially the play is a narrative about two young people from very different backgrounds...Both actors manage to give lively and convincing performances. Director Lileana Blain-Cruz keeps things moving along. She does tend to allow Socha to be quirkily neurotic to excess and to repeat her physical shtick...The dialogue is smart and often quite funny. She has packed it with an overabundance of issues."
Read more

“An engaging think piece that wonders if opposites attract or if opposites attack...Ziegler has her characters presenting their cases directly to the audience, keeping interaction between the two at a minimum...What makes the play tick is that we are never given any conclusive answers. And because of that, ‘Actually’ is a story about overt sexual assault only on the surface. It is more concerned with what shaped Tom and Amber’s perceptions...The production is perfectly paced.”
Read more

"I was struck by its humor and compassion for its two characters...Most of the performance plays like an extended monologue...I found myself alienated by the self-aware telling of the story...The asides and stories were entertaining and illuminating, but they often overlapped in such a way that was jarring and did not ring emotionally tuned...The climax was affecting, mainly because Boone handles Tom’s recognition with staggering range. The final image is stunning, but felt unearned."
Read more

“The play could not be more timely as the flood of sexual-harassment allegations raises a myriad of issues. This sharp and scary two-hander pits what some see as black-and-white into troubling realms of gray. Both sexual and racial overtones arise...Ziegler wisely does not choose sides but endows each character with virtues and flaws. Blain-Cruz manages to maintain tension and intensity through the play’s 90-minute running time despite the limitations of the format.”
Read more

“So ‘Actually’ by Ziegler can’t help but be timely. It could however be better...The play’s manipulation feels grating almost from the start. Every detail that they share feels like a piece of evidence...Blain-Cruz presents the drama as well as can be done with the elements at hand...The ping-ponging back and forth between each character with every new revelation intended to color our opinion of them was so frustrating and false that we stopped believing in them.”
Read more

“While the production sometimes lets the text down, the play’s provoking bitterness keeps us watching...There are many strong moments of writing here...Illustrated with beautifully full, specific, and natural language...There are occasional weaknesses...A too-full ending section, wherein the characters, and the playwright, throw everything against the wall...There are direction issues. Blain-Cruz is unaccountably disengaged...Alexandra Socha employs a mannered façade."
Read more

"An exceptional two-hander...This work is not heavy-handed, melodramatic stuff; instead, it is extraordinarily realistic...It would not be accurate to call this seat-squirming theater, but the very natural performances bid theatergoers to consider, to contemplate...Blain-Cruz gives these actors space to create. The director, fortunate to be working with a sharp script and insightful actors, helps to fuel this 90-minute piece. It's all terrifically absorbing."
Read more

"What emerges over the course of Ziegler’s riveting new drama...is something subtle, a story that extends even beyond the two anguished students at the center...Ultimately Amber moves beyond one-dimensionality as, bit by bit, with consummate skill, Ziegler assembles the intricate jigsaw puzzle of the people Tom and Amber were before they met...The playwright ultimately does not scant the psychological and moral complexity of either of the students."
Read more

"Contemporary plays on hot-button topics tend to be didactic, with an unwavering point of view, but 'Actually' holds fast to its ambiguity...It’s an unusually sensitive and non-doctrinaire piece of work, emotionally detailed and seeded with humor, and Ziegler does a superlative job of finding distinctive voices for the two characters...It’s only with Ziegler’s sketching in the background of Tom’s side to the story that the narrative gears creak somewhat."
Read more

"'Actually' is not a typical he-said-she-said play...The tone throughout is heartfelt and authentic; not given over to melodrama and theatrics but, rather, pain, confusion, anger, and, yes, humor, all of arises naturally as a function of who Amber and Tom are...Ziegler has written an honest, open play whose characters are fully formed; whose points of view, attitudes, and thoughts arise from within, from who they are as dimensional human beings, rather than mouthpieces in a polemical debate."
Read more

"Socha and Boone are skilled actors and perfectly cast...The technical weaknesses of this production are largely mitigated by the riveting performances and Ziegler’s incisive use of language...The lack of genuine academic ambience leaves Ben Stanton’s lighting design to fill us in on the changing times and spaces. I confess that at times I thought I understood what the lighting changes were telling me, and other times I was hopelessly lost."
Read more

"A timely, true-to-life production...Blain-Cruz, Socha and Boone work flawlessly together to set the scenes, with excellent results. Both Socha and Boone were stellar in their roles...The electricity between the two crackled, which made the hearing scenes even more emotional...There are very seldom clear-cut heroes or villains in every story–and empathy lies in understanding that. This show’s power is in its realism, and it will affect everyone lucky enough to see it."
Read more