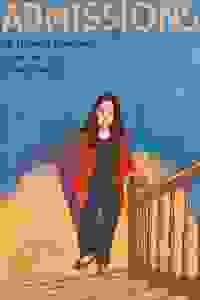 In' Admissions', Sherri Rosen-Mason is head of the admissions department at The Hillcrest School, fighting to diversify the student body. And alongside her husband, the school's Headmaster, they've largely succeeded in bringing a stodgy institution into the twenty-first century. But when their only son sets his sights on an Ivy League university, personal ambition collides with progressive values, with convulsive results.

See it if You like shows about topical controversial subjects. Extraordinary writing! Excellent acting! A real conversation starter!

Don't see it if You’re looking for a fluffy piece of theatre that you won’t have to think about.

72
A piping hot serving of in-your-face white liberal hypocrisy coming right up; but it has its moments

Don't see it if broad liberal self flagellation, cartoonish characters; does not make you rethink premises about affirm action Read more

See it if you enjoy a very intense drama about conflicts liberals face. Diversity is good but what if it affects your child's chance at Yale?

Don't see it if you like comedy without a serious subject. Read more

See it if you are interested in school diversity, mixed messages, parental hypocricy. Jessica Hecht is excellent as mother and head of admissions.

Don't see it if Bizarre that a play about diversity has an all white cast playing to an all white audience. Interesting enough, but needs more depth.

See it if You want to see a very thought-provoking play and an exciting performance by Ben Edelman. Excellent production in every way.

Don't see it if You don't want to think about difficult issues and if you don't like plays that consist of people talking and arguing with each other. Read more

See it if you like plays dealing with diversity and using an all-white cast!! Seems like a lot of the satire is aimed at LCT's audience.

Don't see it if plays about diversity make you uncomfortable.

See it if you like wordy plays that discuss important issues.Focuses upon racism, white privilege.Shows what happens when ideals have personal impact

Don't see it if you don't like "talky" shows.Staging is awkward.There's a lot of overacting. BUT it has an important message and is well worth seeing.

"Despite some flaws common to its genre, 'Admissions' is an extraordinarily useful and excruciating satire — of the left, by the left, for the left — for today...Almost every piece of information supplied at the start pays off by the end...Still, I’m not sure that Daniel Aukin’s warm and intermittently rollicking production finds the right tone...No matter. One of the things the theater should be doing today, and rarely does, is lancing the boil of our own self-deception."
Read more

"Narrowly focused but well-argued issue play...When I saw the play, Charlie’s long, frustrated rant about the unfairness of his situation was greeted with a smattering of ambiguous applause: Were people clapping for Edelman’s ardent performance, or the sharpness of the writing?...The nuanced and competing truths in Harmon’s 90-minute play are like a first act that dares its spectators to create a second out of postshow conversations."
Read more

"The icky irony is that it’s letting the overwhelmingly white audience at 'Admissions' feel like we’re grappling with something difficult, even as we’re being allowed to indulge in some pretty basically racist lines of thought...The skillfulness Hecht and her fellow castmates bring to their roles is part of what makes 'Admissions' hard to pick apart. They’re doing a great job with material that’s simultaneously well written and ideologically wack."
Read more

"A smart, provocative drama with a rich vein of humor that pulls the rug out from under liberal white America, letting nobody off scot-free...Even if 'Admissions' is a little speechy and could use some trimming, it represents a satisfying expansion of the playwright's range after his well-received previous efforts...Director Daniel Aukin and his fine cast confidently steer 'Admissions' through this sticky, at times morally murky territory."
Read more

"Too bad this would-be button-pusher about white privilege, white power and white anxiety is too tightly — conveniently, actually — constructed for its own good. The Lincoln Center production directed by Daniel Aukin strangles itself before your eyes...Through it all, Hecht is fully on her game. Her characterization makes Sherri smart, demanding, prickly, sympathetic, all too human — with the requisite shades of gray. 'Admissions,' meanwhile, is wearyingly monotonous."
Read more

"Hecht gives a recognizably human performance of a woman forced to confront the contradictions between her lifestyle and ideals...Aukin helms an unexpectedly provocative production that masquerades as something far less threatening...'Admissions' daringly asks if our proudly touted accomplishments vis-à-vis 'diversity' are really just a cover for keeping that oppressive system largely intact...It's a question that lands like a gut-punch to the American psyche."
Read more

"Aukin is something of a Harmon specialist, and he orchestrates the debates with plenty of brio, aided by the well-chosen cast. Hecht is hair-raisingly on target...Edelman incarnates adolescent rage in its purest form...Garman delivers his lines from low and outside, expertly underplaying as Bill...Everyone involved has come together to support Harmon's provocative, unsettling argument that achieving the ideal of true diversity may be a lot harder than it initially looks."
Read more

"Insightful and often sharply funny...One of the real strengths of the play is that, while it certainly exaggerates things in order to support its theme, it withholds skewering its central characters with claw-and-fang accusations of hypocrisy...Harmon has shown a flair for staying just this side of unmitigated browbeating social satire...A well-paced, even-handed exploration of white privilege among imperfect liberal allies of social justice causes."
Read more