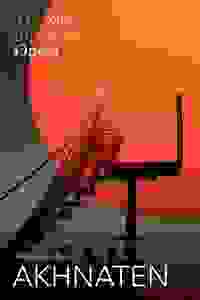 One of Philip Glass’s three large-scale operas based on a “big idea,” in this case monotheism. The work, set during the 17-year reign of Akhnaten, around 1350 B.C.E., deals largely with the unseen forces affecting the inner (psychological), interpersonal (political), and universal (mystical) aspects of existence.

The opera had its world premiere at Staatsoper Opera in Stuttgart, Germany in 1984.

See it if you like an opera where there is very little actual singing and definitely not difficult singing. Great staging and costumes.

Don't see it if you like an opera with arias or music that challenges the operatic voice.

See it if A sight to behold! Beautifully produced, not your classic opera.

Don't see it if If you only enjoy classic operas

See it if Gorgeous staging. Fascinating and mesmerizing. Glass perfection. The voices, the orchestra, the juggling!

See it if Brilliant theater and opera (by Glass). Amazing staging and other worldly music. Important concept of a different thinking leader who is

Don't see it if You dislike Philip Glass (hard to imagine). His work is unlike that of any other contemporary opera composer. It just elevates and shines. Read more

See it if You like Met singing, you enjoy specific directorial choices, you enjoy the history of this period.

Don't see it if You dislike experimental opera, you get easily overwhelmed when a lot is going on, you are looking for a first exposure to opera.

See it if Philip Glass's score is exquisite. The visuals created by the director are stunning. There's lots of awesome juggling!

Don't see it if Don't go if you dislike Glass's music. The story is told in a visual rather than a textual way. Some might find the production slow at times

"McDermott’s production similarly exposes its performers: not only the singers but also a dozen jugglers in catsuits, including Sean Gandini, the show’s choreographer. As scrappy as it is ornate, the staging — with imaginative, thrift-store-find costumes by Kevin Pollard and sets to match by Tom Pye, and artful lighting by Bruno Poet — demands the patience and steadiness of yoga in its movement, as well as an active eye for anyone watching."
Read more

"One of the greatest successes of recent Met seasons is Philip Glass's 'Akhnaten', first seen in 2019. I saw it three times that year and fell under its spell each time.It is being revived this season. The Met production has been seen in other venues and is the current gold-standard for the work."
Read more

"With repeated exposure, the brilliance of this score comes into sharper and more heightened focus, as does the certainty that 'Akhnaten' is one of the great traditional operas, albeit in a 'modern' compositional style. As Monteverdi reflected the musical world of his era, so Glass has done since the late 20th century."
Read more