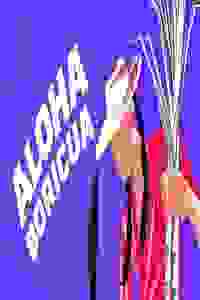 A musical story about the migration of Puerto Ricans to Hawai’i.

Aloha Boricua centers on an early example of strategic population displacement under U.S. colonial rule: After the destruction from Category 4 hurricane San Ciriáco, just one year after military invasion, and lured by the promise of paid work and new beginnings, young Puerto Rican sugarcane workers and their loved one embark on a one-way journey to Hawaii.

Multiple voices collide in this musical story, including those of Hawaiian Queen Lili’uokalani; Pele, Hawaiian Goddess of Fire and Volcanoes; and a younger generation of streetwise artists desperate to make sense of it all.

Performed in English and Spanish with supertitles.

See it if you enjoy song cycles; you appreciate shows that illuminate lesser-known histories; you want a high-energy show in an intimate setting

Don't see it if you're bothered by lyrics that are hard to hear/understand at times due to the volume of the music; you want a more substantial, linear plot Read more

See it if Your into anything musical theatre, or have a soft spot for Puerto Rican music. Also if you are interested in learning a little history

Don't see it if You’re not into a show full of upbeat and repetitive songs, or don’t like shows in interchanging languages, with surtitles

Don't see it if You don’t like historical stories