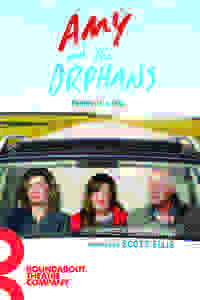 Amy and the Orphans

After their father’s death, two unhinged siblings reunite with Amy, their movie-loving sister who has Down syndrome. Hop in, buckle up, and hold on for dear life in this raucous family road trip. More…

Together, they careen down the Great American Long Island Expressway, navigating strip malls, traffic jams and some serious (and not-so-serious) family drama. An unexpected turn reveals the moment that changed their lives…and the fact that Amy may be the only one who knows her own mind. Written by Lindsey Ferrentino, who made her New York debut at Roundabout with the world premiere of 'Ugly Lies the Bone,' and directed by Scott Ellis ('The Elephant Man,' 'She Loves Me'), 'Amy and the Orphans' is a rollicking ride that proves it’s never too late to follow a new road.

See it if you have a loved one associated with the production & have to see it to keep peace with them.

Don't see it if you like your live theater to feel alive, not like a TV retread.

Also This play ends with its most (& only) thrilling moments. Jamie Brewer, who has played Amy, an adult woman with Down syndrome, steps to the front of the stage as a curtain falls behind her so she can address the audience in a de facto soliloquy. The kicker is that every line she speaks is famous because of a Hollywood movie, appropriate because Amy's most sustained passion in life has been movies. The speech is clear-eyed, heartfelt, purposeful. Nothing else in the script so far has been. Every laugh has felt canned, & all of the personal details we have heard from the other 3 characters who are taking a long, long road trip with Amy (her 60-ish brother & sister & an attendant from Amy's home) have not meant a thing to us because those characters are so unpalatable. I kept wishing for a flashback with mom & dad instead. Though they consigned Amy to a notoriously abusive home shortly after her birth, at least they had identifiably human hearts and failings.... Read more Read less

See it if follow 3 adult children suddenly orphaned & their relationship with their sister who has Down Syndrome, & discover secrets held from them

Also The actress playing the daughter with Down's Syndrome actually has Down's Syndrome IRL and she is absolutely endearing and transfixing.She contributes so much to the play.... Read more Read less

See it if You want a well-written, realistic family drama that goes beyond the cliches. You want a look at the treatment of people w/Downs Syndrome.

Don't see it if You dislike family dramas. You prefer a 100% comedy or drama.

See it if you're interested in family based true stories and how parental decisions can affect their children; serious topics served up with humor.

Don't see it if you're looking for fantasy. This is important subject matter and I feel the book falls short. Sometimes too much humor is a distraction.

See it if You want to see a play that deals with people that have special needs and how their families and other individuals treat them.

Also I think the subject of this play was incredible. But I have major issues with the script. I think it was very safely done. Most of the jokes were stale and cheap. When the play with over the curtain call was all about the actor who had special needs. This was very much an ensemble cast. The Point of the play was about treating people as equals but they made the entire curtain call all about the actor with special needs. It was like no one else even got a bow it was all about him. I think that went against everything this play was about. He should have been able to stand there with his fellow actors and actresses and all take a bow together like an ensemble curtain call normally goes... Read more Read less

See it if You like contemporary plays about a family dealing with the issue of a Down Syndrome sibling after a parent’s death. Lots of challenges

Don't see it if Mental illness topics upset you. You have no compassion. Recent family death upset you.

Also The Down Syndrome part is played by an actor with that mental challenge. She steals every scene. Alternate performances are played by a male actor.
The cast is very cohesive and the situations also showcase the 1970’s abuse at mental institutions, after parents made the difficult decision to send a needs child to a group setting.
... Read more Read less

See it if you want to see the latest work of a fine young playwright who combines comedy and pathos skillfully.

Don't see it if you like your comedy straight without serious overtones.

See it if If you are interested in a sensitively executed play about sensitive subjects.

Don't see it if See it! It will make you a better person.

See it if A family drama with a Down Syndrome twist interests you. It also reminds us how shamefully we used to and often still treat the disabled.

Don't see it if Wed and Sat matinees unless you want to see Andy instead of Amy. You can’t accept disabled actors.

See it if you want a show that explores the effect of abandoning disabled children into "the" system.The impact on the family and child is irreparable

Don't see it if you want a tight, coherent story.A plot device is clever but weakens the impact of the play. Acting is uniformly excellent.

See it if A delightful play focusing on the abilities of a Down syndrome individual. Nicely developed family interactions adds depth and humanity.

Don't see it if Do not see if you perfer musicals or are sensitive about handicapped individuals.

See it if family dramas are your thing, especially if you have a handicapped person in your life. The humor was a bit repetitive, a la TV sitcoms.

Don't see it if family dramas are upsetting, or if a handicapped person on stage would be unsettling. I found it interesting; my companion was in tears.

See it if Guilt-ridden siblings on a road trip w/their Down syndrome sister & her nurse after their fathers death. Told with warmth & lots of humor.

Don't see it if Addresses issues of institutionalization & guilt. I found the Willowbrook reveal hard to believe; how little anyone knew about their sister

Also It was wonderful to see an actress with Down syndrome playing the sister. Fine performances all around.... Read more Read less

See it if you are longing to see Debra Monk back on the stage.

Don't see it if if a play about a feisty down syndrome character who is smarter than her two non-down syndrome siblings doesn’t sound interesting.

Also I was great to see actress Debra Mon’s return to the stage. I just wish that her return to the theater would have been in a play where she could have really shown off her acting chops. This play came off like a BAD modernized “I Love Lucy” show with actors Debra Monk and Mark Blum placed in the roles of Lucy and Ethel. In this bad “I Love Lucy”esque play, the actress getting all the laughs was Vanessa Aspillaga in the role of Kathy. Her introduction monologue in the play was truly LAUGH OUT LOUD FUNNY. Unfortunately the play itself was more of a drama than a comedy. I was specifically uncomfortable when I realized that the actress portraying the down syndrome character actually was a person with down syndrome. What even happened to “ACTING” a specific characters foibles. I was grateful that this production was only ninety minutes long as I would not have been able to bear even one money minute more of it.... Read more Read less

See it if A play centered around a person with Downs Syndrome is of interest to you.The play explored family and related societal attitudes Great cast

Don't see it if You aren't interested in learning more about people with Downs Syndrome.The play explores how a higher functioning person lives and relates.

See it if Count on the Laura Pels to bring exciting new work to NYC. I have experience working with mentally challenged population, but I learned

See it if you want to see a good example of inclusion in the arts. The acting is great and the script is pretty solid.

Don't see it if you don't enjoy dysfunctional family humor and some larger than life, sometime overly exaggerated characters.

Also At times, I didn't know where the story was going, but it all came together in the end in a very profound and clever way.... Read more Read less

See it if you're a big Debra Monk fan

Don't see it if you don't like plays or want characters to make sense.

Don't see it if You are not interested in stories based on fact that have to do with the disabled.

See it if You like shows that explore how we value life. This play explores the hard decisions people make and does so with understanding.

See it if you want to see a play serving underrepresented characters and experiences, even if it's in a "message" play.

Don't see it if you want that play to feel finished, with well-written characters and strong motivations.

See it if you enjoy plays that give you fresh insight into something you knew little or nothing about (in this case Down Syndrome) and are funny too.

Don't see it if you are turned off by the subject or, in general, you don't like plays that explore a "problem" issue.

Also Do get the hearing assist device!

See it if Wonderful performance by the actress with Down’s syndrome. Tackles difficult topic of family choices and their dire consequences.

Don't see it if You can’t handle family coping with recent death and with not being supportive enough of family member with a disability. There is humor tho

Also I especially appreciated the history of willow brook as a New Yorker and am still haunted by that era of brutal institutionalization. Amy is such a resilient character.... Read more Read less 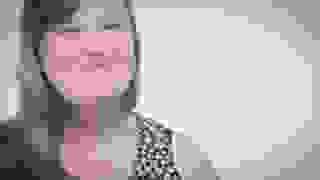 The 33-year-old actress thought to be the first lead in an off-Broadway production to have Down syndrome. Her list of credits includes a recurring role on the hit TV show "American Horror Story." But perhaps her most challenging role yet is live on stage in "Amy and the Orphans." 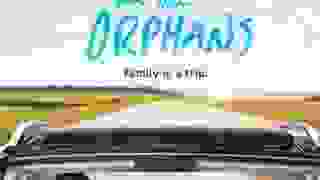 How 'Amy and the Orphans' Is Making Theater More Inclusive

Jamie Brewer is making history as the first actor with Down syndrome to star Off-Broadway. But it takes an agent with a vision of inclusion to represent actors with disabilities making change onstage. 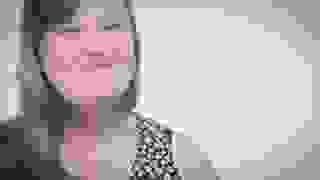 The 33-year-old actress is starring in Lindsey Ferrentino's 'Amy and the Orphan.' 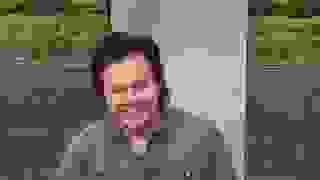 Josh McDermitt stops by to chat about Amy and The Orphans, his theater debut, & more! 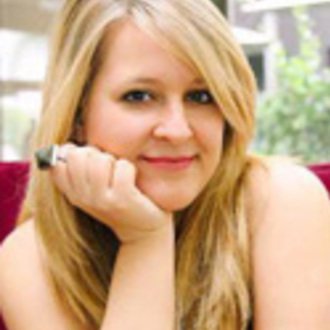 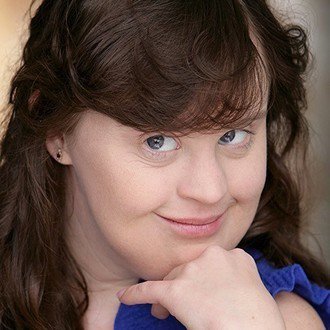 Jamie Brewer
Amy
Get Alerts Alerts On Alerts Off 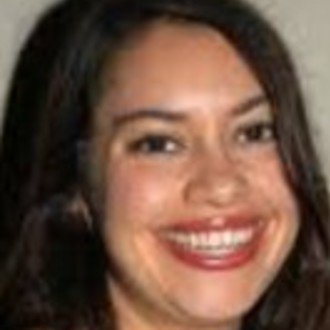 Vanessa Aspillaga
Kathy
Get Alerts Alerts On Alerts Off 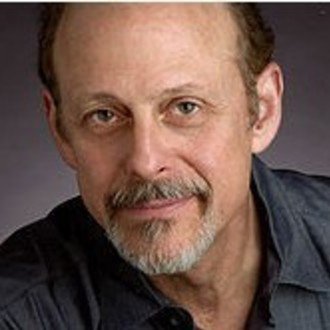 Mark Blum
Jacob
Get Alerts Alerts On Alerts Off 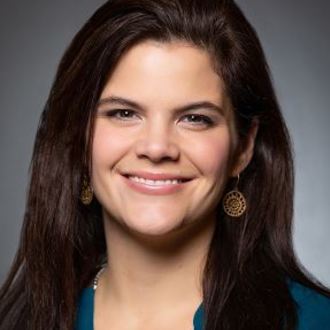 Diane Davis
Sarah
Get Alerts Alerts On Alerts Off