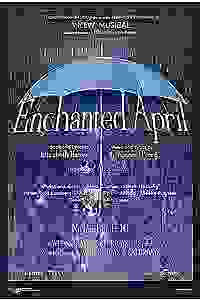 A new musical based on the celebrated 1922 novel about four London women who spend a transformative month in an Italian villa.

An Enchanted April begins in London...during a particularly dreary February in 1922. Four world-weary women, desperate to escape their memories of WWI and the repression of London, dare to rent a villa in Italy for a month. Miraculously, in just one short Enchanted April, the lives and hearts of these women are transformed by wisteria, sunshine, a small medieval castle...and each other.

See it if you love all musicals. EA needs work, but has some charm. Well staged in tiny space. Pleasant music; impressive musicians. Clever book.

See it if A wonderful old fashioned musical. Acing is very good with wonderful songs.

Don't see it if A bit long. If you dont like old fashion musicals.

See it if you know and love this story - there are a couple good songs and some good acting voices with good use of projections on a small stage.

Don't see it if you want a musical that has variety of songs or voices that you can always hear whether spoken or sung. Piano/synthesizer insufficient.

See it if if you enjoy sweet musicals with lovely songs sung by people with excellent voices offering interesting underlying themes.

Don't see it if allusions to the aftermath of war will distress you. Or if you prefer your musicals fluffy.

See it if you'd like to see a charming, urbane, unfussy adaptation of the very British 1922 novel about suppressed yearnings & unlikely friendships.

Don't see it if you're looking for a flashy, modern musical with high production values and contemporary sensibilities. Read more

See it if Nice talent, Not a weak link in the cast. Males match the female counterparts. Nice remake of the book and film Rating a compromise of two

Don't see it if Can be cut 30 minutes. Appealing for older generation Front row cramped

70
Way to long 2hrs 40mins, To much singing, Slow, Disappointing

See it if Four Women going to Italy (trying to ran away) from their problems for a while.

Don't see it if A different time, touch of the past. Slow moving. Read more

See it if you like a story about married women's lives and interaction when they meet in an Italian palazzo. Good lyrics and good acting.

Don't see it if are annoyed by women who have no lives outside marriage. The set is very simple but the umbrellas made no sense in Italy. Read more

"The musical is by no means perfect, and hopefully the creators will continue to refine the material. Still, 'An Enchanted April' is a genial respite from New York's typically cold and damp November."
Read more