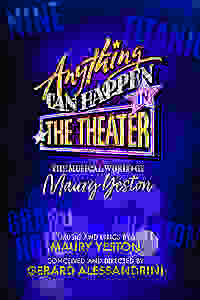 View in admin
Anything Can Happen in the Theater: The Songs of Maury Yeston
NYC: Midtown E
81
Score it Scored!

Anything Can Happen in the Theater: The Songs of Maury Yeston NYC Reviews and Tickets

Gerard Alessandrini, the creator of "Forbidden Broadway," comes to The York with his newest creation: a collection of the songs of Tony-winning composer and lyricist Maury Yeston.

Gerard Alessandrini, the famed creator of Forbidden Broadway (the longest-running revue in Off-Broadway history) and the smash spoof Spamilton, comes to The York with his newest creation: Anything Can Happen in the Theater: The Songs of Maury Yeston, a collection of the songs of Tony-winning composer and lyricist Maury Yeston. The genius of Yeston's songs -- intricate yet emotional, cerebral yet romantic, clever yet unendingly melodic -- is coupled with an outstanding cast (to be announced soon!) for an unforgettable evening showcasing the myriad sides of the writer's repertoire. Showstoppers from Nine, Grand Hotel, Titanic, Phantom, and Death Takes a Holiday intertwine with lesser-known entries from the Yeston songbook to show off his immense breadth of style--from the hilarious to the deeply moving.

See it if The songs of Yeston done very well. Great singing and pleasant show.

Don't see it if If you do not like revue type shows.

See it if you want to see a hard-working pianist in a musical review with 5 good voices, cute choreography, comical moments & effective costumes.

Don't see it if you want a play or a one-themed musical as songs are varied. Sound was off at times, mostly at beginning when mics were off or too low.

Don't see it if You want storytelling. This was a nice collection of songs from old musicals.

See it if ur a fan of (or want to discover) Yeston's music & want a charming, enjoyable retrospective interpreted by 5 talented singers & a pianist.

Don't see it if you hate the musical Nine; you're not in the mood for a revue/cabaret; you're looking for a plot, through-line or a message. Read more

See it if You want to hear good music (piano only) with good singing. Not a long show, but a good show.

Don't see it if you want musical with story line.

See it if You like revues. You like pleasant singers performing pleasant songs. You want a retrospective + some unheard songs of Maury Yeston.

Don't see it if You want a storyline. You want a revue w/equally good songs: some gr8, some meh: annoying since better shows got fewer songs than earlier... Read more

See it if An evening of great singing and talented performers.

See it if like well written entertaining songs, not a lot of depth in most of them. good to hear an oft overlooked composer. performed well.

Don't see it if don't like reviews, then skip this. just a nice bunch of songs.

"The cast is all overmiked, by sound designer Julian Evans, but the excess of decibels is less annoying than usual, because the lyrics are so clear and everyone sounds so good. It's mostly solos and duets, but the ensemble harmonies are truly gorgeous."
Read more

Score: 85% "It's a pleasure to listen to unpretentious tuneful melodies sung by talented performers. Some of Maury Yeston's songs have worn better than others over time, but nonetheless Anything Can Happen in the Theater offers us a welcome respite from the daily grind."
Read more

"Awesomely engaging overview of the best of Maury Yeston, who wrote both the thoroughly delightful music and the unusually witty, touching, or poetic—as the case may be—lyrics of one song after the other…The ensemble…grabs you with its charisma, intelligence, and vocal expertise."
Read more