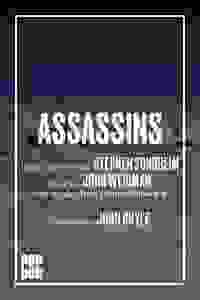 This award-winning musical tells the stories of our country’s most successful and would-be assassins. From John Wilkes Booth to Lee Harvey Oswald and beyond, the show explores the lives of nine men and women who either killed (or tried to kill) one of the Presidents of the United States. The star-studded production completes the trilogy of Sondheim/Weidman musicals Artistic Director John Doyle has helmed. The cast includes Adam Chanler-Berat, Tavi Gevinson, Andy Grotelueschen, Judy Kuhn, Steven Pasquale, Ethan Slater, Will Swenson, Wesley Taylor, and more.

See it if The assainations and attempts of US presidents. Good singing with some good songs.

Don't see it if You want a constant show throughout. Gets boring... people sleeping and some walkouts

See it if nails the dark comedic possibilities of each scene/thin line between comedy and delusion; uniformly fine cast

See it if you love everything Sondheim as I do; u want an intro into a dark piece of our country's history; great acting and singing; engaging.

Don't see it if may hit too close to home for the times we live in; sparse staging w/a good but small 3 piece band; disturbing personalities and topic. Read more

70
Very well done on all levels.

See it if You love Sondheim and don’t mind a musical glorifying sick people.

Don't see it if You want a feel good musical.

See it if you have even half a brain.This is a brilliant production of one of my favorite Sondheim shows.Performances are mind blowingly good.

Don't see it if your idea of a good musical is MJ or Sponge Bob.If you like Sondheim and appreciate creative theatre, see this.

See it if Small-scale intimate Sondheim musical. Great singing with a small band over the stage. I liked Ethan Slater as the Balladeer and Lee Oswald

Don't see it if you don't care for John Doyle's stripped-down staging of Sondheim. But it's totally appropriate for this cozy venue.

See it if Despite the dark topic you are open to an entertaining & engrossing musical - easy to move to Everybody's got the Right, A great ensemble.

See it if well sung play with music. Story is relevant still today about disenfranchised people and their response.

Don't see it if want a big musical. this is small - more of a play with music. some scenes are long.

"I can’t be the only Sondheim nerd sick of respectful, minimalist approaches. Give us full orchestras, monumental design, directors eager to wrestle with convention; scale up, you cowards. Don’t relegate the full sonic and dramatic force of the past century’s greatest musicals to the concert hall or opera house. Or if you’re going to do it in a small venue like CSC, freak the hell out of us. No, those who long for an Assassins to disrupt our peace will have to wait until the next civic atrocity. Take discomfort in the fact that this ominous triumph will always wait for us in the dark, finger on the trigger."
Read more

While the actors give excellent performances, the revival lacks emotion and heart which is strange considering the number of characters who die or who are wounded in the course of the show. It is as though they (and we) are numbed by so much depiction of killing.
Read more

"Assassins is a particular piece. There is only one prop common to all of the characters: a gun. It is their strength, their sword, their sword arm for that matter. Because they welcome it, and everything for which is stands, they can and will murder – or at least try. But murder, in this case is not a blip on the monitor."
Read more

"The production lacks the power to unsettle despite a fine cast of killers and wannabes who changed, or at least made, history gunning for presidents."
Read more

"Assassins remains fascinating...The most discomfiting thing about watching Assassins now is the extent to which the isolated mindsets whose dots the musical connects through 120 years of U.S. history have cohered into movements since the show was written. “The country is not what it was,” sings Booth somberly, and many people now would agree. The other national anthem, as the song predicts, is getting louder every year."
Read more

"Director John Doyle’s electrifying staging of “Assassins,” Stephen Sondheim’s macabre masterpiece about our national infatuation with fame and our appetite for violence, is a revival to die for — figuratively, of course."
Read more

"Are the protesters who violently stormed the Capitol on Jan. 6 the contemporary descendants of the men and women who assassinated and attempted to assassinate the Presidents of the United States? This is the disturbing query posed at the end of Classic Stage Company’s eagerly-anticipated Off-Broadway revival of Stephen Sondheim and John Weidman’s one-of-a-kind 1990 musical “Assassins,” a nonlinear, critical-minded, and darkly comic examination of American assassins and would-be assassins."
Read more

"The theater suffers from serious sound balance issues, with the music occasionally drowning out the lyrics (a grave matter in any musical, but especially in wordy Sondheim). Doyle's staging also exudes a frustrating inertia that shouldn't exist in a musical so tightly written. Some of that derives from spatial awkwardness, as the actors move from one boxy formation to another, like trainees in a marching band. This may be meant to convey the stifling, militaristic conformity of American society, but it only convinced me that Doyle needs to meet a good choreographer."
Read more