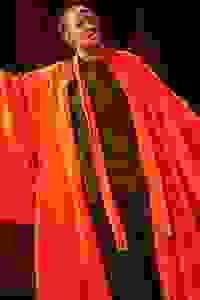 BAM presents the U.S. premiere of Peter Brook's adaptation of the Sanskrit epic 'The Mahabharata,' about a King's struggle to rule in a post-civil war society. Part of BAM's 2016 Next Wave Festival.

Thirty years after his legendary sunset-to-sunrise production of 'The Mahabharata' consecrated the BAM Harvey stage, legendary director Peter Brook returns with 'Battlefield,' a distillation of the central story in the ancient Sanskrit poem. In the wake of an apocalyptic civil war, a remorseful King Yudishtira—his hands still bloodied from the carnage—desperately seeks some just way to rule over murderers and victims alike. Silk scarves become rivers and shrouds; four actors are reincarnated as worms and eagles, victims, and perpetrators; and a single instrumentalist scores the bleak peace of oblivion, giving haunting new life to this staggering Indian epic.

See it if You're Brook fan, never seen the original, like to explore huge moral issues via an Indian folktale with a few stunning stage images

Don't see it if You expect an action-packed look at aftermath of a cataclysmic war or extensive use of Indian theatre techniques. Don't like dry allegories

See it if you want to see a production by the legendary Peter Brook. While I enjoyed the first half, the second half kind of lost its focus.

Don't see it if you are easily bored by the occasional long, droning speech. This work is still so relevant to today–I'd give it a chance.

See it if for an exploration by a theatrical genius of conflict and its effects on humans. Brook is a rare bird and deserves his devoted audience.

Don't see it if you don't like any philosophy onstage, or want a lot of action or elaborate sets/costumes. This is a quiet but moving and gorgeous piece.

See it if you would like to sample in miniature a legendary production with astonishingly graceful acting and staging.

Don't see it if you believe an epic should have a big cast, a lengthy running time, and a large and hyperactive staging.

See it if You want a mesmerizing, breathtaking, borderline religious experience.

Don't see it if you need flashy staging, flashy costumes, and don't want to sit still and join in communion with the actors. Read more

See it if I started Ushering at BAM so was excited to see this, unfortunately I worked it twice and was bored both times

Don't see it if Want an entertaining evening of theater

See it if Sorry Battlefield had such a short run.

Don't see it if Sorry, it is over.

See it if you are interested in watching four actors transform and tell an expansive epic story using simply sticks, scarves and their instruments.

Don't see it if you love big spectacle shows.

"An elegiac play of stark and uncommon beauty…Any sense that its scenes, with their homiletic wisdom, are ripe for parody is forestalled by the acting. It is a style of eloquent economy, which embraces wit as well as solemnity...In recent years, Mr. Brook has been moving toward a distillation of spectacle into simplicity. Still, there remains a sort of wondrous spectacle in 'Battlefield."
Read more

"Brook and Estienne clearly find profound, present meaning in this tale of Pyrrhic victory. But the didactic, story-time quality of the production dims the ancient source's radiance...Brook and Estienne preside over something graceful, all elements smiling meaningfully, the gurus delivering wisdom. Yet 'Battlefield' seems to want to impart lessons without really listening to their implications. I love Brook...But against such willful simplicity, even a worshipper at his altar must take up arms."
Read more

"The questions raised by the story are eternal. All are stripped down to their plainest form and enacted with passion and nimbleness by the superb cast of four...The production’s deliberate limitation of expressive tricks created emotions so inverse-proportionally large that they could only be released in tears. I cried...Luckily we have Brook back among us to demonstrate once again that contemporary theater can and should be talking to 'a large mainstream audience,' not just to itself."
Read more

"There's a great amount of reflection, but precious little action in this sleepy adaptation of the legendary theatrical event...The actors all speak in a uniformly halting and deliberate tone, seemingly meant to emphasize the fact that the story they're telling is very important...With its mystical seriousness and fetishization of ancient eastern wisdom, there is something very deadly about 'Battlefield,' a show that seems to be riding on the reputation of glories past."
Read more

"The minimalist production exudes a meditative mood and audience members might well draw parallels between the ancient text and our modern world. At its best, 'Battlefield' is elegantly played by a fine company, but the slow solemnity of the proceedings can be a bit taxing. Still, there's an appeal to the piece that comes from connecting contemporary views with two worlds; one of centuries ago and one of just a few decades past."
Read more

"Brook and his collaborator, Marie-Hélène Estienne, have distilled the show into a hushed, seventy-minute ritual of storytelling and theatre allegory–one that resonates profoundly in our own war-torn times...The miracle of Peter Brook’s storytelling lies in its exquisite economy and simplicity...Employing myth, ritual and symbol–the three essential classical ingredients of theatre–Brook and his collaborators tell a story for our times."
Read more

"Brooks’ signature empty space of an exquisitely lit, unadorned stage is the setting for diamond-sharp performances that are cadenced like a sutra chant...The precision and harmony of the five performers are exemplary and perfectly matched to the gravity and timelessness of the 'Mahabharata’s' themes...'Battlefield' may tell of a horrific conflict and chastise the vanity of mankind, but we emerge feeling as though we have glimpsed dharma."
Read more

"It would be wonderful to report that the pain dramatized in 'Battlefield' is outdated. Unfortunately, the anguish over what we are asked to feel in this production leaps across the years. It also makes for a very special theater experience...'Battlefield' becomes consistently mesmerizing, enveloping the audience in a total experience with a flow of talk and movement of great smoothness...Yet another feather in the cap of the renowned Peter Brook, now 91 years old and still making his mark."
Read more