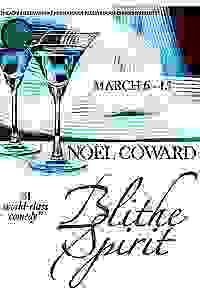 The Theatre Fellowship of Fifth Avenue Presbyterian Church presents a revival of Noël Coward’s 1941 comedy about a séance gone wrong.

Blithe Spirit centers on a séance hosted by a novelist and attended by his second wife. When wife #1, now deceased, also shows up, the fun begins.

The play debuted in London’s West End and played for 1,997 performances. Its initial Broadway run continued for 657 performances. Coward adapted the play for a 1945 film starring Rex Harrison, and directed a Broadway musical adaptation, High Spirits, in 1964. The play has been adapted for radio and television and last played on Broadway in 2009. Another film version, starting Judi Dench and Dan Stevens, will be in production soon.