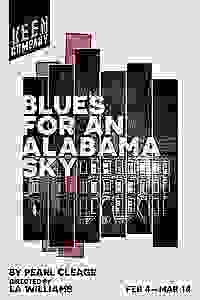 Blues for An Alabama Sky NYC Reviews and Tickets

Keen Company presents a revival of this drama set in 1930s New York, where four friends' lives and passions collide when an innocent newcomer arrives from Alabama.

Tough times call for strong bonds. It’s the summer of 1930 and the promises of the Harlem Renaissance are giving way to the dashed dreams of the Great Depression. Playwright Pearl Cleage (Flyin’ West and Oprah Book Club selection What Looks Like Crazy on an Ordinary Day) tells a strikingly modern story about four friends whose lives and passions collide when an innocent newcomer from Alabama arrives in New York. Having captivating audiences around the world, Keen is proud to bring Blues for An Alabama Sky to New York for the first time since its premiere in Atlanta 25 years ago. Starring Prema Cruz, Alfie Fuller, John-Andrew Morrison, Khira Walker, and Sheldon Woodley.

See it if Heavy issues but thought provoking and well acted. A tad long, but engaging.

Don't see it if You prefer light and fluffy.

Don't see it if You aren't up for a 2 1/2 hour old-style period piece with a lot of attention to characters & setting. You want a realistic conclusion. Read more

See it if You enjoy plays about the African-American experience & Harlem Renaissance, stories about racism & homophobia, evocative acting

Don't see it if Not interested in the African-American experience of the 30’s, want a comedy and not a tragic tale, don’t like themes of racism, homophobia

See it if So so good. So much to think about. All 5 performers superb. Perfect theater for this intimate work

Don't see it if Sorry no negatives for us.

See it if you want to see an old-fashioned play that is timely. This play is very well constructed. Great introduction to the writing of Pearl Cleage.

See it if you have nothing else to do.I found the first act interminable.Acting was ok, but no one really inhabited their roles.Story was ok, but....

Don't see it if you don't know someone in the cast.It should have had something to say about race in America. It didn't hit that note for me.

See it if You enjoy well acted shows by talented performers about a by-gone era that is still relevant today.

Don't see it if You don't like long first acts that do a lot of set up. You want a comedy.

See it if great writing. contemporary yet had the feeling one was seeing a classic play. well acted and directed. hope this becomes a staple

Don't see it if want a big sweeping play. this is more intimate focusing on few characaters.

"Review: Name-Dropping Harlem in ‘Blues for an Alabama Sky’: The neighborhood is referrred to constantly, insistently, but doesn’t come to life in Pearl Cleage’s play about a nightclub singer from the 1930s."
Read more

"Men to Watch in 'Cambodian Rock Band', 'Blues for an Alabama Sky,' and 'The Headlands'"
Read more

"Its account of characters caught up in rapidly changing times and shifting social mores remains highly pertinent. It is as engrossing as a good novel, offering a trip to another time while commenting on issues that remain vital today."
Read more

"Set as the Harlem Renaissance was turning into the Great Depression among artists and professionals alike, Cleage's conventional melodrama is old-fashioned in structure, but the characters are three-dimensionally drawn and the plot is engrossing."
Read more