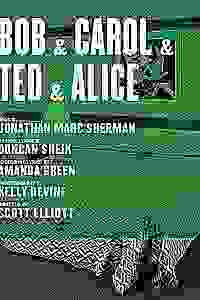 Based on the 1969 film, this new musical for The New Group offers a bittersweet comic take on the sexual revolution.

A bittersweet comic take on the sexual revolution in which the suavely conventional lives of two successful young couples, all friends, are both stirred and shaken when they open their minds to the changing attitudes around them. Jonathan Marc Sherman (Book), Duncan Sheik (Music, Lyrics) and Amanda Green (Lyrics) evoke both the confusions of the time, and the hard timeless lessons of marriage and emotional commitment, inspired by the brilliant and irreverent Oscar-nominated film. Scott Elliott directs this world premiere musical of Bob & Carol & Ted & Alice featuring choreography by Kelly Devine.

Based on the Columbia Pictures motion picture directed by Paul Mazursky and written by Mazursky and Larry Tucker.

See it if It's entertaining and has a nice flow and story.

Don't see it if Unfortunately the music (not really a musical) is very distracting/detracting from what could have been a deeper more painful exploration.

See it if You're a fan of any of the cast members, they are all talented. The story is fairly entertaining but songs derail momentum.

Don't see it if I enjoyed the story but found the music unnecessary. Would have enjoyed it more if it were a comedy w/ no songs.

See it if You want to see a show that looks and sounds stylistically like it stepped out of the 60’s. Perfect snapshot of the swinging times/people.

Don't see it if You don’t like shows that step a outside the box as far as traditional storytelling. This is more like a play with music than a musical. Read more

See it if If you liked the movie. Very good acting and directing. Show had good flow too it.

Don't see it if Music was not necessary was very disruptive in this show.

See it if ur a Shiek or Green completist [prepare for a letdown], a New Group sub [u already know disappointment] or a Vega fan [still sounds great].

Don't see it if to avoid a tiresome, outdated, awkward, tedious, sexless remake of the 60's film that should be renamed "Rhyming Dictionary: The Musical". Read more

See it if curious how film transforms into a musical, fan of Duncan Sheik's music, want to see Suzanne Vega sing and perform, fan of 1-act musicals

2/5 Stars "Like an evening of awkward sex, this stilted show isn’t nearly as stimulating as it promises to be...Scenes that are dryly humorous in the movie fall flat under Scott Elliott’s tonally murky direction...Only in the show’s final 20 minutes do you get a sense of what might have been."
Read more

"The book scenes play like leftovers from a 1960s Broadway sex comedy -- and not one of the better ones -- frequently interrupted by random songs seemingly transmitted from a radio mysteriously connected to the Summer of Love."
Read more

"The distancing effect of the music tends to dilute the book's satirical aim...The show does not have the lacerating precision of a play like Donald Margulies' 'Dinner with Friends,' for example. It is a pity because there are so many good things about 'Bob & Carol & Ted & Alice.'"
Read more