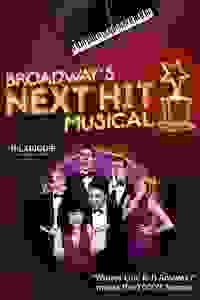 "Broadway's Next Hit Musical" is an improvised theatrical awards show (think "Whose Line Is It Anyway?" meets The Tony Awards). More…

Master improvisers gather made up, hit song suggestions from the audience and create a spontaneous evening of music, humor, and laughter. The audience votes for its favorite song and watches as the cast turns it into a full-blown improvised musical - complete with memorable characters, witty dialogue, and plot twists galore.

See it if You want a thoroughly enjoyable evening of silly improv about The Tony’s. If you’re a theatre fan even better but it’s not necessary.

Don't see it if If you hate that TV show Who’s Line Is It Anyway. It feels a bit like that with a theatre theme.

Also I’m generally not a fan of improv so I went into this with GREAT reservations. Wow was I pleasantly surprised. Five super talented actors plus piano made for great fun. At intermission I’d had enough...almost left...felt sure they were making a mistake by having a second act. Once again I was proven wrong. Second (shorter) act was just as funny and fun and made for a full well rounded show rather than a short throw away. Well worth your time!... Read more Read less

Wish I Could See Them All
Syosset
50-64 | Male
671 reviews
Get Alerts Alerts On Alerts Off
85
Quirky, Masterful, Hilarious, Entertaining, Delightful
June 20th, 2019

Don't see it if You want a rehearsed, well-refined show with perfect vocals (though these vocals are darned good for improv). You don’t like silly stuff.

Also I have to see this again. The winning song (of four) in this evening’s show was “I, me, and my compost” from the supposed musical “Mecycled”. The cow character was hilarious! The piano music accompaniment is also improvised.... Read more Read less

See it if You like musical improv. You're in the mood for a very silly spoof of awards shows. You enjoy audience participation.

Don't see it if You dislike improv. You prefer shorter improv: while Act 1 was well-done, Act 2 was unnecessary & slowed down the good momentum of the show.

See it if You are looking for a light and easy night of music and theater. Fun, funny, ridiculous, family friends and great. Amazing actors.

Don't see it if You are expecting brilliance at every turn. It is improvised and will definitely depend on some luck whether it's a good night or not.

See it if You enjoy spontaneity in a musical and a lot of audience participation (voluntary).

Don't see it if If you’re looking for something with substance and you don’t want to walk out wondering why the audience was laughing.

Don't see it if Think you could do better, can't enjoy other performers hard work & talent, or that which doesn't operate at 100% success rate, hate inprov

See it if you like improv,both comic & musical; cast has to create a song & scenario from audience suggestions, on the spot.

Don't see it if 2nd act where they create a 1 act play of the most popular scene from act 1, wears a little thin. Still, some very funny moments.

Also The emcee ( Greg Triggs, at the performance I saw) is hilarious when he critiques each attempt. Pianist is terrific.... Read more Read less

Don't see it if If you like high production value in a show or if you expect a traditional comedy.

Don't see it if you prefer spacious, comfortable theatres, fully developed and scripted drama, comedy, or musicals with large casts and formal sets/costumes

See it if Very entertaining improvisation and creative actors.

Don't see it if If you don’t like improvisational plots.

See it if you like improv and are willing to take a chance Talented cast and pianist. Some skits worked better than others. Silly fun.

Don't see it if you are not a fan of improv. If it will bother you when some moments fall flat.Not as good as Freestyle Love Supreme--they set a high bar.

See it if You like really good improv. This is a very talented cast

Don't see it if If you prefer dramas

See it if you enjoy clever, funny impromptu musicals.

Don't see it if you don't like silly, humorous shows; expect a serious talent/award show

Also The show was made up of a group of very talented, creative actors who could improvise instantaneous skits from short, silly titles prepared by audience members. All were great ad libbers.... Read more Read less

See it if you love improve and musicals! A sharp cast and brilliant pianist make audience suggestions into hilarious showtunes.

Don't see it if if you hate improv or low RENT shows. It's billed as 90 mins but ran 2 hrs. The best improv knows when to stop.

See it if You like improvisational theater, enjoy musical comedy.

Don't see it if You need to be in a theater with comfortable seats (I felt like I was sinking into my seat!), only enjoy shows with fancy sets and props.

See it if You want to laugh. I liked the first half much more than the second, but absolutely funny throughout.

Don't see it if If you don't like improv or you don't want to laugh.

See it if You're expecting improv with all its laughter, actors laughing at themselves also and a fun time; you can embrace the weird

See it if Like improvisation, enjoy talented performers who create a new show out of one song. Our show's name was "The Purple Cow "

Don't see it if Jokes are not always smart and voices are not clear.Curious if improvisation is for real or actors use pre-worked pieces

Also Get rid of "Co-Host", "Emmy Award Winning TV personality" Katie Linendoll. She is no fun, no brain and doesn't know what to say... Read more Read less

See it if You don’t mind or like improv.

Don't see it if You have an aversion to improv.

See it if You like improvisation. It was about an awards show.

See it if You’re a fan of improv comedy and humorous songs. You’re looking for a night of laughter and light entertainment.

Don't see it if You don’t like improv. Although the singer/comedians are talented, a lot of jokes don’t land. Some segments are great, some bomb.

Also Due to the nature of the show and the rotating cast, each audience is bound to have a different experience. Fortunately, every cast member at my performance had excellent improv skills, with Robert Z. Grant the standout. The concept for Broadway’s Next Hit Musical’s first half is very reminiscent of Whose Line is it Anyway? down to the four contestants and the snide host. The second half, which has the cast creating a full musical on the spot, suffered from a drop of energy during my performance. I felt anxious to leave at about an hour and a half in, perhaps the natural point to which an improv show can be stretched. Still, there were moments of hilarity throughout, and I had a fun night overall.... Read more Read less

See it if you enjoy improv, good singing, clever repartee. Each of the performers proved able to match the others in quick thinking.Bravo.

Don't see it if if are uncomfortable with improv, wittiness in abundance and the chance to laugh, laugh, laugh.

See it if You like improvised shows and want to have a good time. Very talented and quick-minded actors that perform well together and individually

Don't see it if You prefer different genre or a bigger production or don't like surprises.

See it if You appreciate the creativity of improvisational theater

See it if you'll enjoy a satire that indirectly explains how & why the music & lyrics of modern musicals sound alike & banal.

Don't see it if you find improv tiresome.

Also Every performance is different because the songs are improvised on the spot from a raffle of titles provided by the audience. There are also more performers in the troupe than performed the night I attended-it appears the show presents 4 performers, 1 pianist, & 1 emcee per show.
When they're good, as the performers I saw certainly were, they do a remarkable job of inventing music & lyrics for a non-existent show--and performing them with a consistency that almost makes you believe they actually come from a real show.
No need to see the Tonys after seeing this.

“Broadway's Next Hit Musical” hasn't been reviewed by any Critics (yet!)