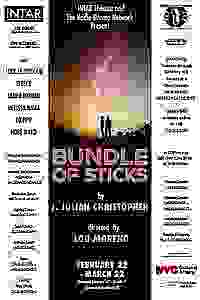 Gay men from across the globe attend gay conversion therapy called The Sticks in the underground city of Coober Pedy, Australia. When they arrive they are not only challenged by Otto, their toxically masculine group leader but also by the rainbow serpent responsible for the protection of water and erections. The Sticks is real but what it promises is not.

See it if you’d like a smart excursion into gender-bending that puts the (discredited) conversion therapy to cure gayness on trial.

Don't see it if girls playing boyz & being fully sexual about it might twist your shorts. Read more

See it if Compromise rating. Fascinating view re the gay community Intar keeps its great history

Don't see it if Not for the easily disturbed. Location for Intar a problem for public transpiration but the growth of theater in the area will help.

"This is a subject that has been treated at length elsewhere, more critically and with greater sensitivity, and in trying to bring something new to it, Christopher turns it into camp, and unfunny camp at that."
Read more

"Ultimately, the men and the serpent defeat Otto together, and some expendable moments and dialogue aside, Bundle of Sticks engages the audience with humor and imagination, culminating in joyous freedom for the men and their natural desires."
Read more

"Raw and with moments of imagination, 'Bundle of Sticks' could afford to stylistically dive deeper into its author's wild imagination. For now, there are sparks but little fire."
Read more