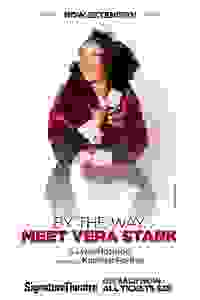 By the Way, Meet Vera Stark NYC Reviews and Tickets

It’s the Golden Age of Hollywood, and aspiring starlet Vera Stark works as a maid to Gloria Mitchell, an aging star grasping at her fading career. Worlds collide when Vera lands a trailblazing role in an antebellum epic starring…her boss. While Vera’s portrayal of a slave turns out to be groundbreaking, decades later scholars and film buffs still grapple with the actress’ legacy in Hollywood and the impact that race had on her controversial career.

Don't see it if 2 1/2 hours. Angry, rambling & often annoying act 2. Vera's life & work is interpreted through the self-interest of others.

See it if u want to see Signature's take on another early Nottage play & to see glimpses of the stirring playwright she has since become.

Don't see it if u expect the bite and heft of Nottage's most successful plays; u don't want to bounce around from style-to-style, tone-to-tone for 2 1/2 hrs

"Though the director, Kamilah Forbes, doesn’t always nail the fouetté-on-a-dime rhythms and not all of the actors are on the same page it’s still a delight...For a play about a former maid, 'Vera Stark' is not especially orderly. But it is such a good show — so clever, so playful, so keen to shapeshift and timeslip and whiz through half a dozen separate genres...that I spent the next several days trying to figure out why it isn’t an absolutely great one."
Read more

“Although production often misses its step, it’s a welcome reminder that Nottage has a tricky pinball brain, capable of whanging through the decades and lighting us up with humor and rage...Forbes’s staging slow things down instead...Forbes’s experience is mainly in dramas, and so the tonal balance is wonky here...Forbes elicits exaggerated performances; it often seems like the actors are playing to a nonexistent balcony.”
Read more

"Directed with zingy energy by Kamilah Forbes, can at times feel like a revue by an aging vaudeville star—a bit broad, a bit padded—but it’s anchored by a crackling central performance by Jessica Frances Dukes. And it’s a compelling reminder of Nottage’s playful inventiveness...Dukes keeps the center of 'Meet Vera Stark' sharp and shining, and of her fellow performers, Simms is there with her, dexterously walking the line between the satirical, the farcical, and the humane."
Read more

“Nottage switches styles from screwball comedy to backstage realism, and director Kamilah Forbes effortlessly keeps in step. The comedy is still plenty tasty, but the style is much more cutting...The second act...retains its jarring shift in style...This switch to satire bears out Nottage’s cutting point...But these one-dimensional parodies are too mean and obvious to offer either intellectual enlightenment or belly laughs."
Read more

"A comedy with a sharp satirical kick, but one that is at bottom commandingly serious. It’s also one of the smartest plays, by Ms. Nottage or anyone else, to open in New York in recent years...'By the Way, Meet Vera Stark' would profit from a slightly less frenetic production, one that allowed the play’s comic punches to land on their own instead of being telegraphed to the viewer. The cast, however, is splendid."
Read more

“’Not for lovers of more conventional comedies: Its humor may be too barbed, its skepticism too all-embracing. Nevertheless...it amuses and dismays in equal measure...Forbes, allows the cast to play too broadly in the early scenes...Things improve enormously as the play goes on...with the cast markedly more at home in the second act...’By the Way, Meet Vera Stark’ remains a knockout, an inventive work that sheathes some very provocative ideas in a riotous package.”
Read more

“A visually stunning revival...The fictional melodrama presents a Hollywood version of Southern gentility and nostalgia-infused slavery...As a satirical comedy, there are a lot of laughs, but sometimes at the expense of rich character development...Still, as directed by Forbes, this is a topnotch production...The play does not try to conceal the underlying dark truths, but they are made palatable (and immensely entertaining) as if projected with the gloss and panache of a 1930s film epic.”
Read more

“’Vera Stark’—played by the dynamite Jessica Frances Dukes is one of the juiciest characters Lynn Nottage has ever written...As a play, however, ‘Vera Stark’ is one of Nottage’s least cohesive—enjoyable and zany, but uncharacteristically uneven...In Act 1, we meet aspiring actress Vera...The whole shebang has a screwball-comedy feel...Act 2, however, is like an entirely different play...If only we could fast-forward...and get back to the real drama: Vera.”
Read more

“’Vera Stark’ attempts many things at once...In this elegant production, it is ultimately much as it was in its 2011 debut...funny, smart, frequently clever, and ultimately successful in achieving only some of its goals...Vera’s regally self-dramatizing turn as the grand-dame talk-show guest is simply sensational...But the early scenes lag, and the academic spoof in the second act is obvious and unnecessary. And the hinted-at deep secret is left unexplored.”
Read more

"The show is sharply satirical and extremely funny; Forbes’ direction emphasizes the satire and the screwball comedy, highlighting the craziness of the situations. Forbes expertly weaves together the tonal and genre shifts embedded in the text, making the transitions seamless...This sort of cultural examination, particularly of female cultural figures, is much more in the mainstream in 2019 than it was in 2011."
Read more

“A fiendishly clever satire...Forbes has done her utmost to help her actors make the most of the play's many hilarious acting opportunities...The stagecraft is excellent...The second act's structural shift is fun...However, the parts focusing on the symposium panel are somewhat awkwardly staged and overly broad...Despite the second act not being a straight A, I was happy to meet this 'Vera Stark' — as I think you too will be.”
Read more

“A well intentioned play that never lands in one spot. We hear about Vera’s struggles in a way that is more a litany than a gut punch...We never get into the heart of this woman. Nottage is taking wide swaths through this territory and covers a lot of ground. But in the end it feels more like a hop-on hop-off bus tour. We see it but we don’t feel it. Everyone is a caricature and the beating hearts that keep them alive never surface.”
Read more

"Director Kamilah Forbes seems strangely ill at ease with the play’s comedy. Scenes that should fly by seem to stumble along; the classic rat-a-tat screwball style is only sometimes present...If the style isn’t quite there, though, the performances help make up the difference...Forbes has a tighter handle on that second act.”
Read more

"Even in a year that has garnered multiple Oscar nominations for the films 'Black Panther,' 'Black KKKlansman' and 'If Beale Could Street Talk,' Lynn Nottage's seriocomic 'By the Way, Meet Vera Stark,' which tells the fictional story of the first African-American woman to receive an Oscar nomination, feels entirely relevant today."
Read more

“Nottage's intelligence, wit, and craftsmanship are writ large…but its stylistic leaps along the spectrum from farce to realism do little to draw one into its world and lots to keep one at a distance. Nor does…Forbes's attractively mounted but barely nuanced production manage to find a tone that consistently ties its disparate scenes together. With a few exceptions, the approach is forced farce, seeking laughs by egregiously overstated comic acting,…which pulls focus from Nottage's ideas."
Read more

"Makes a good case for its strengths without managing to minimize its flaws...The first act is so entertaining that the shift of gears after intermission comes as somewhat of a letdown...The actors are all very good, although I did occasionally wish...Forbes had asked them not to play things quite so broadly...While the satirization of Hollywood in the 30’s is hardly subtle, it is both entertaining and enlightening. Despite its second-act problems, the show is well worth seeing.”
Read more

“An amalgam of every black actress who had to mold herself to fit white perceptions of her sexuality, talent, and intelligence. But instead of a heavy-handed treatise of the evils of discrimination...Nottage delivers a screwball farce skewering reductive racial attitudes...Forbes’ staging is much broader than Bonney’s version which works well in the more outrageous sequences...Occasionally Forbes pushes too hard and the proceedings become more like a campy SNL skit."
Read more

"The problem is in the direction...At times the pacing is too fast and jokes fly by before they can register. Other moments drag on, particularly a few of the segments that use video. And some of the costume choices, especially the dress Vera wears in the second act, try too hard. My sister, who loves ‘30s movies, hadn’t seen the earlier production of the show and so I invited her to this one. She struggled to stay with it but eventually fell asleep."
Read more

"The cast is terrific, and director Kamilah Forbes effortlessly shifts the action between disparate tones and styles. While act two does drag, Ms. Nottage writing is incisive and engaging...A smart satire that takes a piercing look at the damage done by early Hollywood representations of people of color, and the legacy that echoes forth today. With a terrific cast and Lynn Nottage’s is incisive and engaging writing, this play is an easy critic’s pick."
Read more

"The beauty of this production is how Nottage chronicles the development of Vera Stark...Act II brings all the tropes together and the liveliness of the conflict between the black male and the two female guests is superbly done...Then Nottage in the last few minutes configures another fabulous revelation that is poignant and beautiful. You will just have to see this wonderful production to appreciate it for yourself."
Read more

“Humorous, thought-provoking...The first act is pure screwball comedy...The second act has a harder edge...Forbes carefully stages it to keep the decades straight...The talented cast does double duty in this production...Nottage gets in the most social criticism, while not letting up on her key premise — the lack of meaningful roles for women of color in Hollywood...Think of it as the kind of theater where no one is safe.”
Read more

"Everything about this play, from cast to crew, enraptures you. The question is are you ready and open? For all that you may laugh, comedy is based on tragedy, and, nowadays, the tragedy of racism is still a prickly topic for people."
Read more

"Forbes’ production manages to exacerbate this over-long show’s weaknesses...What Nottage has written as satire instead comes off as farce, and scenes meant to send up both outdated performance styles and modern-day academics turn them into broad caricatures...’Vera Stark’ has some timely things to say about the challenges facing black artists — but it presents a tonal challenge to even the most talented companies that this production can’t quite meet.”
Read more

View in admin
I
Adrian Dimanlig

“The first act is unadulterated farce that’s handled with confidence and an infectious comedic flair...However, the play’s second act is reminiscent of ‘Sunday in the Park with George’, both in its awkward satire of contemporary arts and academic circles and its jarring, notoriously problematic shift in tone. To compensate...Forbes has chosen to forcefully push some of the play’s satirical elements, at times detracting from the bite of Nottage’s script. "
Read more

"Nottage uses a captivating blend of parody, broad humor, academic wit, social comment and even drama, to create a biting satire...The charming Jessica Frances Dukes makes Vera utterly believable with a strong colorful performance that sustains the character’s lively humanity...Kamilah Forbes’ uneven revival for the Signature is much broader than Jo Bonney’s original staging, and this becomes a problem. Going too broad with this comedy actually-dilutes the humor."
Read more

"Lynn Nottage's 'By the Way, Meet Vera Stark' begins as a funny and pertinent critique of white Hollywood and its persistent boxing-in of Black actors...Unfortunately, Nottage muddles her purpose with some bizarre tonal choices."
Read more