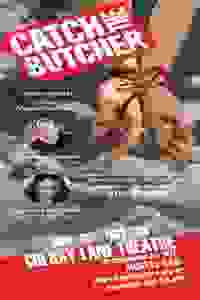 Cherry Lane Theatre kicks off its 2015-16 season with the Off-Broadway debut of 'Catch the Butcher,' a dark comedy about a woman who sets off to find a serial killer - and love.

A serial killer dubbed "The Butcher" has been terrorizing several towns in Texas, having killed eleven women before dropping their remains in the river with a poem attached. While most women are in fear for their lives, Nancy is instead curious. This causes her to search out "The Butcher" and when she finds herself in his basement, she likes it.

See it if you'd like a play about a serial killer whose latest victim falls in love with him.

Don't see it if you dislike absurdist plays.

Don't see it if Special effects could have been better but still loved it.

See it if You like quirky comedy. Loved Angelina Fiordellisi

Don't see it if You're easily offended by dark humor

See it if you enjoy small performances spaces and a twisted plot.

Don't see it if you don't enjoy a slow plot.

See it if Amazing script. Just read the published copy. So good.

Don't see it if You can’t. It’s closed. Read more

See it if you want a show with a lot of tension and a bit of mystery.

Don't see it if you want to feel connected to characters that have a dark side. I was expecting to really see some deep character analysis; I didn't.

Don't see it if You want more than a story about cats being bullied.

See it if This show popped up in my list of shows I saw this year. Holy cow it was nuts. Which is great. More theater should take as many risks

Don't see it if If you like safe theater.

"Quirky, unsettling and rewarding...The principals gradually find their rhythm, but once they do, they skillfully assay Mr. Seidel’s effective blend of romance, absurdism, satire and - buttressed by Quentin Chiappetta’s haunting ambient music - dread. It’s a tricky balancing act, but the company retains its footing."
Read more

"'Catch the Butcher,' a curious, neatly directed and wonderfully acted new play that defies category but keeps you riveted, changes all that. This is a new one: a play about a mass murderer who kills women, written and performed in the style of a sitcom. Don’t be put off by the subject matter. The play is never remotely gory. In fact, it is delightfully different."
Read more

"It's impossible to tell what writer Seidel was after - a straightforward thriller, a black comedy, or some combination thereof. I can personally testify to the total absence of tension on the stage, and, regarding humor, I will add that, aside from a handful of snickers, the audience at the performance I attended was a silent as the grave."
Read more

"Though Seidel spends most of the 90-minute evening viciously skewering tropes, in the last seven minutes or so he gives in to them and turns 'Catch the Butcher' into exactly what it's been rebelling against...Violence, in general, is no laughing matter, but once Seidel has started you down that road, you don't want to exit from it quite so quickly. If 'Catch the Butcher' is in the end unsatisfying because of its finale, the run-up to it is a killer in all the best senses of the word."
Read more

"Playwright Seidel replaces cliché lines about falling in love with language of finding out what it’s like to be normal. He crafts some notably co-dependent characters in this bizarre play. Director Fratti keeps the story moving, but can't quite find a suitable tone...'Catch' feels sadly forced. It’s neither enough of a black comedy, nor sexy enough for the bondage play it could be. And it’s got nowhere near the nuance it would take to make it a fascinating Genet-like power play."
Read more

"'Catch the Butcher,' for all its implausibilities, actually might have worked as an offbeat comic thriller had it been buoyed by clever direction, sprightly performances, and a flexible setting, none of which it receives. The pace is funereal, the scene shifts...are interminable, and the would-be laughs little more than forced titters...'Catch the Butcher' may be about a serial killer, but that’s no reason for it to be so deadly."
Read more

"The playwright puts these characters in a situation so dire that you want to dismiss it from the get-go as too far-fetched and dramatic. However, you can't because they catch us in their clutches...The dialogue is in turns funny, ironic, ominous and even heart wrenching."
Read more

"'Catch the Butcher' has a wonderful actress, is smartly directed, but goes nowhere, which is odd, because this show about a serial killer and the woman, who intentionally wants to be his next victim, ends pointlessly... 'Catch the Butcher' had the chance to be a really interesting and delve into so really dark places, unfortunately it was just a superficial play done for laughs."
Read more