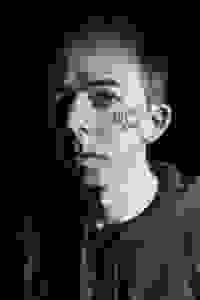 After five years of sold-out runs at the Edinburgh Fringe and tours to Australia and Europe, British improv sensation Chris Turner makes his New York debut with this one-man comedy and hip hop spectacular. More…

After five years of sold-out runs at the Edinburgh Fringe, and award-winning tours to Australia and Europe; British improv sensation (and Oxford-educated white boy) Chris Turner makes his New York debut with his most ambitious show yet: a one-man comedy and hip hop spectacular. Jaw-dropping freestyles, hilarious stand-up, and dextrous raps combine for an hour of high-octane musical comedy that will have even the most avowed Kanye-haters nodding their heads to the beat.

See it if you like funny, breezy solo shows. CT is an endearing entertainer. He sings, dances, tells jokes. Time melts away. His dad is missing a lot

Don't see it if you need a plot or set (you do get a golden mic). Some words get lost. Not all jokes land. Still, I forgot the world's troubles for 75 mins!

See it if If you want a good stand up comedy show repeat with hip- hop, this is an entertaining show. A little over an hour and very good acting.

Don't see it if Some jokes fall flat but still good. If you dont like hip hop.

See it if u want to get a surprisingly erudite lesson in rap/hip hop from a witty, winning white guy that's equal parts freestyle & scripted rhymes.

Don't see it if ur not at least marginally familiar with hip hop figures Biggie, Tupac, Jay-Z, Eminem, etc.; u expect a "spectacular"; u have ailurophobia.

Also Like Baba Brinkman, who frequently performs his "Rap Guides" at Soho Playhouse, Chris Turner is an unlikely purveyor of rap music and hip hop schooling. And like Brinkman, this white guy is an adept rapper who fuses beats with humor and literacy.

Not all of Turner's jokes land, and his scripted poetry isn't as strong as his quick-witted improv'd raps, but he is a droll, smart, canny performer who puts on an entertaining show, even for those who aren't fans of rap. And although this is being marketed as a "hip hop spectacular", this a modest, unadorned production that is heavy on humor but short on spectacle.

See it if you don't know much about rap & want to learn. Chris is an excellent teacher and amusing rapper. Fun freestyle based on audience suggestions

Don't see it if you expect hardcore negatives associated with rap. Not a play. There is no plot beyond the history of the form & Chris's relationship to it

See it if Pale Brit rapper proves with ease that not only natives are allowed claim to the American mainstay musical genre. Faux freestyling is fun.

Don't see it if Where the tunesmith may be lacking, the intelligent wordsmith emerges.This might not be your lane, but props have to be given to his daring.

See it if The last 3 minutes where he gets 20 minutes of words into a rap song are entertaining. He's very fluid & good at what he does.

Don't see it if He should have had the common sense not to rap about audience members' suggestions of "full blown AIDS" or a rant about "white women".

See it if You enjoy clever puns and rapping/hip-hop.

Don't see it if You want classic stand up comedy. You aren’t interested in rap.

See it if you enjoy British humour and clever rapping

Don't see it if you like deep, thought provoking productions

See it if Funny charming intelligent rapper/comedian. Some parts much better than others- but that is nature of freestyle. Best when just talking

Don't see it if Don’t like rap at all. Prefer more scripted presentation

See it if You like hip hop, comedy, and intelligent humor.

Also This was hysterical. He has a real love of hip hop and does both freestyle raps (rap improv if you don’t know what that is) and pre-set songs.

Everything about the show was well thought out and delightful.

See it if you want proof that hip hop can be sweet, fun, and done by a talented, charming, young white Brit.

Don't see it if you want a more structured, challenging event.

Also I give Mr. Turner props for risking going there--a difficult undertaking for any white boy. But, though he's clever, at times funny and endearing, and has some writing chops, it's not a great evening. His freestyle rapping skills are formidable. But still.... Read more Read less

See it if you enjoy british style humour, groan worthy puns, and excellent freestyle rap skills, all presented by a charming comedian

Don't see it if you absolutely can't stand rap (I'm not a huge fan, but loved this), or dislike expletives - there's parental advisory on this rap album

Also Chris is a fantastic british comedian, with witty jokes and an impressive talent for freestyle rap - the jokes are great, they don't all land, and some seemed to go over the audiences head, but they are so fast-paced you'll be laughing at the next without much issue.

I'm not a huge rap fan personally, but loved what he did with the medium, and I loved the clever word play and puns throughout - might not be for everyone, but I loved this!

See it if you enjoy erudite stand-up comedy, parodies, and freestyle rap. Turner is talented, charismatic, and self-aware.

Don't see it if you don't have patience for stand-up that is funnier in some moments than others. Freestyle raps & patter are stronger than the songs/poems.

Also Turner seemed to be having fun up there, and the audience also had a good time. Turner's freestyle rapping, using suggestions from the audience, is truly impressive. His straight stand-up bits are also funny and well-delivered. He has good comedic timing and a friendly rapport with the audience. The first 10 minutes had me settling in for an uproarious show.

Unfortunately, most of Turner's prepared songs and poems are not as funny as I'd hoped. They include clever lines and puns (some of which take a moment to land), but given how good his freestyle raps are, you'd expect the prepared raps to be better.

Overall, this show is enjoyable and unique. It was well worth the $5 Showscore tickets I got, but I probably wouldn't have paid the full ticket price of $39. Turner is a talented performer, and I hope that he'll learn to play to his strengths in the future, spending more time on freestyle and straight stand-up routines. He has a well-defined, likeable persona and a unique style.

See it if want to see a surprisingly funny uplifting show. Check your assumptions at the door... sweet and entertaining.

Don't see it if If you're are not interested in stand-up and /or are looking for a theatrical experience.

Don't see it if You dislike sampling improvisational material, hate hip-hop, rap music - even light versions. Do not enjoy off, off B'way fare.

Also Chris Turner's demeanor and performance, are so different than the somewhat "scary" photo in the ad for the show suggests!
Think another, picture of Chris might draw more of an audience.
... Read more Read less

See it if If you like free style rap and like one man shows. Chris is a good free style rapper from th UK and he was funny. Go see him

Don't see it if If you're not into rap music and you're too old to relate. Some older people in the audience looked lost..lol

See it if You enjoy improvisation and rap.

Don't see it if There are explicit lyrics, which may be a turn off for some. Also, not entirely improvised but still quite funny. **you don’t like cats**

Also I went in not expecting much, but I found his material to be quite clever and enjoyed myself. It is only just over 1 hour, so traveling 1 1/2 hours or more to get there leaves you wanting more. Not 100% improvised, but still rather funny. He is quite skilled at creating raps out of random words.... Read more Read less

See it if You want to feel like having a fun Evening out.

Don't see it if You’re so cool already you can’t learn a thing about rap and hip hop.

See it if you are a fan of comedy, period.

Don't see it if looking for something PG rated. Get triggered by identity politics.

Also This is a bold NYC debut from a British comic who has a bright future ahead of him. The show incorporates audience participation, freestyle rapping, poetry, musings on current hot topics. Plus cats! Audience ate it up. Great date night show. Recommend.... Read more Read less

See it if You want a light-hearted night out, enjoy improv, and like a more suburban style of rap.

Don't see it if You don't like audience engagement, want a more traditional stand-up routine, or don't like rap in any forms.

See it if you like seeing talented people perform, stellar shows, cats, and wholly entertaining works

Don't see it if you don't like to have fun or laugh.

Also A superbly entertaining show that appeals to a broad audience - as there are suggestions thrown in from the audience, it is a bit of a choose-your-own-adventure show on the freestyle rap front.

Chris is a talented and hilarious wordsmith whose one-hour show goes by faster than you want. Would definitely recommend and take friends to this again.

Loved Colonel Widdershins' role in the show. The Colonel plays an integral part of this show, bringing together the one-hour performance as a sweeping success. He and Chris are a dynamic duo unlike anything else.

Note: Although there is audience participation, it isn't necessary to participate yourself - it's just more fun if you do.

See it if If you are into hip hop rap and comedy then this show is for you. A very smart, funny and talented entertainer.

Don't see it if If you really hate rap this show won’t change that. But you might enjoy him taking the piss out of the bad ones. So try it any way.

See it if you want to have a delightful night with a very creative and clever show. Very interactive!!

Don't see it if you are not open to to accept a challenge in entertaining!!

See it if you enjoy improv comedy, hip hop, new comic voices, and don't mind some uneven stretches (only a couple of these... way more good bits)

Don't see it if you don't like hip hop or improv, prefer stand up comedy that is tightly written, or generally prefer plays over comedians

“Chris Turner: "White Boy"” hasn't been reviewed by any Critics (yet!) 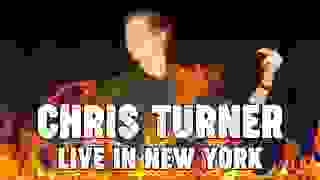 Get a sneak peek at Chris's most ambitious show yet - a one man comedy and hip-hop spectacular! 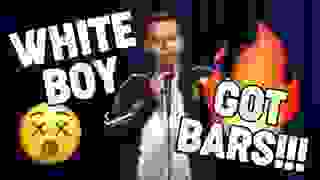 See why Chris has been called "The UK's finest freestyle rapper"

Award winning comedian and rapper Chris Turner demonstrates his considerable talents with a completely off the cuff freestyle in front of a live audience! 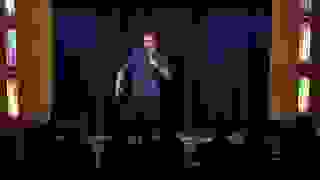 Enjoy this little nugget of comedy about DIY and Britain's most influential invention, from Chris' previous tour show. 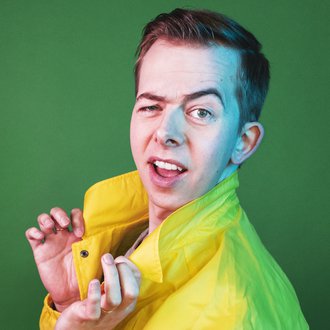 Chris Turner
Writer / Performer
Get Alerts Alerts On Alerts Off