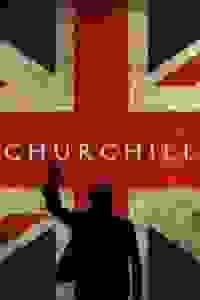 A solo show where Churchill discusses his failures and his successes; his love of art, liquor and women; and the bravery of Britain's finest hour.

It is March 1946. In the past year, the influential Nobel Prize laureate Winston Churchill has led Britain and the Allies to victory in the European Theatre of World War II. He has also shockingly been defeated for re-election as Prime Minister. Sitting in forced retirement with his wife Clementine at their Chartwell home, Churchill receives an invitation from President Harry Truman to speak in the States, at Westminster College in Fulton, Missouri, where he will deliver his legendary, emphatic “Iron Curtain” speech. He arrives in Fulton to an informal and esoteric gathering of friends and supporters, and shares his life in flashback and through storytelling.

See it if you like biographical one-man shows. I enjoyed spending time w/ WC, altho some parts dragged. The acting was solid, but not dazzling.

Don't see it if you're uninterested in Churchill's story or British history. This traditional play isn't super-exciting, but it is enjoyable and edifying. Read more

See it if you are into biographies. One man-show. It is interesting and informative.

Don't see it if historical slow paced show. Some of the characters and plots are better understood with some knowledge of British history.

See it if You are interested in history or Winston Churchill and enjoy one man shows.

Don't see it if You aren't interested in Winston Churchill

See it if You really enjoy British/WWII history, and want a first-person history lesson from Winston Churchill complete with witticisms.

Don't see it if You're expecting a show with plot and stuff; this is literally just Churchill talking at you the entire time.

See it if you enjoy good oratory and speeches. This is a one man show and if you've an interest in Churchill you'll find this appealing

Don't see it if you're expecting a dynamic production, this is very traditionally monologue

See it if History or His-story is your jam. A great performance.

Don't see it if the man, the legend, the politics, or the famous one-liners do not interest you. Its a one man show, so its all Churchill.

See it if You're a history buff

Don't see it if You're not a fan of Churchill

"This is not a play that particularly seeks contemporary resonance. Mr. Keaton, who bears a resemblance to a trimmer Churchill, has opted for breadth rather than depth in recounting an anecdote-rich life. 'Churchill' too often fails to stir any emotion. The man we see before us is friendly and a bit of a wag, but he’s not fiery."
Read more

"A charming tribute to the great wartime leader, but not a very compelling bio-drama. We see Churchill wrangle with Hitler, but never with himself...'Churchill' is akin to estate-approved jukebox musicals. You get to hear Churchill's greatest hits performed by a talented actor doing a decent impersonation. If that is all you're looking for, this is the show for you. Just don't expect to walk away with any new insights on this venerated historical figure."
Read more

"Keaton summons the spirit of Churchill beautifully. Stout of figure and voice, he projects a judicious authority, a distinctly English, no-nonsense jolliness, and the simple power needed to prosecute the darkest depths of World War II from a platform of even-keeled reality...But his writing doesn't even close to mimicking the wit of the real Churchill, and it doesn't have to, but it's so short on laughs and energy that the difference makes the evening as a whole far rockier than it should be."
Read more

"Since this is Churchill speaking through Keaton, it may be the world leader's devotion to language and the masterful manner in which he uses it that comes across most piercingly. The skill with a quick tongue alone makes him a delightful person to pass the time with. Keaton makes that point above all others."
Read more

"Why would the ambitious gentleman who both wrote this turkey and has the misguided courage to go on stage, alone, to perform it — why would he choose the most pedestrian material of the Churchillian oeuvre? It's comfort at the price of tedium. So, 'Churchill' might have been a home run but settles in as a sacrifice fly."
Read more

"It's as if we’re attending a lecture tour Churchill might have delivered near the end of his life. It’s a powerful meta-theatrical technique Keaton and director Johns make the most of. Charming, deep, emotionally affecting, expertly crafted, and (incidentally) informative, 'Churchill' is a solo show that feels bigger than a solo show.
Read more

"Churchill’s immense charm shines through as Keaton’s adaptation of Churchill’s own words makes him human while keeping him larger than life. The script takes fullest advantage of Churchill’s own wit to create the intimacy so vital in a one-actor show. Keaton is a fine actor to be sure. He maintains just the stiff upper lip."
Read more

"Churchill" is a magnificent look at history through the eyes of one of the men who crafted it. As Churchill, Ronald Keaton engages naturally with the historic figure at hand. He presents a man who, while conscious of historic posterity, seems more concerned here with telling a good story."
Read more

"Solo shows can be tricky but Kurt Johns has seamlessly directed the action so nothing ever feels forced. All three elements, the text, the actor and the direction are so natural, you honestly believe you are watching Winston Churchill reincarnated before your very eyes. It is a flawless performance."
Read more

"Very enjoyable and surprisingly emotional...Keaton is blessed with being eminently likable on stage. Thus his Churchill is neither gruff nor imposing, but human. And, in that way, great company for a couple of hours of straightforward summer theater. This earnest, honest and deeply reflective piece of theater reminds us of how, in politics as in business, integrity, courage and relationships are what matter the most."
Read more

"Keaton arrives on stage and the more you watch him and listen to him, the more he becomes the man himself. It is a triumphant performance, capturing the essence of the man without mimicry of any kind. And the script is superbly modulated to capture a multitude of moods and events, and the dramatic ups and downs of a remarkable life."
Read more

"Smoothly directed by Kurt Johns, we are taken on a journey that allows us into the heart and soul of an often quoted statesman...Keaton has taken Churchill’s own writings and the teleplay 'Winston Churchill' to a new level and has opened the pages of history so that we can peek in and see the man behind the legendary stories...For those of you who love a bit of comedy with your history, catch this brilliant biography."
Read more

"Winston Churchill was a statesman and a total badass. Ronald Keaton never shows us the formidable temperament behind them. Genial, sly, occasionally poignant, the performance is engaging but lacks bite. It's as if Keaton were playing a nostalgic old pal of Churchill's rather than Churchill himself."
Read more

"This is not only an educational production but a highly entertaining one, often humorous and filled with moments that touch the heart as well as the intellect. Mr. Keaton’s determination to develop and bring this show to life is a real labor of love, and it’s a must-see, inspirational production that promises to speak to every generation."
Read more

"He seemed to be channeling Churchill on stage! This is a “must see,” tour de force performance magnificently performed by one of the finest, under appreciated actors working in Chicago. Keaton captures the eloquence, the passion and the determination that fueled this complex man...I think Churchill would pour a whiskey and light a cigar in homage to Keaton’s portrayal."
Read more

"However gloomy its premise, this is no dry fact-choked schoolroom lecture. Assisted by projections that locate us in time and place, Keaton has authored a brief glimpse of the "British Bulldog" rich in the acerbic wit and stirring rhetoric that renders Churchill's aphorisms quoted to this day."
Read more

"Keaton’s play has the look and feel of a docudrama/history lesson.I never became emotionally engaged or connected with his Churchill. As Churchill, Keaton has his bag of brilliant acting tricks but the story itself lacks the emotional punch to make the show resonate."
Read more

"Ronald Keaton in a tour-de-force, one-man show...Keaton’s commitment and dedication to bringing the larger-than-life character of Winston Churchill to the stage is evident in the historical detail and emotional honesty he brings to his subject...a bold, but intimate production."
Read more