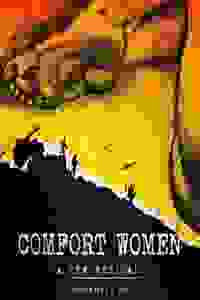 Set in Seoul during World War II, this Off-Broadway drama follows a young widow looking for work who is kidnapped and made a sex slave, or so-called Comfort Woman, for the Japanese Imperial Army. More…

Writer and director Dimo Hyun Jun Kim tells the story of Goeun, a young woman who is promised a well-paying job at a factory in Tokyo so that she may support her family. Instead, Goeun is held hostage, transported to Indonesia, and sold into sexual slavery as a "Comfort Woman" to the Japanese Army. She and her fellow Comfort Women navigate this life-altering experience together, befriending each other and planning their impossible escape. Based on the real-life accounts of a few of the 200,000+ women who were trafficked into slavery, the production will send all proceeds to The House of Sharing, the official home of the surviving Comfort Women.

See it if You want to see young artists in an earnest attempt at drama. If you have never heard of this story, this is at least a beginning.

Don't see it if you really want to know about the Comfort Women. The crawl at the opening curtain had more information than the ensuing 110 minutes.

Also Ihate writers to invoke something: like the tragedy of what happened to these girls and then relegate it to backdrop.
The women were not distinctive enough to understand who they were as people, why they signed on to go to a better life. Each was given a quick scene, a song to establish character.
2 were beggars, one wanted to find her brother and one wanted to be a singing star. But give me some personality, something to distinguish the actors. The actors kept changing their clothes and assuming new equally indistinguishable characters.
The play is called Comfort Women. Tell me more about the women. Not a story where the men have all the action and tension. I have wanted to know more about these women since
the recent Japanese govt apology. The program says these were real people, what became of them? How were their stories elicited.
I wanted to love this musical, but it failed to capture any drama, any degradation any true cost to these women.

See it if you are interested in learning about horrible Japanese exploitation of Koreans, especially women.

Don't see it if you expect in-depth understanding of the topic, non-stereotyped characters & strong emotional impact that should occur with such a subject.

See it if want to see a wonderful and moving depiction of a complicated aspect of history, with a huge and talented cast--odd and unexpected.

Don't see it if don't like a large cast with many interwoven characters and plots.

See it if You would like to see a show about how the Japanese used women as sex slaves for their military.

Don't see it if You are not interested in historical events against the Japanese and their treatment of some women.

See it if U want to C a brillant show about a true story that captivates your heart. A beautiful story of heroism, love & relationships & hatred

Don't see it if Don't like seeing the horrors of war

Also The staging is clever. Dances were unique & memorable. Music This is an extremIy well done play.
The seats in that theater are so uncomfortable but worth it for this show
... Read more Read less

Don't see it if you are looking for a happy ending

Sing out Louise
New York City
35-49 |
145 reviews
Get Alerts Alerts On Alerts Off
55
Learning about moments in history can be uncomfortable...
August 10th, 2018

See it if Based on true events: sexual slavery by Imperial Japanese Army in WW2 of young Korean girls/women

Don't see it if musical theater can spotlight serious/dark subject matter, but if you don’t agree, than this isn’t for you. worth future development

Also This review is for the current production at PH August 2018 not for 2015. There are two similar listings on Show Score with the same art work... Read more Read less

See it if You want an original musical...good voices...good staging but sometimes amateurish.

Don't see it if You want an uplifting night at the theater.

See it if Musical. Korean women forced into sex slavery by the Japanese army in WWII. Should have been heart-wrenching. No character development.

Don't see it if Characters thin. Story disjointed. Continuity absent. Impossible to follow unless you already knew details of the story.

Don't see it if You do not want to see a musical based on a true story aboutwt historical facts in a theatrical setting, wt young Asian cast. Small theatre.

Also Some of the cast members were very strong, the singing and dancing about sex slavery of the Korean women in Japan were very moving (the story is based on a true story).

The musical seems unfinished and trying to do all at once but the storyline is amazing and the young cast seems very promising, wt a little work, they could use their potential.

See it if you want to learn something about the Japanese occupation of Korea and how they enslaved the people. Some good acting and singing.

Don't see it if you can't sit for 100 minutes in the uncomfortable seat of this theater. My butt started hurting halfway through. Slow moving story.

See it if Talented young Asian-American actors tell an important, true story of WWII. Korean women under Japanese occupation are lied to and told

Don't see it if Varying degrees of talent do not spoil the story but it is obvious many amateur performers are involved.

Also there is factory work in Japan. They are enduring wretched conditions at home, so 200,000 sign up. When they arrive they are imprisoned and put to work as sex slaves for Japanese soldiers. Told through song and dance, these young actors, on a small stage, keep an important story alive for a new generation.... Read more Read less

See it if Posted in wrong place. saw the new version ignore review

Don't see it if If you want a fully polished show

Also I liked the story and concept a lot. Some actors were stronger than others. There was some beautiful moments and songs in the show. I was entertained but feel the show could use a bit more work and than it could be an amazing show in the future... Read more Read less

Don't see it if you want quality. The writing of book, libretto, music all mediocre and without imagination. We learn nothing about this important subject

Don't see it if Show is 110 mins, without an intermission. Theater was FREEZING cold, bring a sweater!

See it if you like a musical and/or drama that comes across as a camp or high school production.See it if you wish to support work of this type.

Don't see it if you wish to see an absorbing well-written developed book with songs making sense.

Also The show is very confusing. It is an honorable attempt. The show still needs work on the writing, direction and what it really wants to do.
The show is all over the place. It wants to be a drama and a musical. The songs seem to be pasted on afterward to attract viewers (as a musical)
... Read more Read less

See it if you are looking to support Asian artists in telling little-known stories that deserve to be heard.

Don't see it if you are looking for a finely-tuned production with strong acting. Apart from a solid lead, the overall storytelling falters.

See it if You want to see a confused play about a serious and disturbing subject. Score seemed inappropriate and actors were energetic but not "real".

Don't see it if You don't want to see a confused play with mediocre score and acting.

See it if You are open to delicate subjects beautifully set to music. See it if you want to see an original musical!

Don't see it if You are not comfortable with sensitive material although it is all tastefully handled on stage.

See it if If you like shows based on historical facts. Great voices.

Don't see it if If you do noy like historical musicals

See it if you want to see a profoundly dark story based on real history.

Don't see it if you want to see great acting or singing, or want something upbeat or uplifting.

See it if you are looking to support Asian artists, see a rarely told story on stage, and support surviving comfort women (proceeds go to their care)

Don't see it if You are sensitive to themes of sexual violence/want to bring the kids to a show with you.

See it if The choreography was superb. Very imaginative way to communicate sexuality and sexual violence.

Don't see it if You don’t want experience an absorbing production.

Also One minor thing. The American soldier was carrying an M-16. This is a Vietnam era rifle. He should have been carrying perhaps an M-1 Garand. (Does not detract). The scene with the clothesline was very funny and I really enjoyed this actor. I am just not sure that this comic element fits with the otherwise dark and intensely serious subject matter. See it anyway !... Read more Read less

See it if Wonderful exhibition of a truly intriguing story and invigorating rendition of an interesting historic moment. Great music and performing

Don't see it if could edit a few scenes down