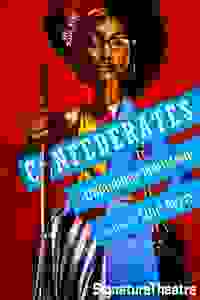 Two women, Sara and Sandra, experience parallel phenomenons even though they live over 100 years apart. The former is a spy for the Union army during the Civil War and the latter, a tenured professor at a modern-day university. Both women have to navigate the intersecting biases of racism and sexism, while trying to carve out a space of their own in their respective positions. The New York premiere of Confederates, written by MacArthur Fellow Dominique Morisseau, is directed by Stori Ayers.

See it if Masterful writing. Weaving color, sex and money discrimination in intelligent and relevant ways while making it accessible & entertaining.

Don't see it if If you want to wait for it to come to Broadway, which it is ready to.

See it if Thought provoking show that has a lot to say and does so in an accessible and entertaining way. Exceptional writing - Leaves you thinking.

Don't see it if No reason not to see this. I could see it moving to Broadway.

See it if A well written and well acted show. This could easily move to Broadway.

Don't see it if If you do not like shows off Broadway.

See it if you're a fan of the playwright, interested in her takes on slavery & academia, like plots in 2 eras & supporting cast in multiple parts

Don't see it if have no interest in slave plots, don't see a connection between slavery & today, don't get academic rivalries, can't imagine humor in either

See it if stimulating; sparks fly 4 prof trying to navigate college scene where everyone is offended by something; dynamic cast; powerful ending

Don't see it if fine ideas but not realized theatrically; 2 plot lines past & present don't mesh until end; a lot of speechifying rather than dialog Read more

See it if You’d enjoy a relevant play about the Black experience that is well-balanced in terms of its dialogue around topical issues.

Don't see it if You’re not a fan of Morisseau’s previous plays (especially “Pipeline”). This is in the same vein.

See it if you want to see a thought provoking and well written and acted drama about slavery and racism in two time periods. Very cleverly staged.

Don't see it if you don't want to hear discussions of race and slavery or politics in the college setting. Read more

Don't see it if you want a play with a joyous solution to a decades old problem. Read more

"Feels like an elegant experiment, thoughtful and put-together but not quite realizing its full potential...'Confederates' creates this tension between its two parts but doesn’t do anything with it. If Morisseau has built her stories with this inherent magic of alternating settings, allowing us to time-travel with her through a discussion of racial politics then and now, why not try to allow the worlds of the two protagonists to extend a bit more? Why not go bigger?...Morisseau is a fabulous playwright, so much so that even in her plays’ flaws her brilliance still shines through. And seeing an artist try something new in her art is exciting."
Read more

"4/5 stars...Because Morisseau is best known as the accomplished author of straightforward social dramas like 'Pipeline' and 'Skeleton Crew,' the audacious shifts of timeframe and tone in 'Confederates' come as a bit of a surprise. She pulls it off with power and finesse...Director Stori Ayers and the very fine cast of this Signature Theatre production—led by the convincing and compelling Wilson and the rigid, purposeful Lloyd—deftly handle these back-to-back back-and-forths."
Read more

"Time bends, and we do not flinch. The play’s big-swing departures from the real, asserted so confidently, are never confusing. The little unbelievabilities, though – those do itch a little...And in a farce this serious, direction is crucial. Stori Ayers keeps her cast almost airborne — the speed is so intense that the few moments of stillness hit the audience like brick walls...Morisseau has written a comedy about Black women who are ready to burn down their institutions. She doesn’t provide any closure other than rage."
Read more

"With its dual timelines and near allegorical characters, 'Confederates' is a departure from Morisseau's straightforwardly realistic works like 'Skeleton Crew,' which recently ran on Broadway, but it does share her talent for spot-on dialogue, and for humor that pops out of nowhere...Yet the play lacks some of the human interest that we find in Morisseau's other plays. The characters in 'Confederates' sometimes seem more like ideas than people."
Read more

Sandra and Sara's situations don't match up. Sara faces torture and death if caught spying. (Her unexpected sexual assault on Missy Sue -- which, to be clear, is enthusiastically welcomed -- also comes with great peril.) By contrast, the web of suspicions, micro-aggressions, and political maneuvering that ensnares Sandra may be toxic, even degrading, but it is unlikely to kill her. Both characters' predicaments are unacceptable; still, the playwright's compare-and-contrast approach feels, in some fundamental way, out of balance.
Read more

"Because the other roles are double-cast, the different stories would seem to complement each other. But do they? To apply a criticism that Sandra lodges against Malik's paper comparing the institution of slavery to Black workers in corporate America, the play 'fails to draw an effective parallel.' I spent a good deal of intellectual energy, for example, trying to understand the connections between the plantation and the American university. The play has a great deal of humor, and, indeed, the farcical elements make the trenchant message more palatable. Regrettably, this has the collateral effect of undercutting the urgency of the drama."
Read more

"4/5 stars...Morisseau’s satisfyingly troubling play takes place in two sometimes overlapping periods...For the most part, the playwright forcibly goes to the heart of racism and its white supremacist roots. Occasionally, she interrupts her committed pursuits for laughs...Directing all scenes as surely as Morisseau wants them treated, Stori Ayers commands an excellent cast and thereby presents an excellent dramatic treatise on a never-ending American crisis."
Read more

Dominique Morisseau’s Confederates, the second play of her Signature Theatre Residency 5, is a clever, but overly talky dissertation on race, power and family. She offers the audience parallel stories alternating between the Civil War era and modern day academia.
Read more