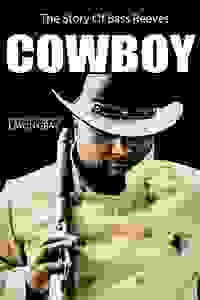 A western drama about the life of the man who inspired The Lone Ranger.

From Layon Gray, the writer of Black Angels Over Tuskegee, Cowboy is the first full on western to come to a New York stage in nearly 80 years.

Once regarded as the greatest of U.S. Deputy Marshals, many scholars believe that Bass Reeve's life served as inspiration for the character of the Lone Ranger.

Set in 1888 Oklahoma Indian territory, this show follows Bass Reeves and his Native American companion as they seek out two criminals fleeing to the Mexican border, one of whom Reeves has a death warrant for. But soon, they find themselves stuck in an old saloon as a deadly tornado slowly approaches.

See it if If you like a western play. Nice lighting and sound.

Don't see it if Plot goes in to many directions. Play talks at you in a preaching way.

See it if you like western themed action on a small stage in a story with a few twists, good costumes, sound and lighting and mostly good acting.

Don't see it if you are bothered by too much haze, gunshots, thunder & lightning or some hard to understand dialogue due to projection or background sound.

See it if you like westerns with cowboys, Indians, slavery, marshalls, and a soap opera twist, full of gunplay & speeches, all while a tornado looms

Don't see it if you think having so many plot lines would make a play lose focus from time to time, or prefer less serious topics, or hate hearing gunshots

See it if Interested in history and the consequences of slavery on later life.

Don't see it if Supported the Temperance Movement

See it if A real western. Alot of action, and storytelling. This is the best play about cowboys I have seen. Very intense action with lots of twists

Don't see it if If you dont like intense story lines, gunfire, mystery and lots of action. Read more

See it if How powerful the actors are.

Don't see it if There's nothing negative i can say

See it if You like an excellent story with twists and turns. My son and I was in the edges of our seats. Brilliant.

Don't see it if You don’t like complexed stories. You have to pay attention to all the action. An old fashion western Read more