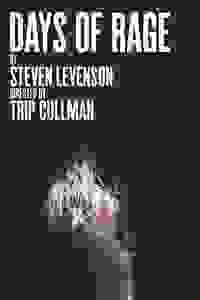 Centering on a group of young revolutionaries, Second Stage's new, 1969-set drama is a play about means and ends, ideals and extremes, and the perils of changing the world.

Against the backdrop of an endless, unwinnable war raging halfway across the world, and a polarizing president recklessly stoking the flames of racist backlash at home – a generation of young people rises up to demand change from a corrupt political establishment. It is October, 1969 and unbeknownst to the rest of the world, three 20-something radicals are busy planning the impending revolution from a quiet college town in Upstate New York. But when two strangers appear, disrupting the group’s delicate balance, new dangers and old wounds threaten to tear the collective apart. Written by Steven Levenson, the Tony Award-winning writer of "Dear Evan Hansen."

See it if You have memories of or want an idea of what it was like to live as a passionate youth during the turbulent Vietnam War era.

Don't see it if You don’t like to be reminded that there were (and are) reasons to be angry with the way our country is being run. Read more

See it if An interesting show despite an unremarkable story. Levenson’s script stars and performances are solid. Went by quickly.

Don't see it if You don’t like shows about the Vietnam era or can’t relate to the blind naïveté of youth.

“In some ways, Levenson’s disappointing play ‘Days of Rage’, is that good story, except turned inside out...The clash between heavy-handed satire and naturalistic conflict leaves ‘Days of Rage’ in a tonal muddle Levenson can’t resolve. The sexual turn that provides closure to many of the scenes begins to seem like a tic, and when that pales, the only option left is a generalized hysteria. At least the hysteria is effectively staged. The director Trip Cullman gets all the tempos right.”
Read more

"The play quickly gets repetitive, and Levenson’s work lacks both period specificity and an ending. A perfect staging might paper over the gaps, but director Trip Cullman largely miscasts it and...delivers a production without a particle of sexual heat...The details of the play are so unconvincing and the characters’ choices so baffling that we can’t believe they’re realistically sitting on the couch, let alone showing us the true face of progressive hypocrisy.”
Read more

“A slick piece of work, a little too calculated...I left it feeling like I had just watched a careful balancing act, a story that skirted having too much of an opinion...There’s an undertone of superiority...While I respect the play’s implication that there will never be one revolution to end all revolutions—I question the neatness of its structure and the ease with which we’re able to write off the immaturity of its central characters.”
Read more

“It's hard to make out what the playwright is trying to say with this lighthearted work trafficking in serious themes...It all feels like counterculture-lite, hardly anything to rage about. Cullman's assured direction makes the piece, flaws and all, occasionally enjoyable, and under his guidance the young performers deliver amusing turns. 'Days of Rage' is reasonably entertaining for much of its running time, but it could have been so much more."
Read more

“This mildly funny satire of 1960s radicalism is now enjoying a lavish production...It's impressive to behold, but it all feels a bit too grand for the story being told...Cullman milks plenty of laughs from the script, but very little dramatic tension. He compensates with high production values...Overproduced and underwhelming, ‘Days of Rage’ is an incredulous snort at boomer idealism from those of us who are living with the consequences 50 years later.”
Read more

“Levenson's smugly derisive tone, combined with his inability to give anyone...a single interesting character trait, causes ‘Days of Rage’ to be dead on arrival...’Days of Rage’ feels like it was written after he saw a number of bad movies about the era. The single touching moment comes at the end, with a flash-forward sequence that reveals the future of each character. Only at the very last second does he grant them a modicum of grace.”
Read more

“The playwright has built a mostly intriguing play but on an infirm foundation...You might walk into ‘Days of Rage’ with high expectations. In my case, these expectations were quickly dashed...So go along with Levenson back to the late-’60s, if you will. I didn’t buy it, alas. In fact, I walked out thinking it was time to look at Michael Weller’s ‘Moonchildren’, a play captured the times and the attitudes with brio and fervor lacking from the present attempt.”
Read more

“Absorbing, funny, and problematic...Under Cullman’s brisk direction the other actors are similarly well-matched...In presenting Levenson’s would-be revolutionaries smartly, with a full heart and on their own terms, rather than as symbols or forebears of future challenges, the playwright has given us something that feels fresh and vital—without sidestepping the sad, unavoidable parallels between ‘Days of Rage’s’ divisive times and our own.”
Read more

"As proven elsewhere, Steven Levenson is expert at depicting young people in crisis on stage. 'Days of Rage' is very real in its handling of a group of people of similar beliefs living together who have forces that are driving them apart, and as such it is engrossing and intriguing. However, the play's theme seems to be rather opaque or at least vague in its depiction of college-age radicals at the height of the Vietnam War. While some of the characters are thinly drawn."
Read more

“Levenson’s murky comedy turns out to be a satire of the sixties, but that’s not initially clear. His jibes at the counterculture are too few and too faint. Eventually they gain traction but it’s too little, too late...A director is limited by the material he or she is given but sometimes can transcend it by directing outside the box. That doesn’t happen here...More pronounced visuals might have helped ‘Days of Rage’ find itself onstage.”
Read more

"A round of applause to Trip Cullman for zipping us through all those scenes— some so talky that they seem longer, some more tense and dramatic...The play's thus enraged young activists are so emotionally messed up, foolish, rigid and incompetent that it's hard to take them seriously. This sends the play see-sawing between satire and seriousness...All this chaos as smoothly directed by Mr. Cullman is intermittently entertaining."
Read more

"Trip Cullman’s direction stands out, especially during the quick paced transitions...The cast is stellar and the characters are well drawn out...If you don’t have great leadership and a clarity of purpose, most rebellions at best become a voice for insecurities and desperate desire for attention and at worst land up being misguided escapades. This to me is the message of 'Days of Rage.' And it is delivered with such gusto and force that you are left asking for more."
Read more

“Rooms full of missed opportunities sprawl across Second Stage...Unfortunately, the subplots do more to dilute the impact of ‘Days of Rage’ than to strengthen it...The cast is uniformly excellent. They develop their characters and their characters’ conflicts with authenticity. Mr. Levenson’s themes succeed in challenging the audience’s complacency; however, the Vietnam tropes (napalm, bombs, political chicanery, etc.) could have been more fully developed."
Read more

"One is ultimately left perplexed primarily by Levenson's intention in writing the piece. Is it somehow meant to remind us that 50 years later, we still need to try to fight injustice in the world, or is it a cautionary tale that doing so often leads to little result, other than perhaps death. I couldn't say."
Read more

"Watching the kids in 'Days of Rage' behave as naively as they do, regardless of the sincerity of their beliefs, made me feel that Levenson, too young to have been around in 1969, had conjured up an ersatz, even tongue-in-cheek, vision of clueless, counter-cultural revolutionaries. My plus-one, though,…had a…different take…Himself an activist…he couldn't refrain from an emotional outpouring of how precisely accurate…everything in it is…In the face of this onslaught…I was forced to submit."
Read more

“It’s a story that starts slow but builds up steam as it progresses. The young actors are very good. I wish we received more back story on each character. My essential problem with the play is that I could not figure out the playwright’s point of view. I didn’t know whether his attitude toward the characters was satirical, cautionary or simply observational. I found it entertaining, increasingly involving but not very informative...Cullman’s direction is assured.”
Read more

“Levenson is a little too eager to expose what Spence, Peggy and Quinn will become, not to mention what’s really cooking inside their middle-class brains in October 1969. The playwright keeps pulling the Marxist playbook out from under them, and their actions and words, while often amusing, have little consequence...Cullman directs an accomplished ensemble, and Faist manages to reveal a few genuine moments of commitment to the cause."
Read more

"It’s apparent that Levenson wants to look at the different kinds of people who were drawn to political activism in the Sixties. But he makes the ones here too one-dimensional...Adding insult to injury, Levenson can’t seem to resist making fun of them. The early scenes come off like a Spinal Tap-style spoof...Cullman's frenetic direction doesn't help...There are some enjoyable moments...The rest of the play moves less convincingly back and forth between slapstick and melodrama."
Read more

"‘Days of Rage’ is a disappointing and confusing play...Levenson’s play too often renders its characters as cloying cartoons, painfully lacking in self-awareness and overflowing with self-righteousness. Nothing about the play reads as authentically capturing the spirit of the time, and the tone is mostly satire...We have enough days of rage in our present to visit with; skip these ones from the past.”
Read more

“It begins with an explosion of angry rock music that lets us know the play is not misnamed...Five mismatched characters, each arriving at their current states of conviction from different backgrounds, are the ingredients that furnish playwright Levenson’s play with the engine that keeps it moving at top speed through a totally absorbing ninety minutes...Levenson’s words capture the period in which his story unfolds...’Days of Rage’ now joins a robust list of excellent plays.”
Read more

"It’s sport to watch the Left be hoist with its own petard in 'Days of Rage,' an acutely observed play...'Days of Rage' has been sitting on the shelf for a few years but is being staged now, with tight direction by Cullman, because Levenson has made a name for himself and because the play is suddenly if obliquely timely: It’s a sharply funny commentary on a period when young people are getting the socialist itch again, becoming increasingly marchy and shouty in the process."
Read more

"Fast-paced and hilarious...Levenson’s powerful play focuses a sharp gaze at politics and the hidden volatility that can tip over into violence and the spilling of blood...The timing and ensemble work of the actors is flawless...Levenson writes with great clarity about the fundamental unclarity of the human situation...The year 1969 is a window into our fraught times, and Levenson uses it just as Arthur Miller used the Salem witch trials to focus his unsparing gaze on the McCarthy years."
Read more