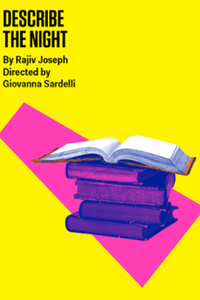 Set in Russia over the course of 90 years, the Atlantic's new epic drama from Rajiv Joseph ('Guards at the Taj') traces the stories of seven men and women connected by history, myth, and conspiracy theories.

In 1920, the Russian writer Isaac Babel wanders the countryside with the Red Cavalry. Seventy years later, a mysterious KGB agent spies on a woman in Dresden and falls in love. In 2010, an aircraft carrying most of the Polish government crashes in the Russian city of Smolensk.

See it if You like well acted and staged plays. It’s long but the complex plot keeps things moving well.

Don't see it if Russian history as a backdrop would bore you or you don’t like political dramas/thrillers.

See it if Characters and events intertwine from four different periods in Russian history. Only bits of truth remain, and even those are questioned.

Don't see it if You don’t enjoy piecing together fragments of a non-linear story. Intellectually challenging with a mean villain, but not emotionally moving

See it if Epic, ambitious & talent stretching effort by Joseph to chart the reach of Stalinistic policies into modern society esp 'fake news'

See it if You’d love a sprawling, epic, everything-is-connected work of historical fiction that makes you want to read more about the play’s events.

Don't see it if You dislike heady plays that bounce around between different time periods and make you feel unsure of if you’re following the plot.

See it if you like historical stories with some spices thrown in; truth or dare situations and great acting by all, especially Tina Benko.

Don't see it if you don't like long plays or political history with mystery; you don't like bits of embellishment thrown into your non fiction; poor ending.

See it if you enjoy historical dramas even if they are mixed with a pinch of fiction. A wonderful show-stealing performance by Tina Benko.

Don't see it if you can't sit still for three hours. Or if you do not like historical plays not told in chronological order. Read more

See it if KBG spies, Polish government crashes, and a mysterious diary story-line interest you.

Don't see it if you are already overwhelmed by the Trump presidency’s connection to present day Russia. Read more

See it if You want to see a fascinating historical drama that follows a compelling story over 90 years.

“A frankly tiresome play...Joseph's comedy wilts rather than blossoms in proximity to his tragedy, and his tragedy droops into bathos. The production, directed by Giovanna Sardelli, is no help...The root problem is that the characters are mere conveniences, bent like pipe cleaners into the shapes required by the overbearing plot. You spend a lot of time wondering if they are real — to history, that is — but none wondering if they are true. All too evidently, and disastrously, they are not."
Read more

“Ambitiously complex…In a nearly three-hour play, it's impressive that Joseph keeps everything spinning almost to the very end. What's missing, though, is a sense that there's a center to the whirlwind. What idea, other than ‘fiction exists,’ is all this historical flotsam whizzing around?...Still, it’s a pleasure that someone has finally figured out to fully exploit Tina Benko's talents...'Let me tell you a story,' the ancient Yevgenia creaks...And as long as she's telling it, it’s riveting.”
Read more

“Dense and fascinating...A play about stories, one that begins in historical fact and spins outward...'Describe the Night' eels like a vital attempt to hold a mirror up to the former Soviet Union — in Joseph’s case, as an American playwright, a mirror in which we might also see ourselves...Intelligent, playful performances...The genius of ‘Describe the Night’ is its recognition of the intellectual overlap between Russia’s creators and its tyrants: both understand the power of story.”
Read more

“No shortage of imagination. But, it lacks the emotional resonance to make us sufficiently care about its characters...The playwright doesn't succeed at blending his wildly different stylistic tones and narrative lurches with sufficient finesse. For every scene that crackles with dramatic tension, there's another that quickly lapses into tedium. The links between the characters and the complicated series of events depicted often prove frustratingly elusive to decipher."
Read more

“Ambitious, uneven and hard-to-describe...An intriguing but too-often confounding play...The writer gives his historically set storytelling a heightened imaginative lift. But often the changes in style are just too odd to fathom, coincidences are too much of a stretch...Sardelli directs with a wide and careless brush...The actors do their best to shift playing styles, but often the comic moments — and even some of the dramatic ones — are played so broad as not to be believed at all."
Read more

“An ambitious but anemic drama...Puzzle pieces eventually all snap together as the dramatic mash-up explores the weight of history, the slipperiness of truth and the power of connections...Performances run the gamut from convincing to cartoonish under the direction of Sardelli. When all is said and done, the nearly three-hour play lacks a cumulative punch. Describe the 'Night' — intriguing, long, and low-impact."
Read more

“The kind of historical revisionism that is thrilling onstage, but deadly in government...Earnest performances are a key ingredient in the magical realism that Joseph and Sardelli impressively sustain for nearly three hours...An arresting production that often makes us feel like we're in a Russian theater...Much more than an engrossing tall tale...It heroically wrestles with the slippery nature of truth itself, and unnervingly demonstrates why its alternatives are so seductive.”
Read more

"We'd be more intrigued if the people onstage were more engaging...Then again, playwriting of this breadth and intellectual interest doesn't come along every day...There is considerable satisfaction to be had as the various puzzle pieces click into place...Even when the play is taking its own sweet time, one can enjoy a cast that is adept at hopscotching across the decades...There are the seeds of a more powerful play inside 'Describe the Night,' but, still, it's a risky, rangy work."
Read more