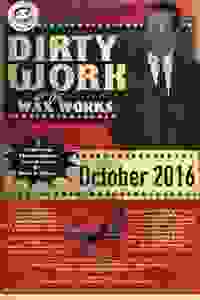 Dirty Work at the Wax Works NYC Reviews and Tickets

Be warned: Audiences who take this after-hours, crack-pipe smoking, hallucinogenic tour though the Hall of Presidents will be exposed to excessive swearing and encounter graphic violence, including a shooting gallery reenactment of the Kennedy assassination, zombies eating Richard Nixon's brain, and a funeral interrupted by a booger hanging off of George Washington's nose. No one under 10 admitted, and those ages 11 to 15 must be accompanied by an adult.