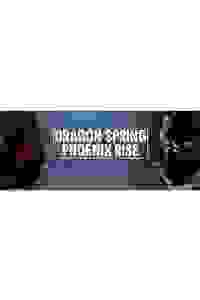 The Shed's world-premiere kung-fu musical tells the story of a secret sect in Flushing, Queens, that possesses the magical power to extend human life, and the twin brother and sister caught in the struggle to control it.

Directed by Chen Shi-Zheng and written by Kung Fu Panda’s Jonathan Aibel and Glenn Berger,  "Dragon Spring Phoenix Rise" features songs by Sia remixed by The Haxan Cloak and Venezuelan artist and producer Arca, and choreography by Akram Khan. Fast-paced martial arts combat and balletic dance sequences unfold in front of, around, and above the audience in this original production designed specifically for the soaring, flexible space of The McCourt.

Don't see it if u expect to see accomplished actors or adept singers; you want a show with coherence, wit, novelty, subtlety, intelligence or profundity. Read more

See it if You want to visit a new venue and see a work that makes use of a big space.

Don't see it if You’re expecting a musical and/or Kung Fu. This is completely mismarketed. It’s basically a dance & light show. Acting is high-school level.

See it if you’re curious about seeing a show at The Shed.

Don't see it if you need your shows to have good writing or good acting. And with just three songs this is barely a musical.

See it if you enjoy beautiful choreography with emphasis on martial arts; dancers are wonderful & mesmerizing. The score is high for their benefit.

Don't see it if Certainly not a typical play or performance. Would be better strictly as a dance piece with no speaking or singing. Choreography is enough Read more

See it if your mushrooms are about to kick in and you can ignore everything else that is happening and just stare at the really cool light show.

Don't see it if I actually think everyone should see this to appreciate how good other shows are.

See it if you like Vegas or Cirque de Soleil style flashiness and acrobatics. The set is really striking. Lots of cool kung fu style moves.

Don't see it if you want a moving story - it is just so cheesy. Also, poor singing is unacceptable. This is a bad start for the Shed.

See it if You want to see a new performance space.

Don't see it if You want a complex or interesting story.

"The show’s mismatched creators — apparently assembled by random spins of a Rolodex — call the result a kung fu musical. I can report that what the director Chen Shi-Zheng and the 'Kung Fu Panda' writing team of Jonathan Aibel and Glenn Berger have come up with does involve martial arts and tonal sounds. But to the extent kung fu usually provides thrills, and musicals usually tell stories through song, the new genre is a misnomer if not an outright lie."
Read more

★ "A ludicrously awful dud assembled by a coterie of international artists who seem to have collaborated via Google Translate. The leads can’t sing, the fights are lackluster, and the highly touted aerial sequences are done in slo-mo, so the only danger is that you’ll fall asleep."
Read more

"★ The latest commissioned endeavor in the Hudson Yards arts space is an incredible mishmash of martial arts, pop songs, and a silly story"
Read more

"Sometimes you don't need a long, complex story - or even an engaging one - to hook an audience. At the showing of 'Dragon Spring Phoenix Rise' at The Shed that I attended, audiences clapped and hooted for heroes and villains alike, despite being given no logical reason to do so. The heroes and villains possessed no distinguishing character traits, other than differing accents, and they voiced no discernible reasons to be fighting. The fighting was just that awesome."
Read more

"A lot to take in. The internationally renowned director Chen Shi-Zheng and his collaborators want to serve up the theatricality of Cirque du Soleil, offer a display of martial arts that honors the legacy of Bruce Lee, and create a tale of family and morality that appeals to all ages that combines the sincerity and pathos of a Broadway musical. As it sounds, this is a tall order, and while the show succeeds in achieving some of its goals, it often remains frustratingly earthbound."
Read more

..too long, too confusing, in places tedious, in other places overwrought and even creepy…its songs are paltry and its underscoring persistently annoying ... HOWEVER, amid the awfulness there are a scattering of impressive moments — of visual splendor, awesome stagecraft, and exciting dance and martial arts choreography… enough of them to make me glad that I can say I saw this first theatrical spectacle in The Shed’s inaugural season.
Read more

"A stage that pools with water and floor traps bursting into flames can't fix an artistically disparate 'Dragon Spring Phoenix Rise' at The Shed. The venue is still in its infancy, like a baby screaming to be fed. But with any new parent, what goes in the bottle is up for debate."
Read more