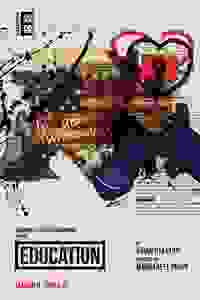 59E59 presents this explosive new play about free speech, the dangers of polarization, and using art as a means for change.

A high school senior is suspended when he tries to burn an American flag for a school art fair project. Undeterred, he conspires with his classmate, a slam poet in trouble for an expletive-laden poem, to enter a controversial new piece, setting off a free speech firestorm in a small Ohio town. 'Education' is a provocative new play about two young people who fight for their right to express themselves in a society hostile to and fearful of change.

See it if winning; many sharp/witty scenes in which school establishment, religious zealots get their comeuppance; appealing tale young rebels in love

See it if Want a completely of-the-moment work that references ALL the hot-button issues. Play attempts to present arguments from both sides.

“Hard to locate any actual conflicts…Mostly these characters talk over and around each other, quibbling over semantics instead of articulating ideas. A lot of the dialogue is forgettable...The words themselves wouldn’t matter so much if the play and the arguments that undergird it were more credible…Outside the theater, real-life teenagers are organizing behind a political movement that is coherent in its aims and persuasive in its message. I don’t think they’d recognize themselves here.”
Read more

"The best stage rants are targeted and precise...By aiming at every target, Mick's rant hits none of them - and this gives us a pretty good indication of the direction of the rest of the play....Perry's production does little to enhance a predictable script...Although Perry's unimaginative staging mostly has the actors gesturing and moving forward on each line, exciting performances do occasionally escape her clutches...We learn almost nothing from 'Education', and feel even less."
Read more

"Showcases Dykstra's talent for composing rants. Time and again, the characters in his provocative, if overloaded, drama spout off, furiously and eloquently...One's initial delight fades as the characters are overtaken by speechmaking...'Education' isn't really a success, but it's the work of a playwright who is willing to take on all sides of an argument, sending it spinning in all directions and the hell with the consequences. And his strong words can seem like a revivifying blast of fresh air."
Read more

“‘Education,’ Brian Dykstra's new play, is an incendiary investigation into censorship, free speech and responsibility in electric theater. It purports to be about Art as a Weapon but its themes go much further than that. The protagonist Mick, a biracial 17-year-old high school senior, has a rant that list all the things wrong with American society at this time which is simply scorching. All high school students should be so articulate.”
Read more

"The conversation grabs attention from the moment the lights come up...What doesn't work is Mick and Bekka as a believable devoted couple. There is simply no chemistry between Jones and West...The script is close to flawless with flowing dialogue and wonderfully developed characters...Teenage audience members are sure to relate to the pressures and responsibilities...Adults will recognize the many ways art has been used as an effective weapon in the last few decades."
Read more

"Pushes a lot of hot buttons but the play itself very rarely ignites…There's plenty of potential here for a spirited discussion drama… However, not only is there too much to digest, Dykstra's overly contrived dramaturgy deprives the issues of characters and situations believable enough to warrant us making more than a shallow investment in their problems…There's a feeling of schematic contrivance behind every scene and debate, with the characters more strawmen and women than human beings."
Read more

"'Education' is a clever, passionate, and engaging discussion on the helpless frustration of needing to make a stand; however, while it definitely wants to educate its audience, it slips into the trap of many who are convinced of what they have to say – being too proud of its own cleverness...'Education’s' language occasionally gets caught up in itself, as though the characters are speaking past each other...Yet as the show progresses past these small pitfalls...the show finds its rhythm."
Read more