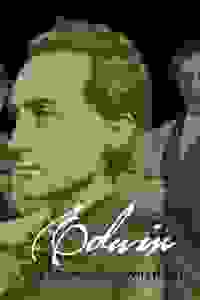 Edwin, The Story of Edwin Booth NYC Reviews and Tickets

Edwin Booth was the finest American Shakespearean actor of his day, however, his triumphs were marred by tragedy. Eight months after his brother murdered Abraham Lincoln, Booth returned to the stage, braving death threats and public outrage. 'Edwin, The Story of Edwin Booth' takes us backstage on that fateful night, revealing the private grief of a man struggling to redeem his family’s name.

See it if you're a history buff, perhaps. I had high hopes at the beginning, but we all had trouble hearing some of the most crucial words, so...

Don't see it if You have no interest in this theatrically significant personage. He gave his house to the Players' club--nice guy, despite his brother.

See it if if you like historical dramas and you like learning interesting facts about famous people.

Don't see it if you don't like real slow moving shows with unmemorable songs.

See it if you like a musical about historical events told with beautiful and intelligent lyrics, and music, and interspaced with Shakespeare’s words.

Don't see it if you do not like substantive musicals

See it if like Shakespeare, wonderful music and singing, interested theatrical history, great acting, and a historical dysfunctional family

Don't see it if you dislike Shakespeare, don't like musicals and aren't into historical drama. Read more

See it if you enjoy history

Don't see it if you want historical accuracy

See it if You're a historoan

Don't see it if You can't think

See it if You want to know more about the Booth family's behind-the-scenes struggles and their celebrity status in the 19th century.

Don't see it if you aren't prepared for some light innuendo, people hurting the ones they love, and tragedy as well as comedy. No wheelchair access venue

"Swanson and Rosett configure the many-layered story of Edwin Booth ingeniously using a seamlessly crafted, organic structure...Rosett, Swanson and the superlative cast engage us with moment-to-moment truthfulness...I absolutely adored this profoundly brilliant production. Under the power of Christopher Scott’s expertly realized, detailed direction, the production and all of the designers’ attendant elements adhere to create a scintillating elucidation of an amazing man and his family."
Read more

“The show...is an earnest attempt to wring some drama from Booth’s trepidation about what to expect from the public in the wake of his brother’s act, but the result is a talkative, tedious, two and a half hour exercise whose most interesting dramatic moment...comes a few minutes before the final curtain...It does little, however, to salvage a work burdened...with a drearily generic and derivative score and a dramatic treatment that’s more flatline than arc.”
Read more

"Nothing can truly save this musical...Scott’s direction is all over the map. Swanson tries to incorporate Shakespeare’s themes with Edwin’s life and it does not work. It is difficult to follow, seems wordy and pretentious. In the end I spent about three hours researching things that befuddled my mind and found that much more interesting. Edwin Booth deserves a good play or even a musical, but this is not it."
Read more

"The choice not to make John Wilkes Booth the nucleus of the piece is inspired. Illuminating and entertaining, 'Edwin' delivers a real feeling for life tethered to the theater as well as a family portrait. It also has a whiz-bang ending. But, beginning with its length, there are issues...Dana Watkins is alas the weak link here...The strongest creative contribution comes from librettist and lyricist Eric Swanson...His tone is literate, and mercifully lacking in contemporary vernacular."
Read more

"While the sound fit the story, the lyrics from Swanson were sloppily predictable. And many times they pulled focus for being a tad cheesy...Director Christopher Scott offered some sloppy staging...'Edwin' looked like a well-polished production but the material felt like a first draft. There was much to be desired yet an abundance of fluff that needs to be axed...Booth’s story is one worth telling. Perhaps just not in this current format."
Read more

"The imagined memory play–filled with quotations and scenes from the Bard’s canon and passages of exhaustive facts about Booth and his dysfunctional family of actors, alcoholics, and enablers–too often comes across as a prized research project, an exercise in pedantry, or a dry historical biography, rather than a tightly focused dramatic musical. While the concept is compelling, there could be fewer 'words, words, words'...'Edwin's' cast of seven excels in the ensemble vocals."
Read more

"Instead of drama we get various conflicts that go nowhere because they all happened in the past and have little to do with the present situation...What we see is talented performers doing their best in the wrong play. There’s also a score with lots of songs that seem like little more than afterthoughts...Surely there is a story to be told about the great tragedian who was witness to and somehow involved with one of this country’s greatest tragedies. But that story is not served by 'Edwin.'"
Read more

"The historical setting of the lives of the musical’s characters radiate drama that this new musical has yet successfully to hone…There are genuinely moving moments in this production…And there are many times that this often luscious piece feels without clear focus or too many perspectives presented…This history is rich, the characters are endlessly fascinating, and the structural frame here feels unnecessarily twee at moments."
Read more