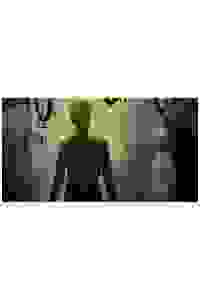 Irish Repertory Theatre revives Eugene O’Neill’s groundbreaking play about the rise and fall of Brutus Jones, a despot who ascends the throne using lies, intimidation, and the politics of fear.

After breaking out of prison in the U.S., Jones sets himself up as monarch of a Caribbean island. When the Natives rebel after years of exploitation, Jones' journey into darkness becomes a terrifying psychological portrayal of power, fear, and madness. With his demons in heavy pursuit, the Emperor is forced to confront not only the mortal sins of his past but also the depravities against his ancestors—all in search of forgiveness and salvation. Irish Rep last mounted this classic but controversial play in 2009. This production features the same director and designers but a new cast.

See it if you like O'Neill's character studies. Obili is great as TEJ. The highly creative staging is fascinating, altho the story line gets weird.

Don't see it if you dislike fantasy staging. I preferred the first half's realism. Frequent use of "n" word feels wrong. But despot dethroned resonates!

See it if Haunting, visceral staging of the emperor's demise using menacing life-sized puppets as the ghosts. Beliefs, power, and magic rule.

Don't see it if You prefer material that is easier to understand and analyze. You don't like artistic hallucinatory dance scenes. Read more

See it if a magnificently staged classic appeals to you. Puppets, lighting & music create a magical jungle world in which truth becomes justice.

Don't see it if you are looking for complex characters or plot.

See it if you enjoy great theater, wonderful set and lighting and effective use of puppets.

Don't see it if you enjoy comedy or a happy ending.

See it if Raw, early O'Neill still has the power to shock & this production proves it Great staging & Abili's exceptional work as Brutus packs a punch

See it if you're interested in an atypical play by O'Neill and witnessing a man's descent into madness. Great acting by Obi Abili, great direction.

Don't see it if you're looking for a whimsical night of theater; you dislike experimental theater and/or the use of masks and puppetry.

See it if You want to see an innovative, experimental take on a classic play, you have some knowledge of O'Neill and its controversial story.

Don't see it if You have trouble understanding accents and patois, are uncomfortable w subject matter, don't like the use of puppets/dance, want light fare. Read more

See it if you like O'Neill. Obi Abili is amazing as a tyrant who falls from grace through a roller coaster of emotions, including anger and pride.

Don't see it if you need someone to explain the action to you if a play is not clearly laid out beginning to end; are bothered by racist terms Read more

"A gorgeous, astonishing production...Both ferocious and blindsidingly affecting with Abili in the title role...'The Emperor Jones' is encrusted by its own time, with dialect that reads like racial caricature and sometimes cringe-worthy stage directions...O’Reilly’s lucid fever dream of a production shrugs off that grime, putting at its center a performance of such assured intelligence that there’s no possibility of condescension. Boundary-pushing in its day, the play still has plenty to say."
Read more

“Abili’s bravura performance doesn’t come off as ‘bravura’ and has no cheap flourishes...O’Neill was considerably influenced by the argument made by the legendary stage designer Gordon Craig, in his book ‘The Theatre Advancing,’ that, in doing away with masks, pantomime, and dance, the theatre had lost its magic. O’Reilly throws all of that back in. The result is mostly cumbersome and ‘artisanal,’ but, in the end, this unconvincing backdrop serves to show us Abili’s performance in relief."
Read more

“A nightmarish and hauntingly beautiful production...A breathtaking experience for the senses...Barry McNabb's masterful choreography is mesmerizing...But it's Abili's performance that gives this production its raw power...Abili's performance and O'Reilly's production make clear that Brutus Jones is one of the great tragic figures of the theater...The racial and political anxieties that 'The Emperor Jones' explores are ripe for renewed discussion in our time.”
Read more

"Worth seeing for its assured style alone...Obi Abili delivers a performance that isn't easily shaken off...Despite the outsized emotions he must register, there's a precision to everything Abili does, a variety of shadings that reveal each scene to be another step in Jones' descent into madness and death...O'Neill's script is a weaponized comment on human cruelty, designed to make audiences feel uncomfortable, and, produced with passion and creativity as it is here, it continues to do so."
Read more

"Remains shockingly powerful and relevant in its methods of addressing its ancient ideas. All of this is on full view, too, in O'Reilly's arresting production...A journey that first feels like a leisurely stroll soon transforms into a heart-pounding marathon...The cast is no less than expert. But in embracing both Jones's humanity and total lack of it, Abili is truly superb...This version of 'The Emperor Jones' knows exactly what it is and what it needs to be. And we are all the richer for it."
Read more

"With Charlie Corcoran's flexible set turning the tiny stage of the Irish Rep into a looming tropical forest, and the smartly realized costumes of Antonia Ford-Roberts and Whitney Locher, and Bob Flanagan's masks and puppets transforming a cast of seven into a multitude of trees, ghostly presences and spirits, the five hundred or so square feet of this stage on West 22nd Street became a vividly haunted island in the West Indies, giving life to O'Neill's 1920 drama."
Read more

"What drives this highly expressionistic production is the charismatic Obi Abili as Emperor Jones, giving one of the most exciting performances on the New York stage this season...Abili has a commanding stage presence that keeps you utterly riveted throughout. He fills the tiny Irish Repertory Theatre with his explosive power...Director O’Reilly and his design team have dramatized Emperor Jones’ journey in powerful theatrical terms."
Read more

"Still breathtakingly original...It's hard to top Thompson's riveting performance...Obi Abili hasn't mastered the brutish Jones's dialect with quite the same crystal clear line delivery. However, his more physically focused interpretation is quite extraordinary and works well with this expressionistic presentation...The amazing puppets and the actors who inhabit them, as well as the costumes, atmospheric music and lighting are what makes this 'Emperor Jones' so special."
Read more