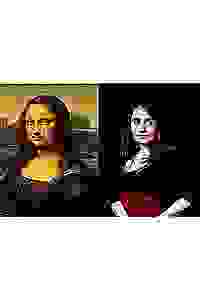 Equally Divine: The Real Story of the Mona Lisa NYC Reviews and Tickets

This new solo piece is a time-traveling, gender-bending drama about art, inspiration, and becoming who we are.

Winner of the 2019 United Solo Festival Best One-Woman Documentary Solo Show Award. Paris, 1911. The art heist of the century triggers a national manhunt. As police interview everyone from J.P. Morgan to Pablo Picasso, the story travels back in time to 1503, introducing us to the visionary artist Leonardo da Vinci, the apprentice who would become his lover, and the secrets behind the creation of La Giaconda. Along the way, the woman in the portrait solves mysteries that have baffled fans and stumped scholars for centuries: Why Leonardo never delivered the painting to the man who commissioned it. Who she is. And why she’s smiling.

See it if you want to see a wonderful story delightfully told and enacted.

Don't see it if I can't imagine anyone not enjoying this.