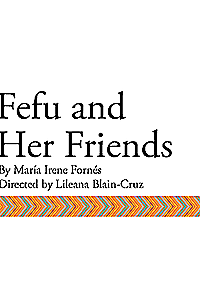 View in admin
Fefu and Her Friends
NYC: Brooklyn
81
Score it Scored!

Fefu and Her Friends NYC Reviews and Tickets

In this modern classic by María Irene Fornés, a group of articulate, idiosyncratic women gather in Fefu’s New England country house in 1935 to rehearse for a charity event.

Directed by two-time Obie Award winner Lileana Blain-Cruz, Fefu and Her Friends tells the story of a group of articulate, idiosyncratic women who gather in Fefu’s New England country house in 1935 to rehearse for a charity event. Their conversations evolve and become intimate dialogues and commentary on gender, sex, psychology and class.

See it if literally stepping into theater history excites you. An early experiment in interactive performance has been updated with multi-ethnic cast

Don't see it if you expect to nap in your seat. They make you get up to see three small scenes in intimate spaces! You leave with a lot to think about.

See it if shows women in 1935 terrified by men, w gun-toting Fefu @ center; scene of friend in bed voicing her paralyzing fears makes u shudder

See it if 8 intelligent but very different women gather to discuss their roles in a charity event, chatting & philosophizing with some surprising*

Don't see it if Want more of a plot and don't like avant-garde, surrealistic works or if movement is difficult.** Read more

See it if you enjoy a piece of avant garde theater that is as near to a normal play that one can get, great characters, costumes

See it if a more access Fornes play that is never done. all actors were excellent. staging is great and fun. audience is very much into this

Don't see it if like a simple definitive narrative. need to know the full story. some things are never answered.

See it if Why would you want to miss seeing this amazing avantgarde genius' show resurrected for 2019 in a fascinating​ dollhouse performance?

Don't see it if It's a wonderful cubic- no hexagonal show inverted and turned inside out and flipped around-- yet still tied up in a beautiful giftbox. Read more

75
Impenetrable monologues, Not for everyone, Avant-garde from the 70's, Intriguing

See it if You have curiosity about this rarely staged classic of the 70's underground.

Don't see it if You like plots, fully realized characters, staying in your seat, naturalism, and coherence. Read more

See it if you are interested in Fornes and her influence on experimental playwriting and feminist thought. You can see the "mother of the Avant-Garde"

Don't see it if you want to stay in your seat in the audience and watch a linear play. Not for those who want action rather than talky and intimate stories.

"While Fefu and Her Friends' is considered a feminist statement, in performance the play seems not to be very revealing about women or their positions other than the fact that the cast is entirely female."
Read more

"There are laughs, and love affairs, and a water fight, and a hunting gun, and much discourse on art. It feels like a Goethe tale that passes the Bechdel test… a thought-provoking triumph for director Lileana Blain-Cruz and the many personalities she and the ensemble have detailed."
Read more

"The Many Unusual Stages of ‘Fefu and Her Friends’: Read and studied for decades, a key work of the American avant-garde finally returns in a major New York revival."
Read more

4/5 Stars "A play can be like a symphony, rapturous in a way that surpasses logic. María Irene Fornés's ingenious Fefu and Her Friends is such a work, and this revival from director Lileana Blain-Cruz is nothing short of exquisite."
Read more

"The Wild Invention of 'Fefu and Her Friends,' and the (Latest!) Rewrite of 'A Bright Room Called Day'"
Read more

"'Fefu and Her Friends': Can Misogyny Exist in a Play Without Any Men?: Theatre for a New Audience stages the first off-Broadway revival of María Irene Fornés's masterwork."
Read more

"An evening of glitteringly arranged social chaos, in which high comedy keeps company with many darker undertones. Even at its most enigmatic, the richly allusive text provokes with its intimations regarding women, privilege, power, and sexuality."
Read more