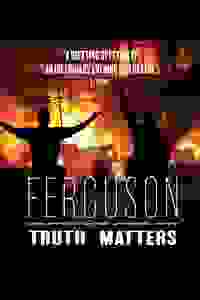 Theatre Verite Collective presents this new verbatim drama, a staged version of selections from the grand jury testimony in the case of the shooting death of Michael Brown.

Michael Brown's shooting by police officer Darren Wilson was one of the most controversial police shootings of recent years and led to the founding of the Black Lives Matter movement. However, the grand jury voted not to indict Wilson based on the sworn testimony of eyewitnesses. 'Ferguson' explores how this decision was made, based on the testimony the grand jury received.

See it if you enjoy courtroom dramas or want to learn more about this highly controversial trial.

Don't see it if you lean toward the left. This is a very conservative depiction of the trial with a specific political intent that many will not agree with. Read more

See it if You enjoy docudrama.

Don't see it if You want a neutral edit of the court proceedings.

See it if you want an unbiased presentation of the Ferguson shooting that sparked the "Black Lives Matter" movement.

Don't see it if you have a political agenda that leans towards the left, if you have your own opinion of current events and are un-swayed by "facts". Read more

See it if You are someone who likes facts and does not take a liberal view and gets offended when the facts are not on their side. I liked the show.

Don't see it if You are unreasonably liberal and overly sensitive.

See it if you want to know all the details of the trail and enjoy true-life event plays. It's a must see for everyone.

Don't see it if while thought provoking the direction could've better been laid out: less people on the stage during certain scenes & less jumping around.

See it if you're interested in trial reenactments in general or this case in particular, or if you enjoy seeing shows still in the development phase

Don't see it if you're looking for a polished show or if you are left-leaning. The show highlights a variety of perspectives but has a clear final message

See it if you want factual details regarding behind the grand jury decision not to indict the police in the Ferguson/Michael Brown tragedy.

Don't see it if want dramatic human interaction to gain insight into why the justice system and people make important decisions. You won't get that here.

Don't see it if if you are uncomfortable with race discussions

“The acting, directing and design are all competent...While there are some inherently riveting moments...it can feel at times like sitting through the tedious parts that 'Law and Order' leaves out...‘Ferguson’ could have looked more broadly into the significance of the confrontation and reaction to it for what it says about America...McAleer intends 'Ferguson' not just to debunk popular assumptions about the Brown killing but to discredit the entire movement."
Read more

"Members of the cast played their roles with impervious conviction, inciting an unyielding sense of resonation and sympathy...For anyone interested in seeing an incredible cast gaining a more objective scope on the misfortune of Michael Brown and ensuing injustices that follow, this play is definitely suitable."
Read more