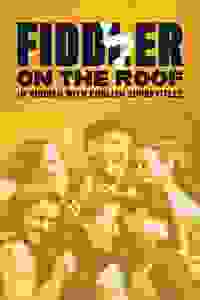 View in admin
Fiddler on the Roof (In Yiddish)
NYC: Midtown W
91
Score it Scored!

Fiddler on the Roof (In Yiddish) NYC Reviews and Tickets

Experience 'Fiddler on the Roof' in a new way – in Yiddish, the language of Tevye and his family. Oscar and Tony Award-winner Joel Grey directs this production, presented with English and Russian supertitles.

A New York Times Critics’ Pick, Fiddler on the Roof “strikes a deep emotional chord" and "offers a kind of authenticity no other American Fiddler ever has” (The New York Times).

With direction by Oscar and Tony Award®-winner Joel Grey, this production “speaks to us all” (Newsday). It has been hailed as "a richer, deeper interpretation” by The Wall Street Journal, "a mitzvah" by Time Out New York, and AM New York gives it four stars, calling Fiddler on the Roof "perfect."

Harold Prince, the legendary and original producer of Fiddler on the Roof on Broadway (1965 Winner of 9 Tony® Awards, including Best Musical) said, "If you have seen Fiddler before, you must see this production because it will make you feel you are seeing Fiddler for the first time.”

See it if You want to be moved by Theatre that has heart & soul & oodles of talent. Great acting, singing, staging, dancing. Beautifully done!

Don't see it if You’re antisemetic or believe there were good people on both sides in Charlottesville.

See it if You feel like you are in the town whereas the big Broadway show did not. Great singing, production.

See it if you'd enjoy a fine version in which the actors are young with fine dancing and singing all bringing the story a truer feel in Yiddish.

Don't see it if you do not know the story and cannot keep up with the subtitles or you cannot sit for a very long first act.

Don't see it if Given all the praise, I expected an epiphany. The show was fun but familiar. Distracting captions. Read more

See it if you'd like a joyous evening of familiar music and extraordinary dance. It is a window into a lost culture.

Don't see it if you are put off by having to read translations while watching a live production. You are not prepared for a long evening.

Don't see it if ur not willing to read subtitles; u seek lavish, extravagant staging & high production values; [I'm struggling for reasons not to see it.] Read more

See it if Fiddler is 1 of your favorites & want to experience it in Yiddish, curious how songs translate, encounter a new staging

Don't see it if You don't like Fiddler, you don't like reading supertitles, not a fan of musicals, don't like listening to foreign languages Read more

"The show has arrived with its stripped-down aesthetic and emotionally lucid production intact. In fact, it feels even more resonant... This may not be the most spectacularly sung, danced or designed 'Fiddler' ever to hit the stage, but it's likely the most authentic thanks to the use of Yiddish and the focus on genuine feelings. At times it's more like a séance than a show. The turn-of-the-20th-century village of Anatevka may be fictional, but its denizens feel wonderfully, vibrantly alive."
Read more

"Delivering raw emotionality, boisterous humor and cultural authenticity that will stir you whether you're experiencing the show for the first time or the 15th...Steven Skybell brings exuberant charm, warmth, flinty intelligence and even a bearish sexiness...Grey navigates the show's many shifts from comedy to pathos, from elation to fear and desolation, with a supple hand, and the heartfelt investment in the story and characters is evident throughout."
Read more

“Beautifully acted and sung...By way of an ancient language, a musical that has spent the last fifty years being produced regularly...is suddenly seen through a new lens...The impeccable cast is led by Skybell, a bearish Tevye of commanding strength and warm humility...There is very fine work among the supporting company...This is a heartwarming production of an enduring classic.”
Read more

“What originally came across as a solid, modestly scaled effort that drew much of its power from its choice of language and venue has matured into a ‘Fiddler on the Roof’ that can stand up to any I've seen. And yes, the Yiddish dialogue and lyrics imbue it with an authenticity that makes it unique...Skybell's Tevye is...superb...The use of Yiddish firmly anchors this production in the old-world, yet it is surely not lost on anyone in the audience that we live in a world of refugees."
Read more

"This production is very special indeed, endowed with a superabundance of strengths. If I were to narrow it down to one, it would be this: everyone involved absolutely respects the story that is being told, bringing out every bit of nuance that lies within Friedman's translation of Joseph Stein's English-language book...All told, director Joel Grey has given us a 'Fiddler' that is a towering labor of love, delivering the goods with heart, soul, and integrity."
Read more

"Seeing the iconic 1964 Joseph Stein–Jerry Bock–Sheldon Harnick musical performed in the characters’ original language simply feels right...Some things hardly need translation, such as the boisterous 'Lekhayim' ('To Life'). Or the delicate duet between Golde and Tevye, 'Libst Mikh, Sertse?' ('Do You Love Me?'), rendered with such tenderness by Babiak and Skybell—surely one of the best Tevyes to ever tug a milk cart."
Read more

"There’s a lot to smile at in this wonderful production...As gimmicks go, 'Fiddler' in Yiddish has a pretty good one...But this 'Fiddler' succeeds fully on its own merits. Grey’s interpretation of the classic is simple and moving, and he has assembled a fine cast of Yiddish-speaking (and Broadway-level-singing) performers...The Yiddish language places the piece even more firmly than usual in a specific place and time."
Read more

"It’s cannily and rhythmically, if not literally, true to the characters and predicaments of the Sholem Aleichem tales on which Joseph Stein, Jerry Bock and Sheldon Harnick built their folk musical...All this conspires to offer a 'Fiddler' unlike any you’ve seen before and promising, no matter how many times you’ve heard that luminous score, a fresh and joyful revisit...I object to Dan Moses Schreier’s over-amplification, which frequently wrecks the intimate scale of the proceedings."
Read more