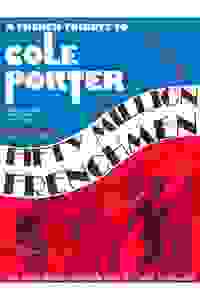 This 1929 Cole Porter musical offers a classic boy-meets-girl story set in the city of love. Part of "The Musicals in Mufti" series of minimally staged, script-in-hand productions of underappreciated Broadway musicals.

The year is 1929, the month is June. It's the season when all the Americans invade Paris--and all the Parisians leave town. This classic boy-meets-girl musical set in the city of love introduced the world to such memorable Cole Porter favorites as “You Do Something to Me,” “You’ve Got That Thing,” and “The Tale of the Oyster.”

Originally opening on Broadway in 1929, FIFTY MILLION FRENCHMEN was one of Porter’s earliest hits and a precursor to his success that was to come. Irving Berlin was such a fan that he took out an advertisement calling FIFTY MILLION FRENCHMEN “the best musical comedy I have seen in years!” The York is delighted to kick off its Cole Porter Mufti celebration with this show, in the revised version created by Tommy Krasker and Evans Haile (York's Executive Director) for the 1991 Cole Porter Centennial, downplaying the original’s lavish production and emphasizing its remarkable score.

See it if I enjoyed this early Cole Porter show, with its clever lyrics and feel-good fun. Impressive small production given just a week of rehearsal.

Don't see it if Some of the singers are much better than others. The story is a cliched “two young men make a bet on a girl” plot set in the 1920's. Read more

69
Quite the accomplishment for just 5 days of rehearsal, Great music, Disappointing, Dated, Cliched

See it if you're a Cole Porter fan & curious about this show, you enjoy the York's minimal Mufti stagings, you want to see what can be done in 5 days

Don't see it if you expect a large, fully-staged show or more modern plotting, want elaborate dancing, more than a 3-man combo or the feel of the original Read more

See it if Silly book draped around early Cole Porter score. Two pianos and a banjo made a nice sound. The male singers were weak.

Don't see it if The show's best song, "You Do Something To Me," was spoiled by feeble singing. It was fun to see and I'm grateful to experience this rarity

See it if you love American musicals and would like to see one of the early ones written by a true master. Or, if you like French-themed pieces --go!

Don't see it if The silly plots of early musicals bore you, or if you don't want to hear beautiful songs from the last century, or if you want more polish.

See it if you want to hear some great Cole Porter songs. I liked the 2 pianos and banjo accompaniment.

Don't see it if you're looking for more than bare-bones staging, as are all Mufti performances. Several singers lacked projection.

See it if you enjoy musicals that make you happy.

Don't see it if you do not enjoy plays where everything turns out perfect.

See it if you want an old fashion feel good musical with songs by Cole Porter and a happy ending.

Don't see it if you want a musical with elaborate stage settings and costumes; this is all about the music.

See it if You really are a Cole Porter fan and interested to see a pretty much never performed piece with some wonderful songs. A few talented singers

Don't see it if You are looking for a musically balanced show with talented performers and full production values. Read more

"As was always the case, the crossbreeding of Porter and Paris yields a harvest of double entendres, here delivered with brio by a pair of standout performers…..A must for Porter fans and students of vintage musicals."
Read more

"The 1929 hit is a whoop of joy from the late Jazz Age with one of Porter's sauciest, most impudent scores. And if the book, by Herbert Fields, isn't a humdinger, it doesn't overly get in the way of the fun, either. That said, this Mufti does screw a couple of things up."
Read more

"However, even after all these years the show is both entertaining and smart and offers a pleasant evening in the theater. Another plus is that it features a great many top-drawer Cole Porter songs that will be unfamiliar to most theatergoers."
Read more

"Kristy Cates, as an American tourist looking to be 'shocked' in Paris (that's literally the extent of her character development), runs away with the show…Porter's lyrics pop with their usual charm and occasional acerbity…most of the show feels snugly rooted in 1929."
Read more