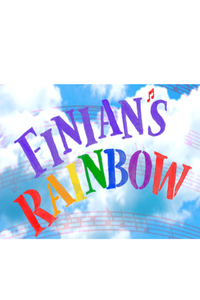 Irish Rep revives its adaptation of the classic E.Y. Harburg Burton Lane musical with Tony-nominee Melissa Errico reprising her role as Sharon. Hit songs include "Old Devil Moon" and "If This Isn't Love."

Equal parts romantic fairy tale and sociopolitical satire, this groundbreaking 1947 musical follows an Irishman who steals a feisty leprechaun’s pot of gold and escapes with his daughter, Sharon, to Missitucky, a mythical region in the United States that is part of the Jim Crow South. The daughter and the sprite each find love with others, but also encounter bigotry, economic disparity, and cultural injustice.

See it if Light hearted crooning 40's music, enthusiastic performances, race/class insights ahead of its time. Hopes and dreams for a better world.

Don't see it if Shallow characters, mostly ballads, not too dramatic. Good show for my parents but not my teenagers.

See it if the show is new to you, you're a fan of Melissa Errico, curious about staging on Irish Rep's small stage, you enjoy the score performed live

See it if Wonderful score by Burton/Harburg & both leads in excellent voice keeps this hokum afloat. Moore's streamlined script helps a bit

Don't see it if Even at a crisp 2 hrs. show still feels draggy ; clunky adaptation can hinder enjoyment but the music is incandescent

See it if want to see one of the best productions of the show in an intimate setting. Melissa Errico performs the same role that she did 12 years ago

Don't see it if costumes are your forte. Something seemed to be missing here.. Read more

See it if you're looking for something uplifting with a beautiful score and solid performances. Despite this show's age, it's surprisingly relevant.

Don't see it if you like dark, moody, or edgy material.

Don't see it if you want a coherent plot or a romantic one; did not feel the chemistry between the Sharon and Woody - Not due to Errico (see below) Read more

See it if You enjoy a well acted and sung musical. Very charming presentation.

Don't see it if You don't like musicals. This show is all about the music, the story line is sophomoric.

See it if You love this show. Melissa did this ten years or so ago and was better then although she still has a beautiful voice. If never saw her, go.

Don't see it if You love this show. Disappointing production. Melissa E lovely but too old for the part. No chemistry with leading man. She could be his mom Read more

"Ms. Errico is, if anything, even more persuasive as Sharon, an Irish lass newly arrived on American soil, than when I saw her in the role a dozen years ago...The score, by Burton Lane and E. Y. Harburg, is one of the most enduringly delicious ever concocted for an American musical. The book, by Mr. Harburg and Fred Saidy, is more perishable, a mix of high whimsy and topical satire...Ms. Moore has come up with a very companionable interpretation."
Read more

"Plotwise, it's sentimental blarney...The glorious songs—which make up most of the two-hour run time thanks to director Charlotte Moore's judicious book cuts—should win you over...The 13, un-amplfied cast members are in superb voice throughout...There's no denying that this is a modest mounting due to the company's budget and small stage...And yet, this seems to be the ideal way to experience 'Finian's' ample charms."
Read more

"So delightful that the run of the show has already been extended...Moore requested and received permission to drastically revise the show...All that’s left is its bare bones. This puts the score right where it belongs, at center stage, and it does so without destroying the dramatic continuity that’s needed to make the show cohere....You won’t hear better singing—or better songs—on any New York stage...All of the songs in the show make the strongest possible impression."
Read more

"Moore has fashioned a fleet, intimate (if occasionally disjointed) 2-hour version of the show, and the cast is charming. The star is Errico, who has a gorgeous voice and who previously partnered with Silverman in 'Passion.' They sing wonderfully, but the pairing is not as felicitous here...They struck me as mismatched and unsparked. I also wish Moore had deployed her fine actors with a little more attention to one another...Look at one another! You’re adorable!"
Read more

"If the trimmed book seems rather incoherent now, the glorious score, sung so beautifully here, more than makes up for any narrative shortcomings...While Harburg and Fred Saidy’s book deserves praise for its combination of whimsy and a socially responsible message, it’s also pretty convoluted. That likely explains why director Moore focused her attentions on the music...Each number is a thoroughly crafted gem...And the company, cast for their sublime voices, sing their hearts out."
Read more

"Moore captures the magic within Burton Lane, Yip Harburg, and Fred Saidy's 1947 classic with great immediacy...A scrappy affair that captures the heart and soul of the material without going over the top...Best of all, the compactness of this production allows the company to perform the matchless score unamplified...With Errico, Silverman, Grovey, and company front and center, sounding like a cast of 50 rather than 13, this 'Finian's Rainbow' is downright glorious."
Read more

"Each time the band strikes up at the Irish Rep, you can be sure something delightful is in store. The cast Moore has assembled is one of the most vocally gifted in town, led by Melissa Errico...Moore has cut the book to the bone...It's a dangerous, if audience-pleasing, approach; a show that originally barely made sense now borders on the incoherent...Moore hasn't really solved the problem of what to do with this infectious, often delightful, sometimes maddening show."
Read more

"A joyous, colorful revival...Watching Charlotte Moore's small-scale (13-actor) but big-hearted spin on this work, it's hard to care too much about the babblings of any nattering naysayers. This is, admittedly, mostly thanks to the score, which ranks as one of the very best ever composed for a Broadway musical...Its underlying story...is pretty hefty stuff...Traditional tropes are at play, of course...It still works when treated as honestly and forthrightly as Moore does here."
Read more