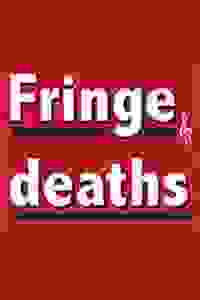 This fact-based script written by a former investigative reporter reveals the startling circumstances behind the deaths of these icons. Suicide? Murder? Misadventure? Learn the grim poignant secrets of these fringe deaths. For the first time, "Fringe Deaths" reveals the actual last moments, what really happened, to these tragic personalities. Did Reeves, hero to millions of kids, kill himself or was he murdered? Who killed beloved “Little Rascals” star Carl Switzer and why? What caused beautiful starlet Barbara Payton’s slide towards a seedy and early death?

See it if mini-bios interest you. The hard working cast doubles and triples to make this show happen.

Don't see it if you're not into short biographic plays with seemingly unrelated music. Likewise the subjects don't seem to have much in common beyond fame

See it if you want to experience a very unusual play about 4 people who die.Some of the acting is very good and the stories are both sad and amusing.

Don't see it if you want to keep your illusions about the characters of Alfalfa and Superman. Don't go if the subject of death disturbs you. Read more