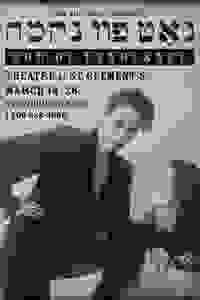 After a successful run at La MaMa earlier this season, New Yiddish Rep restages its revival of Sholem Asch's famously controversial play in its original Yiddish with a new director.

One of the most psychologically revealing plays of the early 20th century, and still highly incendiary due to its conflicted view of Judaism, 'God of Vengeance' inspired Paula Vogel's critically acclaimed 'Indecent.' The play is about a brothel owner's attempt to marry off his daughter and have her lead a dignified religious life, only to watch her drawn back into the life of sin in which she was raised. The show featured Broadway's first lesbian kiss, and many involved in that 1923 production were arrested for indecency. See what all the fuss was about! Performed in Yiddish with English supertitles.

See it if Powerful story, some great actors. Great segue to Indecent. Great to imagine how shocking the story was for 1907.

Don't see it if This is not the same production rated by the NY Times. It was a very simple, very low budget version. Supertitles can be a bit distracting.

See it if If you're undisturbed by Judaism presented as a mere mass of debased superstition.

Don't see it if Characters with no ethical center trouble you. Read more

See it if You care about Yiddish theatre IN Yiddish

See it if You are interested in Yiddish theater history. Interested in seeing Indecent and want to see the original play.

Don't see it if You don't want to see something in a different language. The subtitles were often not very good. Read more

See it if you want to see something classic, but fresh

Don't see it if you don't like reading subtites

See it if You have any interest in Yiddish theater and its history.

Don't see it if If you dislike theater in another language (Yiddish) ; plays deals with religion /hipocracy/sexual behavior...

See it if You love Yiddish theater, you want to experience Jewish playwriting from the early 1900s, you are interested in the Jewish underworld.

Don't see it if prostitution and ethically void characters depress you.

"'God of Vengeance' is a large, sprawling text, full of complex characters whose motives invite debate. In this, Asch's play embodies the best traditions of Judaism, along with the brokenness he sees in Judaism's most extreme forms....The New Yiddish Rep approaches the play with all the rigor and sensitivity of a Rabbinic scholar poring over a verse of the Talmud."
Read more

"'God of Vengeance' holds the stage formidably in its own right, primarily for its forthright depiction of the love between Yankl’s teenage daughter and one of the women who work in the brothel....Deftly directed by Eleanor Reissa, who is terrific in the role of Yankl’s wife...The production is somewhat cramped on the small stage at LaMaMa and the contemporary setting adds nothing much to the play. But the cast’s commitment brings the work’s flashes of lyricism to powerful life."
Read more

"While the tone of 'God of Vengeance' is over the top by today’s standards, it is fascinating from a historical and cultural perspective. While the kiss scene may no longer be shocking, much of the play is still provocative. In spite of an uneven ensemble and limited production values, the New Yiddish Rep’s production makes for heated and compelling theater."
Read more

"Though Asch's characters tend to be one-dimensional, his intrepid takes on religion, societal mores, and the evil that men do, still resonate…Asch's story has a sensational quality to it that, when combined with melodramatic scenes, sometimes approaches the comical...Reissa gives a wonderfully nuanced performance…Reissa directs the play with some restraint, but the built-in histrionics can't help bursting into the open now and then."
Read more

"Asch's dramaturgy is more than a little old-fashioned...and the play doesn't always get the help it needs from Reissa's direction. A particular disappointment is the Yekel of Shane Baker...Much better are Reissa...and Mandelbaum...Reissa has chosen to stage the production in modern dress, which is surely a mistake...Whatever this production's shortcomings, New Yiddish Rep has done us a favor by producing 'God of Vengeance,' and anyone who has seen 'Indecent' will want to check it out."
Read more

“Surprisingly, Eleanor Reissa's production for New Yiddish Rep has made some debatable choices which damage the power of the play. First of all and most obviously, although not a word has been updated, the characters wear contemporary clothing and use modern objects like headphones, a plastic umbrella and platform shoes. Since there are references to opening a horse stable and the sexual mores of 1907 have changed considerably, this is both distracting and confusing.”
Read more

"Even today, Asch's play is relevant and its core ideas are striking. This stage rendition loses some of Asch’s poetic, literary touches…I would like the moments between Rifkele and Manke to linger longer...The opening scene also does not capture the time and mood…Too many colors and styles in the costumes distract from the transportive power of the original text…I still think this is a play worth seeing and reviving, especially for its statement on religious hypocrisy."
Read more

"Thanks to excellent English super-titles and the body language and facial expressions of the cast, the thoughts and feelings of the shtetl Jews become real, personal and present...This production is exceptional because of Eleanor Reissa’s skill as both actor and director...Her work is elegant, unique, honest, radiant, and authentic; and her profound, understated direction shields the actors from the vengeance of melodrama by helping the cast present the characters’ complex layers."
Read more