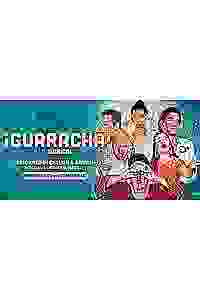 Adapted from the internationally acclaimed novel La guaracha del Macho Camacho by Luis Rafael Sánchez, ¡GUARACHA! is a new musical satire from Pregones/PRTT’s Latinx ensemble. The setting is an epic afternoon traffic-jam in mid-1970s San Juan, Puerto Rico. The sun is blazing hot and hit song “La vida es una cosa fenomenal” (Life Is A Phenomenal Thing) blares out of every car radio. A cast of wild, mostly lovable, and decidedly over the top characters —The DJ, The Senator, The Socialite Wife, The Son, The Mistress, and Doña Chon, the nosy neighbor— poke fun at a situation most messy, most sticky, and most certainly out of control!

See it if enjoy hearing and seeing true talent The acting, singing and dancing is amazing. The actor/ broadcaster has an amazing voice.

Don't see it if you can't make it during the short time it is playing.

See it if You like funny, dramatic, socially relevant theater all at once. I loved loved loved it! The music and acting were exquisite.

Don't see it if You are bothered by Spanish/English type of production. Translations are projected on the stage.

See it if If you’re ready to dive into Puerto Rico’s political and social climate. If you enjoy salsa, bolero, plena, disco & guaracha rhythms.

Don't see it if You like to overthink theatrical details. It’s a family show that has great music, very interesting characters with specific stories.

See it if Can’t imagine anyone enjoying this stupidity

Don't see it if Painful to endure.

CRITIC’S PICK "‘¡Guaracha!,’ Jubilantly Reclaiming Its Roots: This art form, which stems from a classic genre of protest song, gets a new spin in a musical by Pregones/Puerto Rican Traveling Theater."
Read more