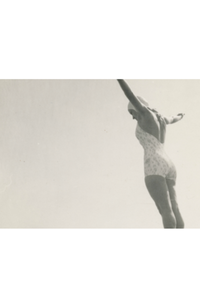 Lesser America presents a raw, darkly comic new play about the lovers we take to bed and the strangers we find there in the morning.

After a chance encounter in the bar of a bowling alley, two broken hopefuls share an electric evening. Bets are placed, shoes are lost, and booze is poured and poured. 'Half Moon Bay' is a funny and romantic exploration of our terrible decisions and the beautiful reasons we make them.

See it if you like short, romantic plays with perhaps a mismatched man and woman with two quirky but fine performances

Don't see it if some simplistic dialogue and situations turns you off, expect more action in plays you see, you're tired of the girl meets boy, etc. plot

See it if you want to see two exquisite performances by Gabriel King and Keilly McQuail. Also, terrific set design by Reid Thompson.

Don't see it if you don't want to be moved by a play.

"A sweetly caustic survey of contemporary relationships, pleasantly prickly until it turns unnecessarily serious...Under Jess Chayes’s direction, McQuail and King offer a clever and often funny study of modern courtship’s dance of approach and avoidance...In searching for dramatic obstacles, Mr. Moyer has to saddle each of them with a couple of past traumas, a device both heavy and hoary...Like many a date, what seemed so alluring the night before, palls the morning after."
Read more

"Dan Moyer’s two-hander is so un-insistently engaging, the actors’ embodiment of pursuer and pursued so appealing, that any concern about tired romantic tropes quickly dissipates...Analysis misserves the free-wheeling originality of this incipient (maybe) love story. The script, studded with amusingly offbeat asides, could play well in theaters across the country, especially in the hands of a director as deft as Jess Cheyes. It’s difficult, though, to imagine better enactors."
Read more

“Rarely falls into the easy mode of the typical romantic comedy, in which the characters spout lines that are far more clever than they are believable. Here the often-funny lines and sexy magnetism that emanate from Gabe and Annie are true to their characters….The production is helped in no small way by the wonderfully rich performances under Jess Chayes's direction; never for a moment do you doubt the honesty of their portrayals of these two struggling souls.”
Read more

"Moyer’s excellent dialogue contains so many sharp and wise lines that precisely delineate the characters. A great asset is that they’re spoken by two gifted actors who effortlessly make it appear as though that the play was written just for them…The chemistry between McQuail and King is instantly palpable and propels the play to its satisfying conclusion…Passionately written, presented and performed, 'Half Moon Bay' is a moving and entertaining treatment of Boy Meets Girl."
Read more

“The meet-cute is certainly not a new conceit and in the wrong hands could come off as tedious and clichéd. But playwright Dan Moyer brings a freshness to his take, combing humor with sexiness and pathos…Director Jess Chayes steers the flirtatious and bruising ballet with a light hand, maintaining a lively choreography, both verbally and in the constant advancing and retreating between Annie and Gabe.”
Read more

"Under Jess Chayes’ meticulous and spirited direction, Keilly McQuail and Gabriel King are the kingpins in this Lesser America production. Their emotional honesty is sometimes too much to bear...In those places where Moyer’s script falters, these two actors fill in the gaps with the grit of their formidable craft...'Half Moon Bay' is a testament to the strength of the human spirit and the unrelenting hope of finding salvation in the face of the other."
Read more

"The beginning of 'Half Moon Bay' does not promise a great romance. But it winds up delivering something almost as sweet – a charmingly-acted, quirky, subtly comic, touching look at the tentative, fumbling effort by two characters to make a connection...'Half Moon Bay' may not be a perfect – the characters’ interactions may not always be entirely believable, it may take a tad too long. But as imperfect as it may be, it deserves love."
Read more

"Moyer has written a play with brilliantly rich characters. They are authentic and real...Moyer has captured young people hookup culture yet found depth in the saga. His writing is snappy and accessible...Watching their journey provides an impeccable payoff...There is no denying the duo of 'Half Moon Bay' were magnetic. King as Gabe and McQuail as Annie were a quicky comedic duo with incredible harmony...'Half Moon Bay' is a special play. Lesser America has another hit on their hands."
Read more

"The very light and down-to-earth writing by Moyer makes you chuckle at times and laugh out loud at others...There is a strong magnetic bond between Keilly McQuail and Gabriel King, to which the audience gets drawn immediately...‘Half Moon Bay’ is full of poetry, which comes at you out of nowhere, and numbs your legs for a bit. Fresh, sexy and funny, some of these lines are still rolling in my head like a hard candy."
Read more

"Moyer has unfortunately chosen to give each of them deep secrets revealed late in the game that ultimately ring false. The show also suffers from an awkward act break...Despite these hiccups, Moyer’s script has a strong cinematic quality, with dialogue that accurately captures the complexities of a couples’ first night together...Of course, any two-hander is only as good as its actors, and McQuail and King have a strong stage presence while still being incredibly accessible."
Read more

"A dark and witty new play…Moyer’s intelligent yet poignant dialogue reflects what many go through at that period when a person realizes he or she is not a child anymore and is trying to play grown-up…Thompson’s set is utilized fully by director Jess Chayes; the actors improvise and evolve in their experience together, and ultimately connect in this mad, mad world. Starting out quick-witted and terse, the evening ends poignantly still and emotionally moving."
Read more

“Moyer has created a modern-day Frankie and Johnny that you hook into the moment we meet them. The play is filled with an easy humor...Jess Chayes directed the play with a wonderfully light hand, allowing her actors to find both the little moments and big revelations that draw you into them deeper and want to follow where they are taking us...More perfect casting could not be found than in Gabriel King and Kelly McQuail, the chemistry these actors have is so natural.”
Read more