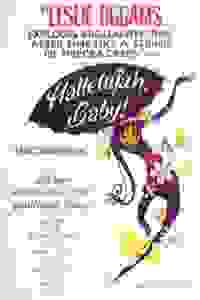 The York Theater Company presents a new staging of this 1967 musical, a chronicle of the African-American struggle for equality during the first half of the 20th century.

'Hallelujah, Baby!' tells of Georgina, an African-American woman on her journey to financial and social independence during one of the most tumultuous socio-political times in U.S. history.

The Musicals in Mufti Series presents three to five concert revival readings of underappreciated Broadway musicals for 10 performances each. "Mufti" means "in everyday clothes, without all the trappings of a large production," and each show is presented script-in-hand, with minimal staging.

See it if great singing, actors were all very good with good voices, nice staging with an economical space. Lead and mother great voices.

See it if to discover a Tony-winning, rarely produced musical, to learn about the AFrican-American experience over a century musicalized

69
Good production of a so so show

See it if You are fan of Jule Styne.

Don't see it if You don’t appreciate strip down revivals of old musicals.

See it if you consider yourself a serious student of American Musicals. This rarely seen piece by some masters of the craft deserves your attention.

Don't see it if you are weary of stories about the black experience.

Don't see it if you don't want to be preached in a show with some great songs, but overall is tired and lacks that magic we all love in musicals. Read more

See it if You want to hear a cast with amazing voices, to see an iconic show, to experience a "Mufti" show (a show street clothes) Really fun.

Don't see it if You expect Broadway budget as far as staging and costumes. You don't want to go the the East Side.

Don't see it if you need splashy Broadway musicals

See it if you want to see a brilliantly sung production of a rarely done musical. Umoh in particular is incredible.

Don't see it if you dislike the mufti setup, or are not a fan of musicals that deal with race and history. Read more

"Umoh delivers a confident and compassionate performance in that star-making role...'Hallelujah Baby!' is a bit of a curiosity in the history of Broadway musicals...An ambitious, but somewhat didactic attempt to create something that expands the boundaries of the art form to address contemporary issues...There are certainly better musicals about the black civil rights struggle in America, but it's still a valuable experience to attend imperfect shows."
Read more

"Time has not been kind to 'Hallelujah, Baby!'...None of this is a reflection on the performances at the York...But the minimalism requires us to focus on the material itself...Styne and Comden & Green have produced enough high-quality numbers that make the visit to the York well worthwhile to their legions of fans. But there is no getting around the timid approach to the subject matter. It was bad enough in the 1960s, but now it all just seems terribly condescending."
Read more

“While it is interesting to see Arthur Laurents' second thoughts on ‘Hallelujah, Baby!,’ his next to last original Broadway musical, the revised version is still something of a disappointment. It remains an ambitious failure with memorable moments.”
Read more

"When the York’s Producing Artistic Director James Morgan came on stage to introduce the show, he explained that the cast had only seen the material on Monday morning, six days before and only a splendid cast and great producing team could have accomplished this amazing feat in such a short time. Kudos to all at the York for this outstanding series that gives audiences the opportunity to see and hear both overlooked and celebrated musicals of the past."
Read more

"This show exudes Broadway...This upbeat musical tackles the sober topic of racism in America...With beauty, elegance, and a versatile, big stage voice, Umoh is razzmatazz in leading lady form...Some of the material feels a bit dated and the balance of book to music feels a bit off...Could use some judicious trimming. In addition, Georgina carries the majority of the show, in a veritable marathon of singing that risks wearing us out. Nonetheless, 'Hallelujah, Baby!' is a terrific show."
Read more

"Both problematic as well as a fascinating commentary on the complicated race relations that still plague our country...Umoh does an admirable job...The men fare less successful, if only for lack of chemistry with their leading lady...With another overhaul of Laurents' book, perhaps 'Hallelujah, Baby!' might find its footing. Until then, there are gems in the score...as well as the reminder that as far as we've advanced in racial equality, the journey is far from over."
Read more

"There are various reasons to see the York Theatre Company’s concert-style revival...A major one is the smashing performance by Stephanie Umoh...Seeing her reconfirms my enthusiasm for her artistry...The show itself has an excellent score...It is a work that definitely merits a fresh look...The book, although sometimes a bit clunky, cleverly spans decades...The overall direction is by Gerry McIntyre, who deserves credit for whipping the musical into shape with about a week’s rehearsal."
Read more

"Umoh has a powerful, clear voice...Convincingly frustrated, selfish and aggressive...Seems to add pith to the show...Sessions' Harvey is believable from the get-go...Brings authenticity to every speech, glance, and song...Fine vocal style and is thoroughly appealing...Director McIntyre is adept with both vivacity and gravitas. Choreography is appropriate and fun; emotional moments theatrically credible."
Read more

"The show certainly has its heart in the right place...But that’s just the problem: it drips with liberal guilt...'Hallelujah, Baby!' also fails in terms of basic storytelling...The show comes off as both plodding and didactic...Manufactured plot complications seem to arise and abate...robbing the story of dramatic build...Conflicts arise without a clear reason...and the characters feel like ideas rather than people...Fortunately, the cast helped make the proceedings a good deal less painful."
Read more