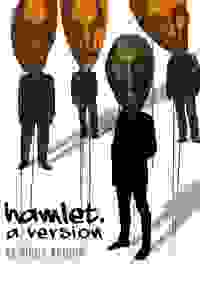 Red Lab Productions and Roust Theatre Company's take on Shakespeare's tragedy shifts the focus from the title character to the intrigue, opportunism, and political scheming of a burgeoning police state.

This starkly realized new world order—insidiously ushered in by murderous and destabilizing tactics—provides a whole new meaning to the phrase ‘something is rotten in the state of Denmark.’ From a curiously flat-footed Hamlet and a self-aggrandizing ‘Polonius the First,' to the questionable death of the old king and a torrid affair between Gertrude and Claudius, Boris Akunin’s 'Hamlet: a Version' provides a radically prescient perspective on a contemporary political issue: How to eradicate the old to make way for the new.

See it if You want to see a play that rewrites Hamlet. Shakespeare has nothing to worry about.

Don't see it if You think there is no need to alter Hamlet.

See it if you don't have a preconceived notion of what Hamlet should look like on stage; you like your Shakespeare to be entertaining and accessible.

Don't see it if you want to hear the original text - this isn't that, which is to this production's benefit imho but YMMV. Read more

See it if ..you like alternative history or detective novels. The show is worthy and only 1h 40min and $18 so perfect for an affordable night out

Don't see it if ..you think Shakespeare is sacred. You don't like CG scenery.

See it if It is like no other play running in NYC now. It is a fresh, compelling take on HAMLET. A gorgeous production.

Don't see it if There's no reason not to see it. Check it out before it closes.

See it if The production is a great combination of traditional theater and technical innovation.

"At 100 minutes, there is little plumbing of Hamlet’s psyche in this exceedingly handsome, surface-skimming production...The play flits quickly from one scene to the next like a 'Hamlet' highlights reel. For Mr. Akunin’s witty variation to work, the performances need to have some depth, yet Horatio is most of the time the only vivid presence...Crowding out characterization, Ms. Gachechiladze makes design the real star...The scenes that play out before them, alas, are too often dreary."
Read more

"Striking presentational elements, terrific direction, fine performances and an interesting concept all make 'Hamlet. A Version' moderately entertaining...The English translation is problematic...It’s rather stilted. Without much verbal grandeur there’s a prevalent flatness...Director Irina Gachechiladze’s staging is lively, swiftly paced and has an artful precision...Though not as profound as its goal wants it to be, 'Hamlet. A Version' is a worthy diversion."
Read more

"Unfortunately, the design takes one step beyond the text, making a big reveal in the end rather disappointing. Throughout the show, a cast of nine fine actors seem unsure of what they are doing...As a theatrical event, 'Hamlet. A Version,' is an undercooked dish. But the ambitious and fresh interpretation of the classics, slick minimalistic design and potent cast make for good ingredients and hold the show afloat."
Read more

"Akunin has committed the cardinal sin in the world of Shakespeare: he has not only significantly altered the story line of arguably the greatest play ever written, but he has added his own words!...This is the most shocking and ill-conceived production that makes use of the hallowed name of Hamlet I hope to ever witness...The 'familiar' characters have been stripped of their depths and dimensions...Feels like a 'Saturday Night Live' skit that’s so weak it runs in the last ten minutes."
Read more

"Akunin reworks 'Hamlet' to such a degree that it becomes a new story, with new dialogue, new characterizations, and new takeaways...Akunin’s script is dazzling, and his new (or should we say alternate?) 'Hamlet' is a breathtaking journey: full of wit, humor, tragedy, and twists. If you go in expecting to see a purist staging of Shakespeare’s 'Hamlet,' you might be disappointed. But if you let Akunin’s reimagining sweep you up in its magic, you’ll have the ride of your life."
Read more

"Probably the most intriguing version of 'Hamlet' I have ever seen...Akunin highlights and creates new motivations for the characters, making every character much stronger and more interesting than originally written...On the whole, the cast is so easy to watch that we are swept into their characters immediately...'Hamlet. A Version' is politically relevant, entertaining, and intriguing...Overall, this reworking of a well-known story is riveting."
Read more

"Akunin has done some interesting things with the language: he uses the cadence and energy of Shakespeare’s text to create the dialogue for the play. As a result, it sounds Shakespearean, even if it isn’t...The play, although condensed to 90 minutes with a pared-down cast of characters, for the most part captures much of Shakespeare’s story...Akunin explores Shakespeare’s 'Hamlet' in a nuanced way that leaves an impression that remains long after the show is over."
Read more

“The witty and sharp language comes from a writer particularly sensitive to political upheavals and crime…The overly flowery language of the time suits this environment unexpectedly well—particularly the Queen (played by Joy Hermalyn to delightful doting and reflective effect)…The work will leave you chuckling and considering ‘Hamlet’ in a technocratic light…The end seemed a little too tidy—but maybe that’s exactly the way it should be: a job well done.”
Read more