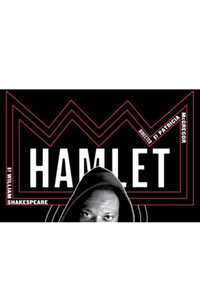 Iwuji ('Henry VI Trilogy,' 'King Lear' at The Public) plays the anguished Prince of Denmark who is confronted at every turn with a poisonous power structure that's robbed him of his father, and forever darkened his understanding of the world. Patricia McGregor ('Hurt Village,' 'Ugly Lies the Bone') directs this bold take on Shakespeare's immortal tale about family, deceit, and the explosive consequences of unchecked corruption. The production tours to local community centers, prisons, and homeless shelters before ending its run at the Public.

See it if you know Hamlet and are open to a new take. The emotional core is powerful, but much material is cut. Iwuji (RSC trained) is great. Intense.

Don't see it if you hate WS abridgement, but I love the Mobile Unit productions. Not all the actors shone, but Iwuji did. The time flew by; no boredom.

See it if you want to see some really exciting performances, particularly by Kristolyn Lloyd and Christian DeMarais.

Don't see it if you struggle with Shakespeare when the production doesn't make it a point to help you with the language.

See it if You do not mind an abridged version of a classic Shakespeare play performed by actors in modern dress. Many familiar soliloquies included.

Don't see it if You are a classicist. Hate muti-roles Need elaborate sets Cannot sit for a continuous 1 hour 45 minutes Read more

See it if You enjoy Shakespeare and the always talented Mobile Shakespeare crew. The acting is superb, the story classic. Only downside was the length

Don't see it if You are used to the MSU making Shakespeare manageable. Hamlet is a long play, and it still felt long even performed by the MSU.

See it if You like to see Shakespeare done anew. Chukwudi Iwuji is mesmerizing with so many colors I was constantly surprised. He is 100.

Don't see it if you are too distracted by others in the scene overacting, you dont like your Shakespeare sprinkled with rap, and song. Read more

See it if you want to see how a Classic can be updated and abridged without losing it's relevance or importance.

Don't see it if only if you must experience Shakespeare in it's purest form.

Don't see it if You are a Shakespeare purist

See it if You want a well abridged version of Hamlet with some smart choices and clear connection to today (+ excellent Polonius).

Don't see it if You're annoyed by shouty actors. You dislike theatre in the round staging that isn't always attentive to sight lines.

"Purists may squawk, but many a time-pressed theatergoer can appreciate a smartly condensed Shakespeare play...Certain performers, such as Royal Shakespeare Company vet Chukwudi Iwuji in the title role, are highly effective; others appear randomly recruited and out of their depth...Iwuji is worth many times the price of admission...Some of the contemporary touches pay off with laughs."
Read more

"'Hamlet' boasts outstanding performances and an intelligently pared-down version of Shakespeare's longest play that speaks frankly to the rottenness of our time...Performed in the round with a simple, efficient set, this production pulls the play out of the past...Iwuji is in charge the rest of the time with his ferocious performance...It's to the Public's credit that it has used Shakespeare's classic tragedy to contribute to a dialogue about the violent tragedies of our day."
Read more

"While the Black Lives Matter movement is never directly addressed, Iwuji's captivating performance as the prince reflects the evolution of emotions when feelings of being helpless to combat the power of authority grow into a passion to topple the system...With a fuller text, McGregor might have delved into more details, but the demands of Mobile Unit productions generally limit storytelling to the main plot points. The fine ensemble includes standout performances by Lloyd and DeMarais."
Read more

"'Hamlet' holds together well enough as a lean-and-mean story of familial intrigue, and for those who have no other easy access to the play, it's no challenge to imagine many a worse one. But for veterans, what you get doesn't compensate for what you lose. The societal and political context that can make this play unapproachable are critical parts of what it gives it that extra titanic dimension above and beyond even Shakespeare's other masterpieces."
Read more

“The verdict is that this is exciting and vigorous theater at its best. Cut by half, this modern dress production directed by Patricia McGregor runs a brief 100 minutes without an intermission and is easily accessible to all ages. Made up of a cast of nine playing all of the roles, and with minimal scenery, this abbreviated version will at times leave you breathless but will command attention at all times.”
Read more

"When you have not only a stunning performance from the likes of Chukwudi Iwuji—who seems born to play the part—but a full cast of actors in their element, the full force of this, arguably the best play ever written, is overpowering...It’s the play’s mobility that makes its reliance on a stellar cast and precision direction (Patricia McGregor) paramount...To end this run forever after two weeks in residence would be an actual tragedy."
Read more

"McGregor has whittled down the behemoth to two hours. She has jettisoned Fortinbras, ruthlessly cut and trimmed scenes, and greatly ratcheted up the tempo. What's more, a surreal prologue that packs a real emotional wallop has been added...No question Iwuji is the star here. His rendering of the verse is superb, with his voice going from a stage whisper to a stentorian shout in a wink...While Iwuji is mesmerizing, there are others in the cast who also deserve kudos."
Read more

"'Hamlet' is a great story. A great story of revenge, heartache, betrayal. And the Public Theatre’s Mobile Unit is great storytelling. Their bare-bones attack on the play allows for the words and emotions to rise to the top...Chukwudi Iwuji’s Hamlet is a force to be reckoned with. He fills the room with his heartache, his anger, his confusion...The cast eats the space up with their teeth, their hands, their nails, biting and clawing their way through the story."
Read more