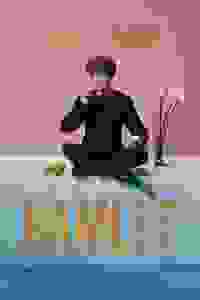 This production, playing in repertory with Aeschylus’ 'Oresteia' with the same cast, adapted by Robert Icke, incorporates digital media in a modern staging. It's the first time the two plays will be performed in rep, allowing audiences to see the connections in the classic plays written over 2,000 years apart.

This is the North American premiere for this production of 'Hamlet' that premiered at the Almeida Theatre in London. Icke stages Shakespeare's play like a psychological thriller.

Alex Lawther, who stars as Hamlet, is known for roles in 'Black Mirror,' 'The End of the F***ing World,' and 'The French Dispatch.'

See it if you wanna try a modern costume/setting Shakespeare.

Don't see it if Hamlet speaks so slowly that you can't help but wonder if her's trying to remember his lines. Weird direction on that. Overall lackluster

See it if You want to see a modern production of Hamlet with the original language.

Don't see it if I wish it had been shorter. It’s slow & 4 hours is too long. Handfuls of people left in the middle of 1st act. More at intermission. Read more

See it if You want to experience Hamlet like you’ve never experienced it before. Fresh, modern, breathtaking! Great acting! Brilliant staging!

Don't see it if At just under 4 hours it may seem daunting. Don’t let the length deter you. Every minute was worth it. If you’re a purist brace yourself. Read more

See it if This Hamlet is long but excellent. Great direction, staging and acting. Must see!

Don't see it if It is long. If you do not like modern made Shakespeare

See it if you'd like to enjoy a new staging with clear sound, well-directed on a dazzling set with great multimedia to enhance your understanding.

Don't see it if you are a Shakespeare purist or do not like grand scale productions that last nearly 4 hours.

Don't see it if you are expecting the Hamlet you studied in school. Many audience members left during the intermissions.

See it if for unique take on a sleek but long Hamlet, excellent performances by mostly British cast esp. Alex Lawther in title role, exciting staging

Don't see it if lengthy plays, have difficulty with Shakespearean language, don't like suggestive setting, having to listen

87
Director puts stamp on, One of will's iconic tragedies

"'Hamlet' is one of the Shakespeare plays that most suffers from diminishing returns — adaptations that try too hard to innovate, to render a classic modern and hip. Though Icke’s protracted production occasionally falls into that trap, ultimately the creative team’s visual and technical prowess — along with its provocative young lead — make this a tale of musing, mania and murder for our age."
Read more

"For nearly all of the production’s three hours and 45 minutes, this sort of sound insists on reminding us that 'something is rotten in the state of Denmark,' hammering a nail that has long since been walloped flush."
Read more

"Ultimately the effectiveness of any 'Hamlet' must reside with the actor playing the title role, and here the results are mixed. As noted, Mr. Lawther’s Hamlet is an antic brat in the early acts, and his recital of the verse largely fails to transmit its lyrical beauty. But by the end of the play, notably in the graveside scene, Hamlet seems to have grown before our eyes to emotional and intellectual maturity."
Read more

"Lucid interpretations of the text and committed performances support a strong directorial vision, which situates itself at the newsworthy intersection of mental health and firearms. Icke's Hamlet would seem to have everything going for it — so why does it feel like such a slog?"
Read more

This is an up-to-the-minute Hamlet, cool to the touch but roiling with powerful emotions hidden behind an engineered façade of propriety.
Read more

"This is a production that mixes art with artifice, with an overlay of quirky design elements that, even when they clash with the onstage action, rarely fail to engage."
Read more

"To be or not to be an exhilarating, respectful Hamlet, that’s the question improperly answered through the tragedy’s reappearance. “Remember me,” the Ghost exhorts. Not this time."
Read more